The high-pitched screech of the Blue Jay fills the autumn air as these colorful relatives of the crow gather nuts.

Their loud calls are no doubt warnings for others to keep away. The cries often mimic hawks, thus frightening others into thinking a predator threatens.

Writer Edwin Way Teale observed that not only birds, but also

squirrels, muskrats, and rabbits hide when they hear the war-cry of a Blue Jay. For the jay, that’s important. Like the squirrels, jays collect and store nuts for winter dining. In fact, they far outstrip the Gray Squirrel in nut-gathering capacity and in the process, wind up planting more trees than their furry neighbors do. Naturalist M. R. Chettleburgh found that during the single month of October, 30 to 40 jays can gather and plant more than 20,000 acorns, hauling them up to three-quarters of a mile from the mother tree.

Thus, the jay has learned that to win in the war of food gathering, you’ve got to talk tough, not necessarily be tough. You might consider him a politician of the bird world.

Each September some seem surprised at the “disappearance” of the squirrels. Those rodents that pilfer our birdfeeders and seem bent on running under our tires are suddenly gone from sight.

The squirrels haven't really disappeared. It is harvest season and, hidden in the leaves of oaks, beeches and hickories, squirrels are overhead, gathering ripe nuts fresh off the branch. Yes, they consider your birdfeeder a second-rate source of food. Fresh nuts will always win out.

The puzzlement over the “lack” of squirrels points out a failing many of us have as backyard naturalists. We don't look up.

Dozens of creatures stare down at us as we go for walks, but we rarely see them because our eyes are turned to the ground. Look up and you may see a raccoon mother leading her babies along a limb, a flock of wild turkeys sunning themselves, or an owl eyeing dinner. Look up and you may see a Sharp-shinned Hawk in hot pursuit of a blackbird or a pack of crows mobbing a fleeing Great Horned Owl.

Not only life, but adventure can be found overhead.

Time of much freshness

September is the month of summer’s last fling and winter’s first beckoning, a time when the thermometers might hit 90, yet when you could find the first frost on your lawn.

September’s average high temperature is 74, and low, 50, a range that many would consider just about ideal. But records for the past 20 years show September’s possibilities for extremes: 100 and 23 degrees. The average first frost here is around Sept. 22, the same day this year on which autumn arrives.

September has also been a dry month, averaging only 3.8 inches of rain over the past two decades, one inch less than August or July, or even November. It also has averaged fewer rainy days than any other month – just six.

While that dryness may desiccate lawns and strain wells, September’s weather is about the best that our part of the world has to offer. Many sunny days that are crisp, yet mild, make for great times outdoors. No wonder the Mohawks called September’s full moon Seskhoko-wa – “time of much freshness.”

Nature comes in many flavors, and on a crisp September morning, you're apt to happen across the spicy scent of anise. 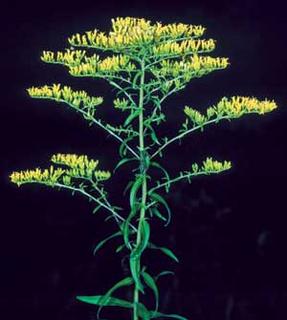 The licorice-like smell is from the Sweet Goldenrod, whose bright plumes join more than two-dozen other goldenrod species to paint fields and roadsides yellow and gold each fall. But Sweet Goldenrod does more than delight the eye and tickle the nose. It might even be considered a patriot.

Back during the Revolution, when the supply of tea from the “motherland” was cut off, colonists turned to native plants to produce a hot beverage. Called Blue Mountain tea, the brew made from dried sweet goldenrod flowers and leaves was a tasty substitute for Chinese varieties.

And it may be good for you, too. Goldenrods have long been used as tonics and medicines. In fact, their scientific name, Solidago, means “to make whole” or heal.

September, the ninth month, is named the seventh. But it might have been called August, were it not for July.

In ancient Rome, when the year began in March, September was the seventh month and had 31 days. The emperor Augustus decided he was important enough to warrant a month to honor him, just as Julius Caesar had July named for him. Julius’s honor came posthumously, but Augustus was not about to let death rob him of enjoying his tribute.

Augustus should have picked September, his birth month, just as July was Julius’s. But Sextilis, the sixth month, was next to the month of his famous predecessor. Besides, Sextilis had been a lucky month for him, so he renamed it instead. But Augustus didn’t want only 30 days when Julius had 31, so he added a day to August – and took one from September.

In naming their months, the practical and thirsty Saxons were not interested in self-aggrandizement. September was Gerst monat, the barley month, named for the crop harvested then and the chief ingredient in their favorite beverage: Beer.