Bird watching can be a lot more than just identifying what shows up in the yard. A good bird watcher also notices what the birds are doing.

Nine-year-old Blythe Filaski of Ridgefield is a good bird watcher. “Recently, I spotted two nuthatches on my pear tree,” Blythe writes. “The nuthatches must have been mates, because their bills were together, almost as if they were kissing. I think they were sharing seed.” 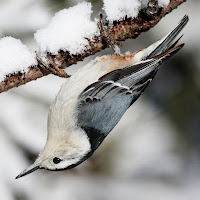 Blythe was lucky enough to observe an interesting courtship behavior of the White-breasted Nuthatch. Here is how Arthur C. Bent described a pair of nuthatches 60 years ago:

“All through the winter the pair has lived not far apart, feeding within hearing of each other, but the male has paid little attention to his mate; in fact, on the food shelf, he has shown dominance over her; but now in the lengthening, warmer days of spring, he becomes actively engaged over her comfort.

“A real courtship begins: He carries food to her and places it in her bill, he stores bits of nut in crevices of bark for her convenience, and he often addresses his singing directly to her. Standing back to her, he bows slowly downward as he sings, then in the interval before another song he straightens up, then bows as he sings again. The songs come with perfect regularity over and over again and can thus be recognized even in the distance as the courtship song.”

Ornithologists have been fascinated by this behavior in many species, including cardinals and hawks. Of course, on the simplest level, it can be taken as a way of wooing a mate by making her happy – just as men often take women out to dinner on dates.

However, scientists see more in the behavior. The food exchange not only develops pair bonding, but may also help convince the female that her mate will be a good provider during the forthcoming nesting period.

“Increasing evidence suggests that females who receive more food from their mates lay larger clutches” of eggs, wrote David W. Winkler, in Handbook of Bird Biology (Cornell Lab of Ornithology, 2004). “Mate feeding probably makes it possible for a female to raise more young, by keeping her in good condition and allowing her to put more energy into feeding the young.”

In other words, a nice dinner now may mean more and healthier kids later.
So, for the nuthatch and many other species, “the way to a woman’s heart is through her stomach.”

Birds hitting windows is a common problem. Depending on the lighting, a window – even a relatively small one – can behave like a mirror. A bird in a hurry, such as one threatened, can mistake the window for open spaces. 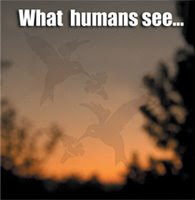 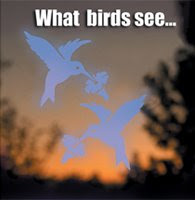 With most household windows and doors, a crash happens only rarely, if ever. However, if you have windows – particularly picture windows – that birds regularly collide with, consider a product like Window Alert. These are plastic decals that are virtually invisible to humans on the inside of the house, but are very visible to birds on the outside.

According to the manufacturer, “The decal contains a component which brilliantly reflects ultraviolet sunlight. This ultraviolet light is invisible to humans, but glows like a stoplight for birds.”

The product functions sort of like those advertising coatings that you see on commercial vans and city buses that cover not only the metal surfaces of the vehicle but also the windows. People inside can see out perfectly well, though from the outside the window looks like part of a sign.

The decals, which come in various shapes including leaves and snowflakes, are sold in many stores that serve bird watchers and feeders. For more information, see windowalert.com.
at March 19, 2009 11 comments:

The striking Rich Josephs photograph of this of a Red-tailed Hawk consuming a crow is a dramatic example of why hawks and other raptors were once hated and hunted. Hawks, owls and eagles feed on a variety of birds and smaller mammals. For hawks and owls, at least, mammals and birds are their primary source of food. 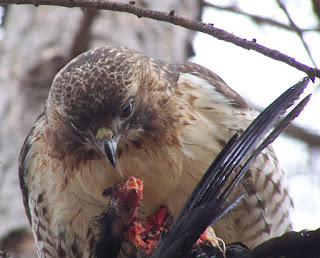 Catching squirrels, rabbits, mice, and birds in the wild is often not easy, and requires skill, stealth and timing. More often than not, the raptor is unsuccessful and the prey escapes.

When farmers took over much of the landscape in the 18th and 19th Centuries, they eliminated some raptor prey, but also introduced others. What’s more, some of the new fare were easy pickings.

Chickens were so popular with some hawk species that any hawk that attacked domesticated fowl was called a “chicken hawk.” However, the Red-tailed Hawk was probably what farmers saw most, and was the most feared “chicken hawk.”

In a way, this is unusual. Red-tails are not true “bird hawks.” Many Accipiters like the Sharp-shinned and Cooper’s Hawks feed primarily on birds and are designed to catch them on the wing – they are smaller, sleeker and have long tails that allow them to maneuver quickly. By comparison, the bigger Red-tailed Hawk is not as agile. It can catch an occasional crow or waterfowl, but it’s unlikely a Red-tail could nail the chickadee or titmouse that a Sharpie can catch.
When the European farmers arrived, they provided virtually flightless fowl to the native raptors. Domesticated chickens were slow, fat and tasty. It was Red-tail heaven – until the farmers got good guns. Hawks were treated as vermin, bounties were paid for their bodies, and countless numbers of them were killed.

Even in modern-day Ridgefield, “chicken hawks” are at work. Last fall, we got a call from Wendy Llewellyn who had recently returned to maintaining full-sized, egg-laying chickens at her home. One day, “they were making strange noises,” she said. She looked outside and “there was what I assume was a hawk, trying to take off with one of them,” Wendy said. “I ran out and the hawk dropped the chicken.”

A week earlier, her cat had been limping. “When I brought her to the vet, he said she looked like she had been in a fight and was covered with lacerations,” Wendy said, wondering whether it was a tom cat – or the hungry hawk.

Small mammals are the main fare of the Red-tail, our most common hawk, and if the opportunity arises, the Red-tail may attack small dogs and cats.

“Large raptors, such as Red-tailed Hawks and Great Horned Owls, can indeed kill a small pet,” says Hawks Aloft, a raptor conservation organization. “We have received dozens of inquiries about six-pound dogs, ten-pound dogs, etc., all the way up to a 60-pound dog. There is no specific cut-off weight at which your pet’s safety is guaranteed. If the size of your dog or cat is similar to or not much larger than naturally occurring raptor prey, there is a risk.”

Early one morning a couple years ago, I was walking our nine-pound Chihuahua, Charley, down the road when suddenly I saw a Red-tail flying straight at us, only about eight feet off the ground. I am sure he was eying Charley, who was about 10 feet ahead of me on a leash. However, as soon as the hawk noticed me, he veered upward and headed off into the woods.

We never leave Charley alone in the yard. He and any other small dog or cat could be lunch for not only large raptors, but coyotes, the recently reintroduced Fishers (large, mammal-eating weasels), perhaps foxes, and maybe even cougars (reliably sighted in Ridgefield last year).

So keep Fido and Kitty indoors or under surveillance.
at March 16, 2009 1 comment: