When an enemy approaches, many birds react with a technique called “mobbing.” Crows are famous and vociferous mobbers, ganging up and screaming at hawks or owls.

For years, scientists considered this mostly a method of chasing away predators.

The curious Curio concluded that mobbing blackbirds were acting as tutors, teaching birds to “know thine enemy.” So the next time you see a dozen crows mobbing a hawk, you may actually be witnessing a big outdoor seminar.

To feed or not to feed

Each spring, many people take down their feeders for the season. There is plenty of natural food around, they figure, so why spend money on seeds? 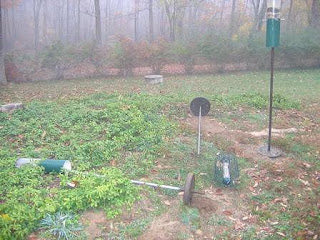 Actually, plenty of food is almost always. Except in the direst conditions, such as a blizzard with deep snow and subzero temperatures, year-round birds can find enough food to survive our winters; otherwise, they wouldn’t be here in cold season.

For the birds, our feeders are added conveniences, be it summer, fall, winter or spring. For us, they are entertainment, as well as a source of knowledge about the wildlife around us.

The truth is, we feed the birds because it’s fun, not because they need our food.

However, there are arguments for not feeding in the early spring through late autumn. One arrived last week in the form of a warning from the Connecticut Department of Environmental Protection: it’s Black Bear season.

Bears have emerged from their winter dens and are wandering the countryside, looking for food and mates. Bird seed at feeders (along with garbage cans and outdoor grills) attract them.

Black Bears are shy and rarely get involved with humans. Some people would consider a bear in the yard exciting, but others would rather see these critters, weighing hundreds of pounds, only in a zoo. If that’s you, take down your feeder now.

Another problem with year-round feeding is disease. Warm weather can exacerbate the transmission of diseases, especially those involving bacteria like salmonella. Disease can come from seeds on the ground that develop molds and/or that have been tainted with feces.

Safe, warm-weather feeding requires maintenance: regular cleaning of the feeders as well as of the ground beneath them, especially if you use seeds with shells.

Some people don’t put out feed in the summer and fall because they think it will delay the departure of migratory songbirds, which may then perish in cold weather. However, scientists believe the changing length of the day – more light in spring, less in fall – triggers migration, no matter how much food is available locally.

Yard aficionados who like their lawns to look like putting greens eschew warm weather feeding, especially with sunflower seeds, because of the mess it can make. The husks of whole sunflower seeds, for instance, contain a poison that kills grass.

On the plus side, attracting birds to the yard in summer helps control many kinds of pest insects.

Bird-feeding in warm weather pretty much boils down to whether you want to do it, can afford to do it, and are willing to do it safely. If you are neat, clean and aren’t afraid of bears, feed on!

We've gotten many reports of Pine Siskins this winter and early spring. The incredible irruption of these northern birds into southern territories is like none in recent years, and siskins are still here as of April 7. 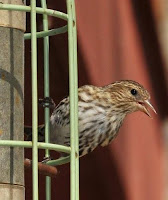 But this big crowd of birds has brought with it a problem – aside from breaking our birdseed budgets with their gluttonous consumption. Siskins may be prone to disease.

Kathy Cory of South Salem, N.Y. tells us, “I noticed a lethargic siskin in the yard this morning, which perished soon after. That's the second dead one in the yard this week, and I remembered seeing another sickly one a few weeks ago.

“I have learned that they are very susceptible to salmonella, possibly from dirty bird feeders. Since all of us have had very busy bird feeders this winter, perhaps we need to be more diligent than usual about cleaning them. Could it be the feeders or is there another force at work out there?”

On the Connecticut bird hotline, sick siskins have been a hot topic.

Julie Keefer of Lyme said there were “a lot of reports of siskins dying in North Carolina this winter and I think it was pretty much a mystery as to why.” She wonders whether the ones succumbing here caught their fatal disease in the South – the ones we are seeing now may be migrating north and are not necessarily the same birds that were at our feeders in winter.

Paul Carrier, a Harwinton naturalist and wildlife artist who found dead siskins in his yard recently, said, “As we feed the birds from the same feeders continually in one spot all winter, it is not natural. The accumulation of husks and spillage under the feeders will eventually become a breeding ground for molds and disease, especially as it gets warmer. We all must clean up under the feeders as much as we can now that it’s warmer out.”

Paul added, “thistle is a very fast decomposing seed (husks), especially when wet. These I believe are the culprit to the sickness in these siskins, especially when they eat them from the ground. When it is cold, the seeds don't grow molds and such. But when wet and warm, they become instant breeding grounds for disaster!”

Cornell Lab of Ornithology’s Project Feeder Watch has been getting many similar reports. “As often happens in birds that feed and roost in tight flocks, there have been outbreaks of salmonella reported in some Pine Siskin flocks,” Cornell said. “Salmonellosis is caused by a bacteria... It is a common cause of mortality in feeder birds, but the symptoms are not always obvious. Sick birds may appear thin, fluffed up, and may have swollen eyelids. They are often lethargic and easy to approach. Some infected birds may show no outward symptoms but are carriers of the disease and can spread the infection to other birds.”

Salmonellosis is mainly transmitted by fecal contamination of food and water by sick birds, though it can also be transmitted by bird-to-bird contact, Cornell says. Occasionally, outbreaks cause “significant mortality.”

Cornell says, “Clean your feeders about once every two weeks, more often during times of heavy use. For best results wash your feeder thoroughly in soapy water, then soak or rinse it in a solution of one part bleach to nine parts water. Dry the feeder thoroughly before refilling.”

One hotline participant said sunflower chips, which siskins love, have the advantage of not having hulls to get moldy and diseased on the ground.
at April 09, 2009 No comments:

The threats to birds

Nearly a third of the nation's 800 bird species are endangered, threatened or in significant decline due to habitat loss, invasive species, and other threats, says a new report on bird populations.

"Just as they were when Rachel Carson published Silent Spring nearly 50 years ago, birds today are a bellwether of the health of land, water and ecosystems," said U.S. Secretary of the Interior Ken Salazar in releasing The U.S. State of the Birds, the most comprehensive study of its kind.

"From shorebirds in New England to warblers in Michigan to songbirds in Hawaii, we are seeing disturbing downward population trends that should set off environmental alarm bells. We must work together now to ensure we never hear the deafening silence in our forests, fields and backyards that Rachel Carson warned us about."

The report also said habitat restoration and conservation have reversed previous declines in many species of waterfowl, such as pelicans, herons, egrets, osprey (pictured above), and ducks.

"These results emphasize that investment in wetlands conservation has paid huge dividends," said Kenneth Rosenberg, director of conservation science at the Cornell Lab of Ornithology.

"Now we need to invest similarly in other neglected habitats where birds are undergoing the steepest declines."

The report combines data from three long-running bird censuses conducted by thousands of citizen scientists and professional biologists. It indicates a 40% decline in grassland birds over the past 40 years, a 30% decline in birds of aridlands, and high concern for many coastal shorebirds. Also, 39% species dependent on U.S. oceans have declined.

Dr. David Pashley, American Bird Conservancy's vice president for conservation programs, said, "In addition to habitat loss, birds also face many other man-made threats such as pesticides, predation by cats, and collisions with windows, towers and buildings. By solving these challenges we can preserve a growing economic engine – the popular pastime of bird watching that involves millions of Americans – and improve our quality of life."

Surveys conducted by the U.S. Fish and Wildlife Service and U.S. Geological Survey, including the annual Breeding Bird Survey, combined with data gathered through volunteer citizen science program such as the National Audubon Society's Christmas Bird Count, show once abundant birds like the Northern Bobwhite and Marbled Murrelet are declining significantly, and may become extinct.

"Citizen science plays a critical role in monitoring and understanding the threats to these birds and their habitats, and only citizen involvement can help address them," said National Audubon Society's Bird Conservation Director, Greg Butcher. "Conservation action can only make a real difference when concerned people support the kind of vital habitat restoration and protection measures this report explores."

The report is available at www.stateofthebirds.org.
at April 03, 2009 No comments: