“Do phoebes raise more than one brood a season? asks Flo Vannoni of Redding.

“A pair of phoebes nested over our sliding door and succeeded in fledging three babies,” she writes. “The babies left the nest about one week ago and since then, we had not seen parents or babies. Today one of the parents returned to where the nest had been – I had removed it. Is it possible they would start another nest?”

Many species have more than one brood in a season, as Mary Walsh of Ridgefield – who sent the accompanying shot of a second-brood bluebird chick – can attest. 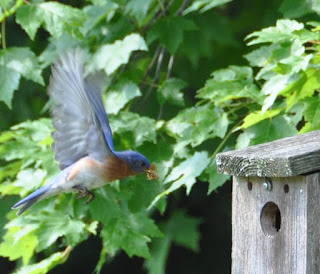 “The baby bluebirds fledged last week from a nesting box on my property,” Mary wrote July 14. “It is the second brood this summer.

“I found one baby hiding out on the running board of my Sequoia. As I tiptoed within a few feet, the baby bluebird hopped away. It appeared to be struggling to fly… Mom and Dad were in the trees chirping away. I had to leave and he was gone when I returned home. I hope he took flight.”

Flo wondered whether her phoebes would start another nest. They probably would, and perhaps in the same location since they would likely have used the old nest a second time.

Eastern Phoebes are very loyal to nesting location. They not only use the same nest for their two broods in a season, but also tend to re-use it for several years. That is relatively unusual among songbirds, most of whom build new nests every year. Phoebes simply make repairs and spruce up the previous year’s nest – “waste not, want not” is apparently the motto of this avian recycler.

For many songbirds, whose offspring hatch relatively quickly and don’t take long to fledge, having two broods in a season in this part of the country is normal. There is plenty of time to raise two families, and then fatten up for the migration south or, for many year-round species, to stock up on food for the winter.

Studies have found that northern birds of a given species tend to have fewer broods than southern birds, yet all produce around the same number of young per season.

In the North, for instance, Eastern Bluebirds typically have two broods. In the South, because the warm, insect-filled season is longer, bluebirds often have three broods.

Did the southern birds work harder? They had more nestings, but fewer mouths to feed at each. Moreover, they probably did not migrate as far, if at all, to set up home.

(Photo of bluebird parent arriving with food for babies is by Kevin M. Doyle.)

You can find them in hanging flower baskets, an old boot, a garage shelf, or under a bridge -- birds build nests in the strangest places, note the folks at Cornell Lab of Ornithology. As part of their Celebrate Urban Birds project, the Lab is sponsoring “Funky Nests in Funky Places!” competition. 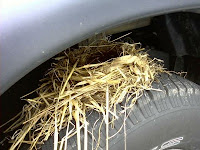 Celebrate Urban Birds is a free, year-round citizen-science project, focused on birds in neighborhood settings. While we are much more “suburban” than “urban,” Cornell points out, “We will gladly accept data from all locations, including suburbs, small towns, small cities, as well as large cities. It is exciting for us to receive data from a large variety of ‘Green Spaces.’”

For the Funky Nests in Funky Places challenge, the lab wants you to take photos, do a painting, write a story, or shoot a video showing a bird’s nest built in some out-of-the-way or out-of-this-world place. “When observing nests please be sure to avoid touching them or disturbing the birds,” Cornell adds.

There are prizes for the best shots, including a Leica C-Lux 3 compact camera, bird feeders, shrubs for planting, and more.

To enter, email your entry to urbanbirds@cornell.edu. Links are acceptable for videos. Write “Funky Nests” in the subject line. Include your name and mailing address. Explain why you submitted your entry -- what's the story behind it?

Deadline for entries is July 31.