J. Mortimer Woodcock:
The Forester Who Led Ridgefield
While most people today would assume a nature center named Woodcock celebrates the native bird, they would be wrong. The facility is in fact named for J. Mortimer Woodcock, a soft-spoken, cigar-smoking first selectman whose unusual vision led to the creation of the Woodcock Nature Center on the Ridgefield-Wilton border. Both the center and a local road recall his four-year tenure. 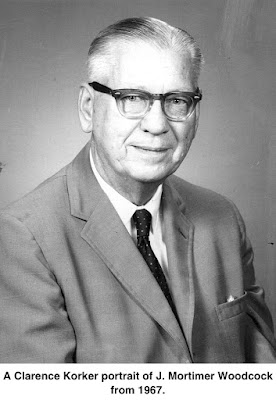 A forester by training and nurseryman by vocation, “Woody” Woodcock once led the huge Outpost Nurseries that provided the plantings for two World’s Fairs, and for many parks, estates and corporate headquarters in the Northeast. But he was better known as the town’s chief executive from 1967 to 1971, a period of unprecedented school construction resulting from record population growth.
Joseph Mortimer Woodcock was born on Bastille Day, July 14, 1904, in Fredonia, N.Y. In 1924, probably influenced by his years of childhood camping in Canada with the Boy Scouts, he enrolled in the College of Forestry at Syracuse University. He spent summers until graduation  as an instructor and guide at a lakeside camp for girls in the Canadian wilderness where, at night, he would often sleep in his canoe, letting it drift across the lake wherever the breeze took it.
In the early 1930s, Woodcock was a head forester with the Civilian Conservation Corps, the Depression-era service that undertook many public conservation and recreation projects.
In 1933, he came to Ridgefield to take a job with the Conley family’s Outpost Nurseries. Outpost, which claimed to be the world’s largest supplier to landscaping plants, covered nearly 2,000 acres of Ridgefield and Danbury, including most of the Limestone and much of the Farmingville Districts.
He soon became manager of Outpost and, in 1944, purchased the firm, which became Woodcock Nurseries. Early on he owned 10 acres and leased 1,000 acres for his stock.
Working for Outpost or running his own company, Woodcock was involved in landscaping portions of the 1939-40 and the 1964-65 World’s Fairs, both in New York; many fully grown trees were supplied to each. Outpost and Woodcock also did plantings for the National Art Gallery in Washington; parks along Riverside Drive and elsewhere in New York City; parts of the campuses of Harvard, Yale and Williams colleges; the grounds of Narragansett and Monmouth Raceways; and the estates of such notables as songwriter Cole Porter, explorer Lowell Thomas, columnist Walter Winchell, actor Robert Montgomery, the William F. Buckley family, New York Gov. Thomas E. Dewey, and President Franklin D. Roosevelt.
During World War II, he helped manage a special saw mill at Outpost that produced long, wooden keels for PT boats. The mill was located on Route 7 between Route 35 and Haviland Road, and employed many Jamaican workers brought up from the island because of labor shortages here. Woodcock also supervised the felling of huge trees at Roosevelt’s estate at Hyde Park; the trees were trucked to Ridgefield to be milled into keels.
After the war Woodcock became more interested in the community and its government. A 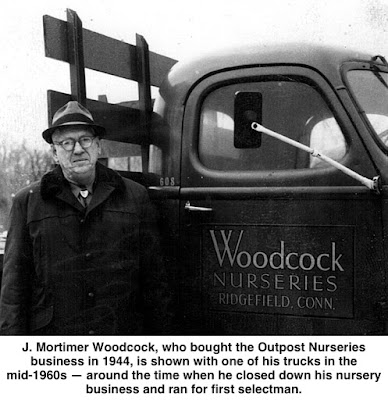 Republican, he was elected a member of the GOP Town Committee in the 1950s and eventually became its chairman. He also served on the Board of Finance, the Parks Commission, and on committees studying school sites and the possibility of using an incinerator instead of a town dump.

In 1967, when Leo F. Carroll announced he was retiring after 10 years as first selectman, Woodcock was nominated to run on the Republican ticket. He easily defeated Democrat Otto H. Jespersen and won re-election two years later.
It was a time of considerable stress as the local government struggled with the pressures of a population explosion in which Ridgefield grew from a sleepy town of 8,600 in 1960 to a bustling bedroom community of 18,000 in 1970. The town had just finished building East Ridge Junior High School (now the middle school), construction of Scotland School was nearing completion, Branchville School was underway, and the town still needed a bigger high school and yet another elementary school.
During the Woodcock administration, townspeople battled for a year over what to do about the burgeoning high school enrollment — either expand the old high school on East Ridge or build a new 1,800-student school on land the town bought a few years earlier on North Salem Road. In a 1968 referendum at which more than 3,000 people voted, the North Salem Road site won by a margin of a mere 63 votes.
Around the same time, the town voted without much fuss to build Barlow Mountain School.  (However, after another blistering battle in early 1970s, voters defeated a plan to build a seventh elementary school on West Mountain.)
Woodcock took such controversies in stride and never seemed rattled or upset — not even when the Planning and Zoning Commission threatened to arrest him. The zoners served him with a “cease and desist order” for storing highway department snow removal equipment at a town-owned barn in Ridgebury, charging it violated zoning regulations. If he didn’t comply, the order said, the commission would have him arrested.
“Let them arrest me!” he said with a laugh to a young reporter in his office as he lit one of his ever-present cigars. “Now wouldn’t that make a great story for your paper!”
In the end the commission backed off on its threat.
Woodcock was probably the last of the old-time first selectmen who seemed more a neighbor than an official. His office was on the first floor of the town hall, near the front door, and to make himself accessible, he often left his door to the hallway wide open so that anyone needing help could walk right in — no appointment or secretary needed.
He believed in customer service and satisfaction — the customer being the voter. In 1971 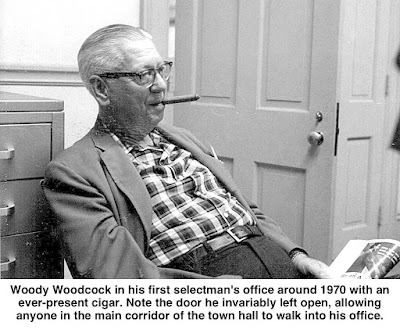 when a resident wrote complaining about some regulation at Martin Park, Woodcock replied in a letter that began diplomatically: “I am always glad to receive a letter questioning our town regulations. As a member of our town, you have every right to question town rules which affect you.”

He would often deal with complaints himself rather than pass them on. One afternoon after a big snowstorm, he got a call from an irate citizen, complaining that the town plow crew had moved his mailbox to the opposite side of the road. Woodcock didn’t think that was likely, and he drove to the scene to find out what had happened. It turned out that a young highway department driver, new to the job, could not see exactly where the pavement was and wound up   plowing a path across the complainant’s front lawn, thinking it was the road.
It was the “highway” that had moved, not the mailbox.
There were limits to how far he would go, however. One night at home, he received a call from a woman who demanded that he send someone to remove a dead cat from the roadside in front of her house. Woodcock said it would be rather expensive to call out a town crewman and pay him the union-required time-and-a-half for a minimum of four hours, and that the dead cat  would be removed first thing in the morning. The woman continued to demand immediate action, but finally slammed down the phone.
The next morning a road crewman could not find the cat. That night, as Woodcock was presiding over a Board of Finance meeting, in came the complaining woman, carrying  a cloth bag. She dropped the bag on the table in front of Woodcock.
“There’s your cat,” she said. She turned around and walked out.
During the Woodcock administration, the town made one of its most useful purchases: the 26-acre Holy Ghost Novitiate on Prospect Ridge. The main building became the school board headquarters for many years and is now the congregate housing for the elderly. The novitiate land is now used for town playing fields, for affordable housing, and for a dog park, and the outbuildings today house the Ridgefield Guild of Artists, the Ridgefield Theater Barn, and the Marine Corps League.
Perhaps Woodcock’s least expensive acquisition was the one for which he will be remembered longest. During his administration, the state was buying up large tracts of land for the Norwalk River Flood Control Project. One section contained more than 140 acres and a house on the Ridgefield-Wilton line. Despite the fact that all but a small portion of this property was in the town of Wilton, Woodcock arranged to have the Town of Ridgefield lease it at $1 a year from the state to establish a nature center. It was probably one of the few times in Connecticut history that one town leased parkland in another.
At his retirement dinner as first selectman in 1971, it was announced that the new operation had been named the Woodcock Nature Center in his honor.
In 1989, when he was 85, he paid his last visit to the then-thriving nature center and expressed pleasure at how well it was doing. “I only wish I was 40 years younger and could be helping you,” he said. “It makes me glad to see somebody interested in the same thing I was and doing something with it.”
Woodcock was also deeply involved in other aspects of the community. In 1942, he joined the recently created Ridgefield Rotary Club; he became its seventh president five years later. He was named Rotary Citizen of the Year in 1966.
Though he and his wife had no children, he was active in programs that helped young people. He was treasurer of the Ridgefield Boys’ Club, a director of the Branchville Fresh Air Association which brought city kids to Ridgefield in the summer, and served as a director of the Great Pond Holding Corporation, predecessor of Martin Park, providing Ridgefielders with their first public first beach.
He also served on the board of the Ridgefield Savings Bank, now Fairfield County Bank, and was a director of the First Congregational Church. He volunteered with the Keeler Tavern, Danbury Hospital and the Ridgefield Cemetery Association, and was active in local and regional Masonic organizations.
Three years after he retired from office, Marcelino Lavin subdivided some land off Barry Avenue and named the dead-end road serving it “Woodcock Lane” in honor of the former first selectman. It is one of only three roads in town named specifically for Ridgefield chief executives; the others are Tanton Hill Road, honoring Harvey Tanton — who himself voted to approve the name (Tanton also worked for Outpost Nurseries), and Hull Place, named for Harry E. Hull.
Woodcock and his wife, the former Anne Pomroy, lived for many years on Farmingville Road in a house that stood behind the Shell gas station (where  a car wash now operates). They later moved to Huckleberry Lane. He died in January 1993 at the age of 88 and she, seven months later. They had marked their 60th wedding anniversary in 1991.
Among the speakers at his 1971 retirement dinner was Connecticut Gov. Thomas Meskill. The governor helped present Woodcock with a clock, engraved, “To a grand guy who contributed unselfishly and faithfully so others may enjoy Ridgefield’s future.”
“I never watched a clock in my life, but now that I’m not going anyplace, I’ve got a beautiful one to watch,” he said.
When he visited the nature center in 1989, Woody Woodcock gave his last press interview. As he chatted, he was holding his legendary cigar, although both his doctor and Anne had long ago forbidden his smoking.


“I haven’t lit one in years,” he said with a big smile. “I just need something to play with.”