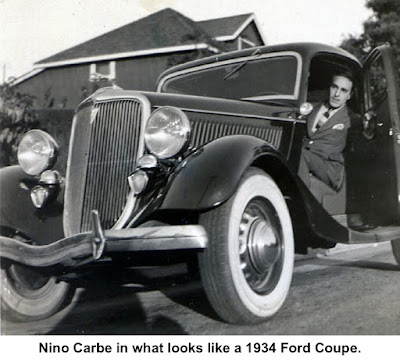 Nino Carbe:   Behind the Animations You probably haven’t heard of Nino Carbe, but if you were a kid any time from the 1940s through the 1980s, you have seen his work. Carbe drew backgrounds for many of the great animators — from Walt Disney and Walter Lantz to Hanna Barbera and Filmation — whose productions appeared both on the big screen and on television. Carbe, who lived in Ridgefield in the 1950s and early 60s, also illustrated many books, especially for children. A native of Sicily, Nino Carbe was born in 1909 and immigrated with his family when he was three. He was soon exhibiting talent at both art and classical violin, but excelled at the former. At the age of 16, he began studying art at the Cooper Union. By his early 20s Carbe was illustrating books for New York City publishers, including such classics as Tales of the Arabian Nights , Cyrano de Bergerac and Frankenstein . In 1936, he moved to California and was soon hired by Walt Disney for whom he drew backgrounds of such D
Post a Comment
Read more
November 03, 2020

John S. Smalley: An African-American  Who Fought — and Died — In the Union Army Few people today realize that a half dozen African Americans from Ridgefield served in the Civil War — even though, thanks to the 1850 Dred Scott Supreme Court decision, they weren’t even considered citizens of the United States. That’s probably because their stories have never been told. A remarkable example was John Smalley, who was too young to enlist on his own, and who became among the last Union soldiers to die in the service of his country. Born around 1846 on Ned’s Mountain in Ridgebury, John S. Smalley was only six years old when his father died. His mother passed away two years later, leaving him an orphan. He was probably cared for by his aunt, Betsy Watson, until he got older.  At some point Frederick Starr became John’s “guardian.”  Starr, who in 1860 was a 28-year-old butcher with a wife and two small children,  lived on Elm Street in Danbury. He later operated a grocery store in that city. S
Post a Comment
Read more
More posts