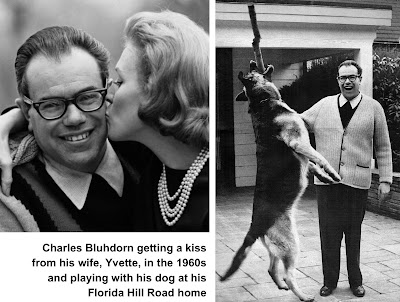 Charles Bluhdorn:
The 'Mad Austrian'
His death seemed like his life: face-paced and high-powered. Charles G. Bluhdorn, who began his career as a $15-a-week worker and became one of the world’s richest and most powerful men, died of a heart attack on a corporate jet in February 1983, returning from a Caribbean resort he created.
Born in Vienna in 1926, Bluhdorn as a boy was considered such a “hellion” that his father sent the 11-year-old to an English boarding school for disciplining.
At 16, he came to New York, studying at City College and Columbia and served in the U.S. Army Air Corps during World War II. In 1946, he went to work at the Cotton Exchange, earning $15 a week. Three years later, he formed a company that would make him a millionaire at 30.
In 1956, he acquired Michigan Bumper, a small auto parts company that eventually grew into Gulf and Western, a conglomerate that ranked 61st in the Fortune 500 by 1981 and owned  Paramount Pictures, Madison Square Garden, and Simon & Schuster publishing as well as the Bohack supermarket chain, companies that made guitars and survival equipment for astronauts, and jet engine parts. He was CEO and chairman of the board.
In 1965 he was on the cover of Time magazine as one of a handful of millionaires under 40; he was said to be worth $15 million ($114 million in today’s dollars).
Once called “Wall Street’s Mad Austrian,” he was a classic workaholic. “My wife thinks I’m nuts,” he told an interviewer. “But when you’re building something, you’re spinning a web and tend to become a prisoner in the web.”
While Bluhdorn was a high-powered, hard-driving executive, he was surprisingly informal. “Charlie makes a great impression at first,” an associate once said. “He dazzles you until you suddenly draw back. You wonder: Why is he acting this way? What is his game? Later you realize how natural and straightforward he really is. It can be a little scary. I mean you would expect the head of a huge corporation like Gulf and Western to be a little more, well, formal.”
A Life magazine profile by Chris Welles in 1967 offered this description of his work “style”: “Formality is the last thing anyone would accuse Charlie Bluhdorn of. His impatience throws his whole behavior out of whack. He never walks but runs, ﬂat-footed, slightly off-balance, as if he were racing down a railroad track on snowshoes, jotting down thoughts on scraps of paper as he goes. The last time he was talked into a golf game, he smashed his golf cart into a cement wall. He distrusts anything mechanical. Often in his oﬂice, surrounded by telephones, he becomes Hercules battling the Hydra, cursing wrong numbers, crossed lines, small delays, hopelessly entangled in wires. stabbing wildly at the buttons on the receivers. ‘Bluhdorn is like a race horse,’ says an associate. ‘Put him on the track and he runs a great race. But somebody has to lead him back to the stable, cover him with a blanket and give him some food.”
When he died, Bluhdorn’s corporate jet was flying from the Dominican Republic to New York. He had a special fondness for the Dominican Republic, and spent millions on the economic and social 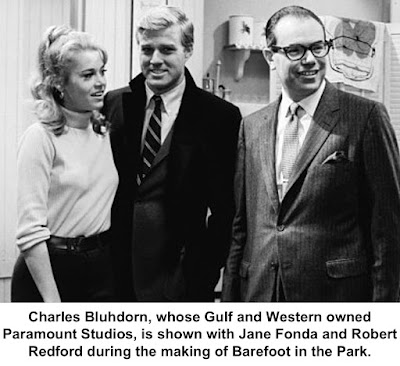 development of the island nation. Some called him the father of the Dominican tourism industry after he developed what became the world-famous Casa de Campo resort, which includes three internationally renowned golf courses designed by Pete Dye. Oscar de la Renta, a Dominican and a friend of Bluhdorn, designed the interior of Casa De Campo

Gulf and Western had some 300,000 acres of sugar plantation there, with a workforce of 19,000 people — it was the nation’s largest private employer, biggest landowner, and top taxpayer.
After he bought Paramount in 1966, Bluhdorn planned to develop moviemaking center on the island. Scenes from such films as Godfather Part II (1974), Sorcerer (1977) and Apocalypse Now (1979) were shot there.
In 1963, Bluhdorn and his wife, Yvette, bought a 28-acre estate on lower Florida Hill Road. Over his years here, he quietly contributed to the community; for instance, he bought the Ridgefield Police a boat and trailer for its scuba team. He was also a trustee of Texas Wesleyan College and the Trinity Episcopal Schools Corporation in New York,  and bought a 12-story building at 2 Columbus Circle in order to donate it to the city in 1980 as a cultural center.
Bluhdorn was also modest in his tastes for a home. While his estate on Florida Hill Road had a pool, tennis court, greenhouse, and other amenities, his house had only eight rooms. When designer Alexander Julian bought the spread in 1988, he and his wife built and lived in a new 6,000-square-foot house on the property.


Bluhdorn was only 56 when he died. Among those who attended the private funeral services at St. Mary’s Church was former Secretary of State Henry Kissinger.