Richard E. Venus:
Historian and Storyteller
Every era has its grand storyteller, and for the last third of the 20th Century, Ridgefield’s was surely Dick Venus, historian, postmaster, town official, dairyman, and raconteur extraordinaire. 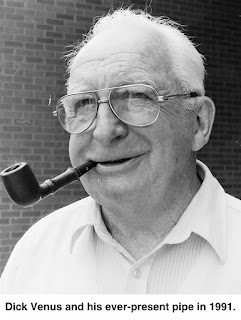 Venus came to epitomize the way Ridgefield was during most of its 300 years — a small town of mostly kind and gentle people who participated in all aspects of their community, who enjoyed their fellow townspeople, and who loved a good story and knew how to tell it.
Born in 1915 in a Main Street house still standing at the north edge of Casagmo, Richard Edward Venus was named for Father Richard E. Shortell, the longstanding and popular pastor of St. Mary Church.
He grew up listening to the many stories of adults, tales told in an era before radio or TV and tales he never forgot. He became a master storyteller, enchanting countless people with his recollections of the days when Ridgefield was dotted with the summer estates of wealthy New Yorkers and of the many fascinating people who worked as their servants, gardeners, and chauffeurs.
Many of those anecdotes are recorded in his monumental series, Dick’s Dispatch, 366 columns published in The Ridgefield Press between March 1982 and November 1988 (which have been collected, bound and indexed, and which are available at the Ridgefield Library).
As a boy, he had a large newspaper route to help with the family income. In 1928, only 13, he went to work on Conklin’s Dairy Farm before and after school, and later worked full time. “I always loved horses and drove a team, plowing fields and mowing hay,” he recalled.
When tractors took over from horses, he moved to the retail part of the milk business.
Later, he became superintendent for many years at Dr. Royal C. Van Etten’s 87-acre Hillscroft 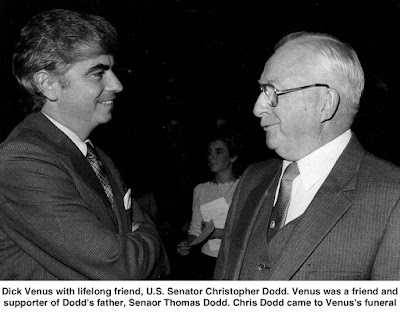 In the 1950s, he operated Dic-Rie Dairy (named for Dick and his wife, Marie), delivering milk to many households.
In 1961, President John F. Kennedy appointed him postmaster of Ridgefield, a job he held for 21 years, longer than any person before or since. He was also the last Ridgefield resident to serve as the local postmaster — every postmaster back to Joshua King in 1789 had lived in town, but none since 1982 has.
“In the post office Dick Venus was always a smiling, friendly fellow, ready to greet and talk to anybody who dropped by,” Press publisher Karl S. Nash once wrote. “He knew everybody in town and, better than that, where they lived. In fact, Dick made it a point of pride never to return a piece of mail as undeliverable just because the addressee had not reported a change of address. The problem 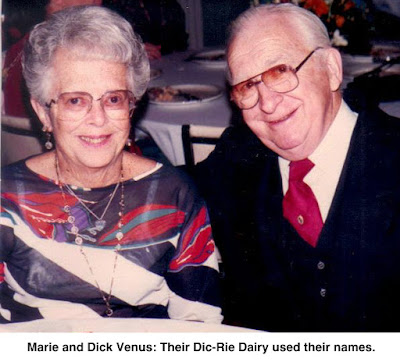 arose most frequently at Christmas time — some years Dick had 5,000 pieces of mail with expired addresses or insufficient ones. He took these home with him and worked on the problem there, and rarely got any thanks for his effort.”

A lifelong Democrat, Venus served three terms as a selectman and ran twice unsuccessfully for first selectman against the popular — and Republican — Leo F. Carroll. In one of those runs, he lost by only 208 votes. He was a longtime friend and supporter of U.S. Senator Thomas Dodd and later his son, Senator Christopher Dodd — Chris Dodd attended Venus’s funeral.
He served on the Historic District Commission, the Zoning Board of Appeals, and was a leader in or member of many community organizations, including Kiwanis and the Boys Club.
In the mid-1980s, the governor appointed Venus as Ridgefield’s first official town historian. He was active in the Ridgefield Archives Committee, later the Ridgefield Historical Society.
And if that wasn’t enough, Venus was a musician. Around the age of 10, he taught himself the harmonica and played it so well that he gave a concert at age 11 on WICC radio in Bridgeport. Starting in 1928, he was a drummer in the Ridgefield Boys Band and later was drummer for his own 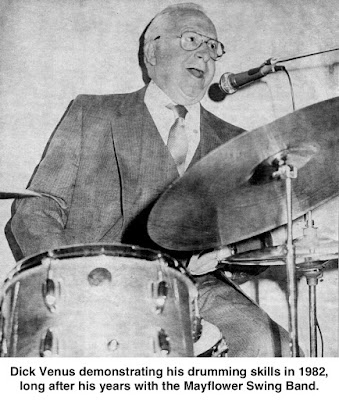 Mayflower Swing Band, organized in 1934, which played throughout the area.

A longtime member of the Knights of Columbus, Venus was a devout Catholic. In fact, his belief in his faith’s tenets led him decline to perform a celebrity wedding in his capacity of justice of the peace. It was 1941, and the notorious millionaire and socialite Tommy Manville wanted to marry his fifth wife — Venus turned him down because divorce violated Catholic doctrine. (Manville went on to amass 13 marriages to 11 women before his death in 1967 at the age of 73.)
In 2000, the town renamed the old Ridgefield High School the “Richard E. Venus Municipal Building.”  It was just one of many honors that also included Rotary Citizen of the Year in 1974.
He died in 2006 at the age of 91. A year later, a section of Route 35, West Lane, from the Cass Gilbert Fountain to Olmstead Lane — where he had lived — was named the Richard E. Venus Memorial Highway.
His wife, Marie Bishop Venus, former chair of the Democratic Town Committee, died in 2011 at the age of 92.
Dick Venus saw the town change a lot from his childhood, but he never stopped loving it and its people.
“It’s grown too fast,” he said in 2000. “We weren’t prepared for it ... There are a lot of nice people who have moved into Ridgefield, and there are others — it’ll take them a little time to get acclimated. My mother always taught me to tip my hat and smile at people. With some, if you do that, they’ll glare at you like you’re crazy, but they’ll get along. They’ll get the swing of things before they’re through. Most everybody who comes through Ridgefield stays, if they can. Ridgefield is a great town.”