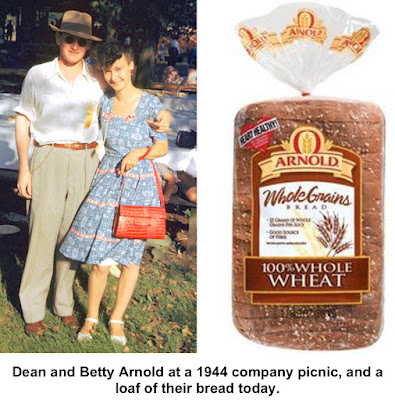 Dean Arnold:
The Baker Who Feared Flour
When Admiral Richard E. Byrd came to a Boy Scout fundraising event in Ridgefield in October of 1956, he was driven to the Community Center by Dean Arnold. The two were not only friends who shared an interest in supporting scouting, they had also worked together to develop a method of freezing bread to keep it fresh.
Byrd, of course, knew a lot about cold: He was the famous Arctic and Antarctic explorer.
And Dean knew a lot about bread: He founded Arnold Bakery.
Which seems unusual for a man who was allergic to flour.
Paul Dean Arnold was born in New York City in 1908. He grew up in Greenwich and New Rochelle, N.Y., and graduated from the School of Business at Columbia University in 1930.
The Arnold family was a New Rochelle neighbor of Frederick Beers, the head of the National Biscuit Company (Nabisco), who offered the recent graduate a job at the company’s bakery in Manhattan.
“Mr. Arnold liked baking, but his allergy soon left him sneezing, coughing and red-eyed,” said The New York Times. “Because he showed promise, the company put him in charge of its Portland, Maine, bakery in 1935, but his misery only continued there.”
Finally, his wife, Betty, wrote to Beers: “Dear Fred, If you can’t put Dean in a position where he won’t breath flour, kindly fire him. With best regards, Betty Arnold.”
In January of 1940, Beers did just that.
Within two months Arnold was starting his own business — and it still involved flour, but on a small scale that, he and his wife hoped, would not affect his allergy.
Arnold did not like the quality of the mass-made breads that were available, and he began experimenting with different recipes, using a brick oven with stone hearth that he set up in his garage in Stamford.
“Placing their trust in superior ingredients, like unbleached spring wheat flour, honey, butter and eggs, they developed the golden rich bread that would soon become a leading premium brand with an international reputation,” the company says today. They called their product Arnold's Brick Oven Bread.
Dean did the baking and Betty did the packaging (sealing the waxed wrappers with her flatiron). At first they sold the bread only to neighbors and a few local stores. However, it soon 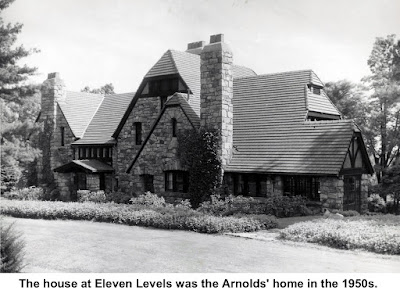 became so popular, Arnold had to hire bakers to meet the demand. He eventually set up a baking plant in nearby Port Chester, N.Y.

The company grew rapidly and, in 1964, Arnold built one of the largest baking plants in the world in Greenwich, able to produce 10,000 loaves of bread and 10,000 dozen rolls an hour.
When he began expanding into distant markets, including Europe and the Caribbean, he used Admiral Byrd as a consultant and, according to The Times, “pioneered the development of freezing bread for wider distribution.”
Arnold was also one of the first major employers in the United States to provide medical and dental insurance for his employees.
In 1952, the Arnolds bought the 180-acre Eleven Levels estate on West Mountain from Joseph and Nora Shapiro — Joseph (also profiled in Who Was Who) was another entrepreneur, the founder of the Simplicity Pattern Company.  Grosvenor Atterbury and John A. Tompkins designed the Eleven Levels house in 1907. Atterbury was a prominent Yale-educated architect who specialized in “weekend homes of the wealthy.”
In 1959, Arnold decided to return to his old home town of Greenwich, where he would soon build his giant bakery. He sold Eleven Levels to Jerry Tuccio, who lived in the house and subdivided much of the land.
The Arnolds were generous contributors to the Ridgefield community, including supporting Boy Scouts. “As well as making cash donations, they could be counted on to furnish their bakery products to many of the charitable affairs that were held,” said Town Historian Richard E. Venus in “Dick’s Dispatch.”
In Greenwich, Dean Arnold remained involved in Boy Scouting. He was also active in the Rotary Club, Urban League, Community Chest, and Red Cross.
When he retired and sold the business in 1970 to Schaefer Brewing, his original investment of $600 with himself as president and Betty as treasurer — the only employees — had grown to $80 million in annual sales ($500 million in 2016 dollars) and a workforce of 3,000 people. Arnold Foods Company is today owned by Bimbo Bakeries USA, the American branch of the multinational Mexican company that owns such other brands as Thomas’, Sara Lee, and Entenmann’s.


Paul Dean Arnold died in 1985 at the age of 76. Betty had died three years earlier.

A great bread that my father became a wholesaler for in 1950 and put all of us through school. Thanks Betty and Dean for taking a chance on a young couple from Westerly, RI.