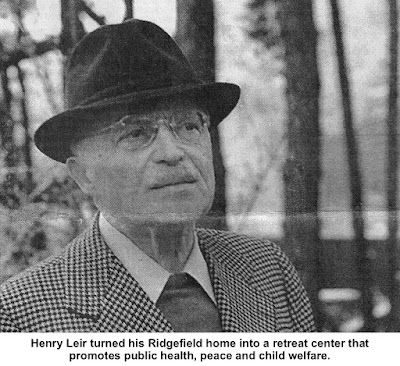 Henry Leir:
Visionary Philanthropist
A captain of industry whose writing was once likened to Jules Verne’s, Henry Leir is remembered today as a philanthropist who gave away millions in his lifetime and whose foundations still donate large sums to universities, hospitals and other organizations around the world. He and his wife established a retreat house at their Ridgefield estate that annually sponsors and hosts conferences on humanitarian, scientific and health-related subjects.
Born Heinrich Hans Leipziger in 1900 in Prussia, Leir was one of seven children. His father died when he was 11, forcing him to help support the family at an early age. When he was still a teenager, he began working for a German steel company and eventually rose to leadership positions in Magnesit, a German manufacturer of heat-resistant materials.
However, in 1933, as Hitler was becoming chancellor, he and his wife, Erna, fled Germany and settled in the tiny duchy of Luxembourg, where he established his first company. He was always grateful to Luxembourg because the primarily Catholic nation had welcomed the two Jewish refugees.  After world War II, he contributed millions to the rebuilding of the country and its economy.
While in Luxembourg, Leir wrote a utopian science fiction novel, “La Grande Compagnie de Colonisation,” which promoted world peace. The book described a global corporation that sponsored development, training and research to improve international economy and raise standards of living throughout the world. The novel envisioned many things that later became fact: the United Nations, the European Union, the defeat of Nazism, a tunnel under the English Channel, turning deserts into fields in undeveloped countries, and the growth of China, for instance. While the book sold few copies at the time, it was still being studied in the 1990s for its ideas.
The book was Leir’s only effort at writing. “I had my disappointment with this book and I did not write any more,” he said in a 1996 Ridgefield Press interview.
War was breaking out in Europe in 1938, and the Leirs decided to move to the the United States where he adopted the new name, Henry Leir, and founded Continental Ore Corporation. The company became a major international trader in ores, minerals, alloy, and carbon products, and had offices in Luxembourg, London, Paris, Tokyo, Mexico City and Dusseldorf.
In 1962, Leir completed a deal that was considered both visionary and huge: A $250-million ($2 billion in 2016 dollars) contract to sell pig iron to Japanese steel manufacturers. He had convinced the Japanese it was in their best interests to use their resources for finishing steel rather than producing pig iron. This would free up resources and eventually help launch the rapid expansion of the Japanese steel industry and fuel the production boom of Japanese goods, especially cars.
Also in 1962, Leir fought Union Carbide Corporation over its monopoly of the vanadium market in the United States. His antitrust suit resulted in an 8-0 decision by the U.S. Supreme Court in his favor. (Leir was represented before the court by Joseph Alioto, a lawyer who became mayor of San Francisco from 1968 to 1976, a period of considerable turmoil.)
Leir sold Continental Ore in 1966 for $40 million in stock ($300-million in 2016), but continued being active in the industry until his death, serving as chairman of S.A. des Minerals, the largest trading firm in Luxembourg — which he had founded more than 60 years earlier. At the age of 98, he would still work at his office in New York City.
In the 1930s, Leir had become close to the leadership of Luxembourg and when he moved to the States, he helped create close relations between the royal court of Luxembourg and Franklin Delano Roosevelt, whose mother, Sara Delano, traced her ancestry to Luxembourg. In the years after the war, Leir attracted several major American corporations to Luxembourg, including Wells Fargo, Bank of America, Goodyear, DuPont, and Monsanto.
After he sold Continental Ore, Leir focused much of his energy on philanthropy, especially on helping hospitals, universities and underprivileged children here and abroad.  To do this he and his wife set up three foundations — The Henry J. and Erna D. Leir Foundation, Inc. of Luxembourg, The Ridgefield Foundation, Inc. and The Leir Foundation, Inc.
“The wealth of the Leirs has been devoted primarily to those charitable purposes having the widest benefit to humankind,” says the New Jersey Institute of Technology, a major recipient of Leir grants. “Following their precedent, Leir chairs have been endowed at universities and hospitals in medical research. The chairs were created for humanitarian studies on relief of poverty, famine, conflict resolution, and international trade and development, along with a chair in foreign languages and cultures.”
They endowed chairs at the Fletcher School of Law and Diplomacy of Tufts University, New Jersey Institute of Technology, the Weizmann Institute in Israel and Hebrew University of Jerusalem as well as the Luxembourg program at Clark University in Worcester, Mass.
Two of the Leirs’ largest local grants were $500,000 to the Aldrich Contemporary Art Museum and $1-million to Ability Beyond, both in 1996 (he had visited Ability Beyond, then called Ability Beyond Disability, at the age of 96 and was impressed with the work it did for the disabled).
Around 1952 he and Erna bought a 33-acre estate on Branchville Road that he would later 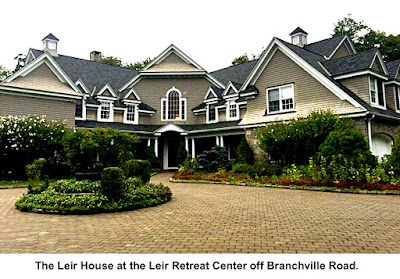 leave to one of the charitable foundations. Leir was 97 years old when he oversaw the planning and construction of Leir House at the estate, now formally called the Leir Retreat Center. The facility has sponsored or hosted conferences on such subjects as substance abuse, Lyme disease, human rights, assessment and treatment of suicide risk, human-animal interaction,  mental health, training of police detectives, dementia, child abuse, and geriatric orthopedics.

Over the years Henry Leir received many honors around the world. And despite being self-educated, he wound up with four honorary doctorates, including one from Tufts University.
Erna Leir died in 1996 and Henry, two years later at the age of 98.