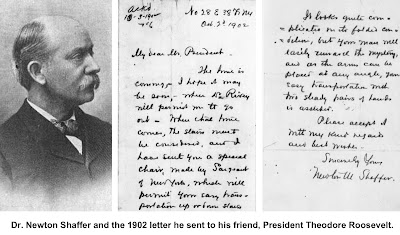 Dr. Newton Shaffer:
Helping the Crippled
On Sept. 2, 1902, President Theodore Roosevelt was visiting Pittsfield, Mass. While traveling through the town, his horse-drawn carriage was struck by a speeding trolley. Roosevelt’s carriage was thrown 40 feet and his Secret Service agent was “ground under the heavy machinery of the car into an unrecognizable mass” — the first Secret Service agent ever to die in the line of duty.
The president was hurled to the ground. The impact broke a bone in his leg and lead to an infection that took more than two months to heal. The injury occasionally flared up during the rest of his life.
The president’s condition that autumn worried Dr. Newton Shaffer, a longtime friend of the Roosevelt family. Shaffer was also one of the country’s first orthopedic surgeons and probably the top man in the field in the late 19th Century.
On Oct. 2, he wrote Roosevelt at the White House:
My dear Mr. President
The time is coming — I hope it may be soon — when [Surgeon General] Dr. [Presley Marion] Rixey will permit you to go out.
When that time comes, the stairs must be considered, and I have sent you a special chair, made by Sargeant of New York, which will permit you easy transportation up and down stairs.
It looks quite complicated in its folded condition, but your man will easily unravel the mystery, and as the arms can be placed at any angle, your easy transportation with two steady pairs of hands is assured.
Please accept it with my kind regards and best wishes.”
The president was grateful for the gift, especially from Dr. Shaffer. After all, the president’s father had championed Shaffer 30 years earlier as a pioneer in the field of orthopedic surgery and the president had recently backed the creation of Shaffer’s innovative hospital for crippled children.
The son of a minister, Newton Melman Shaffer was born in Kinderhook, N.Y., in 1846, grew up in the Hudson River Valley and received his medical degree from New York University in 1867. He began his career at the Hospital for the Ruptured and Crippled and started specializing in orthopedic surgery.
His work there caught the attention of Theodore Roosevelt Sr., father of the future president and a prominent businessman and philanthropist. Known as “Thee,” he had been a founder of the  Orthopaedic Dispensary and Hospital (now part of Columbia University Medical Center). In 1871 he convinced Shaffer to become a surgeon at the hospital and then take over management of it.
A few years later, Roosevelt Sr. persuaded Shaffer to also serve as the first orthopedic surgeon at St. Luke’s Hospital in New York City. There, he “attained worldwide eminence as a leader in that 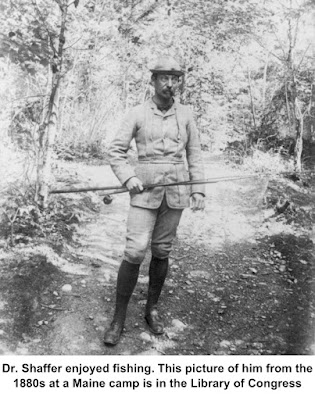 In the 1880s and 90s, he was also professor of orthopedic surgery at NYU and then joined Cornell Medical School. He was instrumental in founding the American Orthopaedic Association.
Shaffer’s specialty was children, particularly those whose bones had been ravaged by the effects of tuberculosis. “He long contended and has practically demonstrated that many of the cutting operations commonly performed for the relief of the deformed are unnecessary,” Johnson said.
In 1898, Shaffer had delivered a widely publicized paper on “The Care of Crippled and Deformed Children” in which he described “the large number of these unfortunates who were being only half cared for by the existing medical institutions” of the State of New York, the New England Journal of Medicine reported.
Two years later, with support from the state, Shaffer founded the New York State Hospital for Crippled and Deformed Children, refashioning an estate overlooking the Hudson River. The bill providing funding for the hospital was signed by New York Governor Theodore Roosevelt.
The institution has become today’s Helen Hayes Hospital, the nation’s first free-standing, state-operated hospital dedicated to the treatment of people with physical disabilities. Occupying a 105-acre campus in West Haverstraw, the 155-bed hospital was renamed in 1974 to honor actress Helen Hayes, who spent 49 years on its board of directors and was “a tireless advocate” for the facility.
Around the turn of the 20th Century, Shaffer decided to build a country place in Ridgefield off 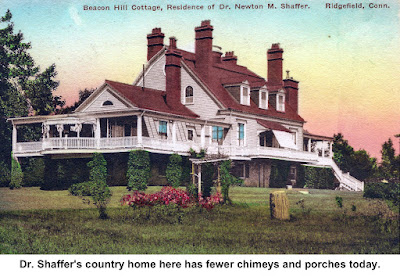 the east side of Wilton Road West, a ridge where the British encamped after the Battle of Ridgefield in 1777. The farmland overlooked Long Island Sound where British ships awaited the troops. Fires from the ridge signaled the ships that the soldiers would arrive in Norwalk the next day. Shaffer knew this and called his estate “Beacon Hill Cottage.” The house still stands today, but some of the features including expansive porches and five of the six chimneys were removed by later owners. Much of the estate land is now part of the Soundview Road development.


Over his career, Shaffer also invented many instruments and mechanical devices for use in orthopedic surgery. He continued to oversee his children’s hospital, do research, and write books and papers until his death in 1928 at the age of 82.