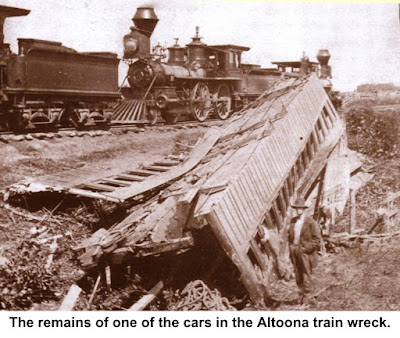 Lewis June:
Circus’s Advance Brigade
Early in the morning of Aug. 29, 1877, during a powerful thunderstorm, a Chicago, Rock Island and Pacific railroad train was rolling along the tracks near Altoona, Iowa, on its way to Des Moines. The train pulled a mail car, three passenger cars, and a sleeper as well as a brand new Barnum and Bailey advertising car, used to promote the coming appearances of the circus.
Aboard that car was Lewis June of Ridgefield, a circus executive, along with other circus employees.
As the train approached the swollen Four Mile Creek at around 30 mph, the engineer had no idea that the raging waters had washed out the bridge. The rails were still intact, but the stone trestle beneath them had collapsed.
The engine and all the cars, except the sleeper, plunged 20 feet down into the stream, whose channel was 20 feet deep. Eighteen people were killed, including seven aboard the Barnum and Bailey car, and an escapee from a mental asylum — the worst railway accident in central Iowa history.
It was a wild night for a man who had spent his life in wild world of circuses.
Like many other survivors, June helped rescue the injured and trapped. A New York Times account of the wreck described the scene:
“A horrific rain was falling in torrents, accompanied by wind, lightning, and thunder. The crash put out the lights, and the scene of terror which ensued may be imagined.
“The men who were not injured, and could get out, went to work at once to rescue the living and wounded. They had to go a mile to a farm house to get axes to chop them out, but they worked heroically, and by daylight had most of the wounded rescued.
“There were many pitiful scenes and tender incidents. One mother was killed while sitting between two children, who escaped unhurt. One little girl, who had lain in the water for four hours with a heavy man lying dead beneath her body, was discovered to be breathing, and was rescued and restored, and now shows no signs of injury.”
Oddly enough, June had supported the idea of using a special train car to promote the impending arrival of the circus, and this was the first car Barnum and Bailey had commissioned. Circus promotion was, in fact, June’s specialty during his four-decade career.
Lewis B. June was born in 1824 in North Salem, N.Y. He entered the circus world in his early 20s, serving as a cage driver for VanAmburgh’s circus. By 1851, he had become a partner with Ridgefield native Aaron Turner in the June and Turner Circus. An advertising promotion for that circus, no doubt penned by June, read: “Newly Equipped and Greatly Enlarged for the Traveling Campaign of 1851. Upwards of 80 Men and Horses Are Employed. This Monster Establishment Presents a Rare Opportunity for Wholesale Amusement and Character. A Few Hours Thus Innocently Spent Inevitably Serves to Resuscitate the Unbiased Mind from the Cares and Anxieties of a Business Life.”
“And that,” said circus historian George S. Cole, “was before circus press agents.”
In the following years he became a part owner of Franconi’s Hippodrome in New York City, the Big Bonanza, and various other circuses until 1876 when he joined Barnum and Bailey. For a while in the 1870s, that circus was officially known as “P. T. Barnum's Greatest Show On Earth; P. T. Barnum, John J. Nathans, George F. Bailey and Lewis June, proprietors.”
With all of these circuses, his specialty was promotion and he was always in charge of the “advance brigade,” as one circus historian put it.
June married a member of the Scott family of the Scotland District in town, and soon moved 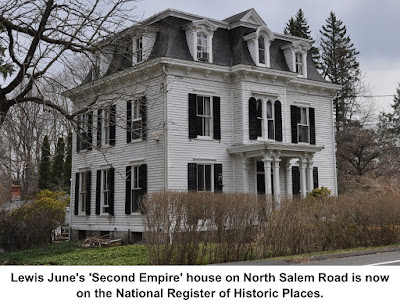 his home there. His first house burned down and in 1865 he built a handsome Victorian that still stands today and is on the National Register of Historic Places. It is one of the few “Second Empire” style homes in town.

“Circus horses were wintered in the large barns on the June farm on North Salem Road as well as the farm next door,” reports historian Silvio A. Bedini. “Local legend reports that a bear and giraffes were also quartered here at various times.”
By the mid-1880s, June was retired and living off his investments. An article on former leaders of the circus world that appeared in The Providence (R.I.) Sunday Telegraph in 1885 says June “takes it easy at Ridgefield, Conn., with nothing else to do but cut the coupons off his bonds and he has to have the shears sharpened pretty often, too, at that.”


He died in 1888 at the age of 63 and is buried in the June Cemetery on June Road in North Salem.