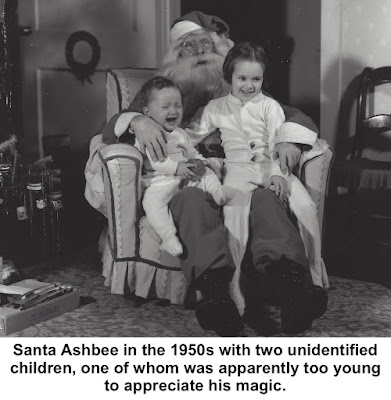 Charles Ashbee:
Ridgefield’s Santa
When Charley Ashbee died in 1962, the front page of the May 31 Ridgefield Press announced:

C.F. Ashbee,
Santa Claus,
Dies at 89
By then Ashbee, a retired insurance executive, had become a local legend.
“Mr. Ashbee spent nearly as much of his long life portraying Santa Claus and delighting the children of this town as he devoted to the insurance business,” the newspaper said in his obituary. “Donning a Santa Claus suit became a habit with Uncle Charley soon after he and Mrs. Ashbee settled here.”
Charles Francis Ashbee had been born in New York City in 1872, and moved to Wilton Road West around 1929. Soon after, he began his Santa services when he pinch-hit for someone who was unable to play the part at a church school party.
He took on other appearances and by the early 1930s had already become a fixture at Christmas celebrations on Main Street and with various organizations.
In the 1940s, Ridgefield Savings Bank (now Fairfield County Bank) had Charley visit each year. He also paid an annual outdoor visit to Ridgefield Hardware, thanks to owner, Ed Rabin. He often arrived in a sleigh driven by Bill Patton, whose farm was on Old South Salem Road. (In 1945, Ashbee kept his feet warm with a pair of German paratrooper boots, brought back from the just-ended war by Ed Rabin’s brother, Sidney.)
Over the more than 30 years he played the role, Ashbee wore out three Santa suits and three sets of wigs and whiskers.
“Charley got to be such an important part of the Christmas season that letters addressed to the man at the North Pole were rerouted to him,” reported Dick Venus, former postmaster who was also the first town historian. “He would never fail to visit the home of the little kid that wrote the letter.” 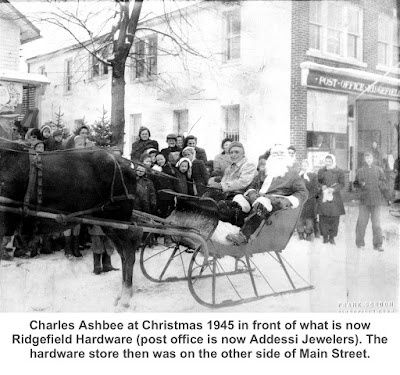 Venus added that, “in many cases, he was able to locate a toy that a youngster had asked for. When he did, he would take it along with him and leave it with the parents, to be put under the tree. Not only the kids, but grownups as well, thought that he was just the greatest.”
Among Ashbee’s off-season hobbies was autograph collecting, and he had the signatures of every president except George Washington. He also collected signatures of Civil War generals, and had all but J.E.B. Stuart and Stonewall Jackson.
For all the joy he gave children, Ashbee was named Rotary Citizen of the Year in 1960.
A year later, when he was about 88, Ashbee missed his first Christmas as Santa in three decades. He was seriously ill and confined to the Altnacraig nursing home on High Ridge. Scores of the town’s children went to the nursing home to visit him that Christmas season; some knew he was the person who had played Santa in the past while to others, he was just a nice man who needed cheering up.
He died in the spring.
Everett Lounsbury Jr., who developed Ashbee Lane off Route 7 in the 1960s, named the road the year after Charley Ashbee died. Lounsbury was undoubtedly a Santa fan, one of thousands in Ridgefield — like a young Rob Kinnaird who a couple of years ago recalled, “Mr. Ashbee was the Santa at the bank and at St. Stephen’s Christmas Party. The year he died, that Christmas, [St. Stephen’s Rector Aaron] Manderbach announced that Santa couldn’t make it that year, and there was no Santa at the bank.
“We were all okay with it, because Mr. Ashbee was Santa. It didn't seem right to have anyone else.
“I remember the year after, the bank got someone else but, by then, it made no difference to us, because we knew who the real Santa Claus was.”