Jim Lowe:
The Green Door
Ridgefield once had a Green Doors motel. It also had the man who sang the number-one hit song, “The Green Door.”
That, however, was the only connection between the motel and the song.
Jim Lowe, who sang the “The Green Door,” and was a longtime New York City disk jockey, died Monday, Dec. 12, 2016, at his home in East Hampton, N.Y. He was 93 years old.
A radio personality for more than a half century, Lowe had lived at Twin Ridge in the 1970s 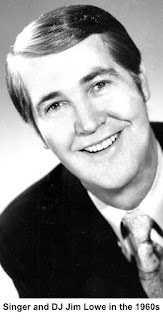 while he was an afternoon disc jockey on WNBC in New York.

Though he sang “The Green Door,” which became a number-one hit in 1956, he admitted in a 1971 Ridgefield Press interview, "I knew I couldn't really sing." So after his brief but successful flirtation with recording, he returned to being a disc jockey, a career he'd begun in 1948 when he graduated from the University of Missouri.
Over the years Lowe worked as a DJ on such radio stations as WCBS, WNBC and, for more than 20 years, on WNEW. Probably his most popular show was “Jim Lowe and Friends,” which lasted until 2004, although he spent many years in the 1960s hosting the popular overnight program, “Milkman’s Matinee,” on WNEW.
Nicknamed “Mr. Broadway,” he was considered an expert on American popular music of the 20th century, especially the 1940s and 50s.
He was also a composer and wrote  “The Gambler's Guitar,” a 1955 hit sung by Rusty Draper, and “Close the Doors They're Coming in the Windows,” a million-seller country hit.
He appeared in many commercials during the 1970s and 80s.
A native of Springfield, Mo., Lowe was born on May 7, 1923, the son of a surgeon. He served in the U.S. Army during World War II.