The Ruby-throated Hummingbirds are back and, from our own experience at least, there are plenty of them.

For years, Sally and I have had hummingbird feeders of various kinds, and always got a modest showing of Ruby-throats. Last year, because of some modifications to our house, we did not have our usual feeding station. 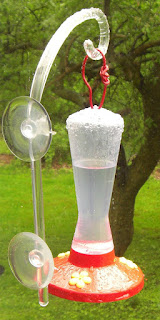 This year, we decided to try something new: Feeders hanging from windows, one in the kitchen (where we’ve never had one before) and one in the bedroom (which had been our traditional location).

While thumbing through a Kinsman Garden Company catalogue last winter, I noticed “super suction hangers.” “Bring your hummingbird feeders right up to your window glass and enjoy a super close-up view, with this high quality suction hanger,” Kinsman said.

Our previous feeders were hung from steel swing arms mounted solidly to the house. The catalogue said the suction hangers could safely handle feeders (or small plants) up to three pounds. They were only $6.95 so I ordered two.

I wanted some equally affordable feeders, and checked the master maker of hummingbird feeders: Perky-Pet (an odd name for a company specializing in wild bird feeders). There, among more than 50 (!) hummingbird feeders, I found Model 211, a plastic unit holding eight ounces and costing a mere $6.99. (Model 201 costs only $5.99, but it holds 18 ounces, which, in our territory is too much – more on that below).

So in April, I hung both feeders, one on a kitchen window 10 feet from the ground – it’s raised and lowered with a line – and one on the bedroom bay window, which can be reached by a crank-open side window. We waited a couple weeks, sighting only a couple of male hummers stopping on their way north. Then suddenly last week, the females arrived. 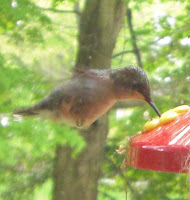 Now from before dawn till dusk, we have hummingbirds visiting both feeders. Often two show up at once and one winds up chasing the other away – typical territorial behavior. Having two feeders at different sides of the house may allow two females to set up nearby nesting territories and each to have the convenient food source.

The window mounts let us to observe all this activity as close as a foot or two away. The small expense – about $30 for two feeders and mounts – is well worth the entertainment these birds provide.

Don’t waste your money on special hummingbird mixes or nectars. Many commercial products use red dye – mostly as a sales gimmick. A red feeder, often with yellow around its openings, is all that is needed to attract hummingbirds; red fluid is unnecessary.

To make your own effective, inexpensive nectar, mix a quarter cup of white sugar with a cup of water. (Do not use brown sugar, honey or other sweeteners.)

Some people recommend boiling the water from public supplies to reduce the amount of chlorine – not a problem if you’re on a well.

Change the nectar every few days; in hot weather, even sooner. Potentially harmful bacteria can grow in the solution if left to “ferment” in the sun.

In the East, where there is only one species of hummingbird, feeders holding a small volume of nectar are more practical than big ones. Two or three hummers won’t consume 18 ounces in three or four days, the safe life of the nectar. They probably can’t even handle eight ounces. Out West, where there are many species that are probably not fighting each other for territories, feeders can serve many birds at a time and tend to empty more quickly.

Perky-Pet has a little three-ounce feeder that I will also try. Model 215P costs only $5.99 and is designed to be hung in planters.

Bird Watcher’s Digest has an excellent online guide to hummingbirds, including an extensive collection of “frequently asked questions.” Visit birdwatchersdigest.com, look for “Backyard birds” on the green menu bar, and select “hummingbirds.”

For folks with White Ash trees, early May can be a nail-biting time as they wait and wait for the leaves to appear. 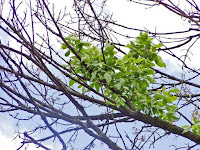 Ashes are one of the last native trees to leaf out in the spring. Many are still not out yet.

But ash owners aware of the “ash yellows” are particularly anxious to see leaves in the hopes that this deadly disease has not struck their tree. The result could be a hulk costing many hundreds of dollars to remove.

Ash yellows is a protoplasma, a kind of parasitic bacteria possibly transmitted by beetles, that attacks ashes and can kill them as in as quickly as one year – an amazing feat, considering White Ash may be anywhere from 50 to 100 feet tall, with up to a five foot diameter trunk.

One sign of a diseased tree are “witches’ brooms,” spindly clusters of leaves amid limbs that are otherwise leafless (see picture)

No one knows for sure how it spreads or exactly how it works, and no one has a way of preventing ashes from catching it.

But by now, if your ash has avoided infection, at least leaf buds should be appearing. If not, better plan on calling a tree crew.

Save the wood, though – ash is great in the fireplace.