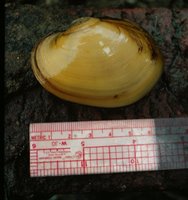 Last July, two naturalists canoeing on the Connecticut River found the first Yellow Lampmussel identified in the state since 1961. Once common and widespread, this mollusk was a source of food, currency, and jewelry for the American Indians. Colonists ate the meat and made buttons from the shells, whose interiors are lined with mother of pearl.

In nature, lampmussels help filter the water of both good and bad substances. They are also food for River Otters and other small mammals, as well as fish.

The Yellow Lampmussel succumbed to the activities of man, particularly polluting, damming, and dredging. The fact that they are being rediscovered here and in neighboring states, says the Connecticut Department of Environmental Protection, is a sign that the health of at least some rivers is improving.

We can do our own part in creating healthy waterways by eliminating – or at least carefully using – pesticides, fertilizers and other chemicals on our yards. Remember, say environmental officials, “what you put on the land will eventually end up in our rivers.”

Beauty in the beast

Each fall, the Turkey Vultures return. Often roosting in roadside evergreens, they may be drawn there by area's wealth of carcasses of deer, squirrel, possum, and other creatures fallen victim to the car. 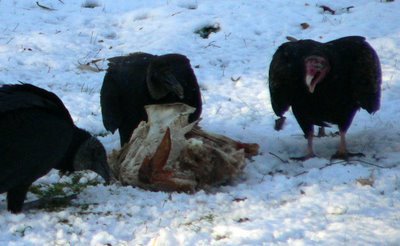 Some also get a seasonal treat. At least one family places the family turkey, picked clean after Thanksgiving dinner, in the back yard each year. Like clockwork, the vultures appear to pick it even cleaner.

In the air, few birds can match the vulture’s beauty. They glide for miles on outstretched, six-foot wings that rarely flap – soaring, angling, dipping, and rocking, all as effortlessly as a goldfish in a pool. Sliding over the treetops as they approach their roost, they are like so many 747s arriving at an airport.

Close-up and on the ground, however, the vulture looks like a character from a horror movie. With the black body of a fat undertaker, the huge bird bears a featherless, big-beaked, red-fleshed head – all the better to dip into the corpses with.

Sometimes beauty is not only in the eye, but in the distance of the beholder.

Interested in riding around in the middle of the night, emitting strange sounds in the woods and fields? If so, Connecticut wants you. 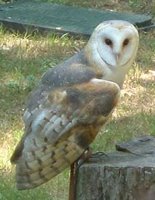 Concerned about the future of owls in the state, the Department of Environmental Protection has begun surveys to get a sense of their numbers, distribution, habitat, and habits in general. The problem with owls, of course, is that they are mostly nocturnal and are hard to see, so relatively little is known about them.

Volunteer surveyors hit the road at midnight with special sound equipment that broadcasts the calls of Barred, Northern Saw-Whet, Great Horned, Eastern Screech, and Barn Owls. They play the calls and hope for responses. This year, teams traversed 13 routes with 130 survey points, and got responses at 30 locations.

They found more than 30 birds – but no Barn Owls like the one above. Perhaps like the buildings they are named for, Barn Owls are disappearing, too.

As we rake, sweep and blow away the final leaves of autumn, we might wonder why they’re there – on the ground, that is, and not in the trees.

One reason was made clear here in 1987 when, on Oct. 4, a mere three inches of snow fell on leaves that were still healthy and green. The weight of snow-laded leaves felled countless limbs and trees, and knocked out power as long as four days. Broad leaves and snow just don’t mix on most large plants.

So as snow season approaches, trees shed their leaves, a process called abscission. In the fall the tree produces an “abscission layer,” a waxy substance at the base of each leaf stem. This substance, called suberin, first cuts off food and water to the leaves, resulting in the color changes.

Then, suberin’s added weight helps sever the leaves, freeing the tree of the burden and giving us our annual November exercise.