At this time of year, winter-haters can find a little solace in the fact that the days are getting longer.

For many, the lack of sunlight brings on seasonal affective disorder, whose signs include depression, irritability, overeating, and lethargy. It shows that despite the lofty place to which homo sapiens has risen among the animals, we are still creatures of nature and subject to her powers.

In fact, seasonal affective disorder may be a sign that nature really wants us to be more like bears. We should just fatten up and find a nice warm cave for the winter.

Some people have found a substitute. It’s called Florida.

The Lord of Misrule

Christmas celebrations are not always sacred and solemn, as we well know, but one of the oddest practices was once commonplace in old England where the Lord of Misrule reigned at this time of year.

Cities, towns, and universities across the country appointed these public officials for the 12 days of Christmas. “His duties,” said a 19th Century historian, “were to lead and direct the multifarious revels of the season.” It was no trifling job, either; the Lord of Misrule of London in 1635 spent 2,000 pounds – nearly $500,000 today – on public merriment.

One of the lord’s first official acts each year was to absolve all people of their wisdom, but to demand that they be just wise enough to make fools of themselves. He then set about encouraging “reveling, epicurisme, wantonesse, idlenesse, dancing, drinking, stage-plaies, masques, and carnall pompe and jollity,” according to one contemporary critic.

In an era with no shortage of misrulers in the world, it’s a wonder the ancient office hasn’t been resurrected.

We deck the halls with boughs of it, we name Christmas-born girls after it, and – if we're like Burl Ives – we even get jolly over it. But why do we love holly at Christmastide?

Decorating with green boughs, wreaths, and garlands was a practice of Saturnalia, a holiday season of the ancient Romans that fell around this time of year. The custom was picked up by early Christians in their efforts to woo pagans to their new religion. They made greens a Christian symbol, pointing out that Christ made his triumphal entry into Jerusalem over paths strewn with palms. 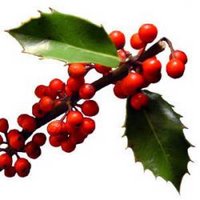 However, holly may be more practical than symbolic. Evergreens are an attractive ornament. They are available in the cold of winter and last long after picking. The holly, with its shiny leaves and red berries, is particularly decorative.

While its name may seem associated with holy, holly comes from the Old English word for pricker or arrow. And some of holly customs have a sharp side. As they festooned their parlors centuries ago, English families would chant appropriate – if not elegant – carols. As the holly went up, their voices rang out a song that included:

Whosoever against the holly do cry
In a rope shall be hung full high.
Allelujah!

So watch what you cry, and, in the tradition of Mr. Ives, have a holly, jolly holiday – be it Christmas, Hanukah, or Kwanzaa.

It’s tough being a commuter, traveling winding back roads and crowded expressways at dawn and dusk. Visibility is often poor as headlights shine in your eyes and perhaps rain, snow or fog blur your vision. Through all this, you must constantly keep alert for deer, which seem suicidally bent on throwing their 200-pound bodies at you. 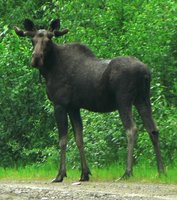 In September, a car struck and killed a 700-pound bull moose at Barkhamstead in upstate Connecticut. A month early, a crash killed a 500-pound moose in Goshen. These weren’t even “big” ones – moose can reach 1,100 pounds.

Connecticut wildlife experts estimate more than 100 moose are now in the state and their numbers are growing as their range extends southward toward metropolitan New York City.

What’s a motorist to do? The best advice is: Slow down! Be it deer or moose, or maybe even a 400-pound bear, the slower you’re going, the less the impact. You may even be able to avoid an impact altogether.

“Don’t let it lie in great sticks,” the Old Farmer’s Almanac urged its readers for December 1864. The season of sawing and splitting was here.

For the local farmers, early December was the time to work on wood, not for the winter ahead, but for the next summer and beyond. Wood for stoves and fireplaces needed drying, for sap-filled “green” wood cuts heat output by a third. Split up, firewood dries quickly and, as the almanac exhorted, it was best left outside a while in the late-fall weather. “Give it the wind a few weeks before housing, and it will dry all right,” the “old farmer” wrote.

Today, many people still heat with wood, using sophisticated stoves that burn logs and even conveyor-fed wood pellets, or employing high-tech furnaces that can burn both wood and propane or fuel oil.

But the old farmer’s old advice on firewood still holds true: Dry it right to burn it well.