Showing posts from December, 2005
Show all

December 27, 2005
T he Wall Street Journal reported a couple of years ago that Americans spend $2.6 billion on birdseed, two and a half times as much as they spend on food for needy nations. While it’s amazing that we spend so much on wild birds, it’s astounding that we spend so much less on fellow human beings in need. In a way, the disparity is understandable. The birds are right here, fascinating and cute. The world’s poor are distant, unknown and unpleasant. The fact is, however, birds don’t even need our help, but the poor do. Many agencies aid the world’s needy, both by providing food and by teaching people skills they need to feed themselves. CARE, Catholic Relief Services, AmeriCares, Lutheran World Relief, and Save the Children are just a few. To help others, they need our help. As we enter a new year, let’s vow to straighten out our priorities. Feed the birds, if you wish, but for every dollar you spend on birdseed, spend five or ten more on people in need.
Post a Comment
Read more 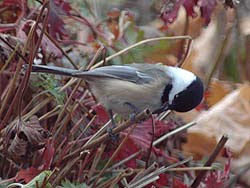 B ankers should love the little creatures of the cold. Be they birds in the air, squirrels in the trees, or mice on the ground, they believe in saving, although they do it with cache, not cash. Most of our year-round birds and many of our small mammals long ago learned to save – not for rainy days, but cold and snowy ones. While many large animals like bears store winter nutrition in their fat, birds and rodents are too small to carry enough fat to get through winter. So they cache food, stuffing it in the nooks of nature so they will have something to eat at harsh times like these. Some tight-beaked birds, like chickadees, watch over their accounts like bank auditors. They patrol the seeds they have stashed in bark, rock fissures or even under roof shingles. If any are missing, they are soon replaced. If you think that's easy, consider the chickadees in frigid northern Canada who each stash tens of thousands of seeds over several acres. Could Deloitte and Touche's best b
Post a Comment
Read more

A t this time of year a century ago, newspapers were full of references to Xmas. Editors were not being disrespectful of the holiday or its origins, however. Xmas is, in fact, a word more than 500 years old, invented and widely used by Christians, including parish priests and monastery monks. For many centuries, X has been an abbreviation for Christ. X is the English representation of the Greek letter, x , the first letter in the Greek word for Christ. While the letter is pronounced “ chi, ” it is used for the sound, “ ch ,” as in “Bach.” (Thus, technically speaking, Xmas could be pronounced “ kmas. ”) But in the 1950s, someone decided that Xmas was just some Macy or Gimbel effort to take Christ out of Christmas. Despite centuries of its use by devout clerics, a movement developed that declared Xmas a secular plot, promoted by greedy stores and lazy – or worse, atheistic – newspaper writers. Abbreviations are symbols for written words, just as written words are symbols for sounds. X
Post a Comment
Read more

December 20, 2005
F or local farmers of a century or two ago, mid-December was a time for butchering, a multifaceted event that led to many life-sustaining products. Hogs and cattle produced various cuts of meat, much of it salted and preserved over the winter in cold cellars. Scraps were mixed with salt and pepper, and ground into long-lasting sausages. Fat was boiled or “tried” for use as kitchen lard, as a main ingredient in soap, or to make tallow candles. Marrow made puddings. Hides were hauled off to the local tannery to become leather, which in turn became shoes, boots, harnesses, saddles, and other products. Even the bones were saved and ground to enrich soil. The whole process often lasted several days and involved family and friends. The work was hard, even dangerous. Old records often tell of people being maimed by the animals they were slaughtering. In fact, in Ridgefield in 1858, meat market owner David Hurlbutt died after being gored in the head by the horn of a cow he was trying to bu
Post a Comment
Read more 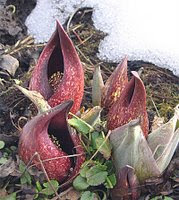 I n December, Thoreau used to go hunting for hopeful signs of spring. A bit early, you say? Not when the quest was for skunk cabbage. Just as winter is beginning, this wildflower is sending up its odd-looking and foul-smelling buds through ground that may already be frozen. It can do this because the club-like spadix, which bears its flowers, has the ability to produce heat, a process called “thermogenesis.” The spadix is protected by a cloak-like spathe, which keeps out the cold air and keeps in the warmth. Even when the outside temperature is freezing, the spadix can heat itself to more than 70 degrees. In early March when snow is still on the ground and spring is still weeks away, skunk cabbage is already ready to bloom, and its hot pocket will welcome bees, flies and other early insects to a tiny, tropical microclimate.
Post a Comment
Read more
More posts