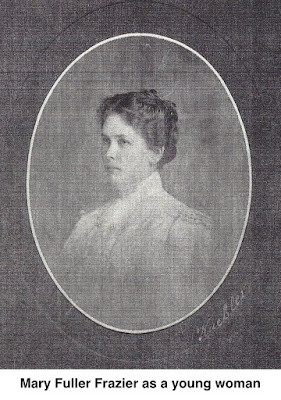 Mary Fuller Frazier:
The Heroine of Perrypolis
One of the more peculiar — and at the same time, one of nicer — people to have lived in Ridgefield was Mary Fuller Frazier.  The eccentric heiress arrived in town in 1946 at the age of 81, lived in a small portion of a large house, and then departed for a sanatorium and her death.
While here, however, she made out a will that gave $1.5 million — $15 million in today’s money — to a small, impoverished town in southwestern Pennsylvania where she was born, but which she’d visited only once in 60 years.
And despite being contested by greedy relatives with a champertous lawyer, her bequests helped provide her home town with schools, a library and even street lights.
Mary Fuller was born in 1864 in Perryopolis, Pa., and grew up there. She spent much of her childhood with an uncle, Alfred M. Fuller, a multimillionaire coal and cattle man who was among the first Americans to ship beef to Europe by freezing the meat. After her uncle died in 1917, she inherited some $5 million — nearly $80 million today — from his estate.
She left Perryopolis in 1887 and returned only once in the 61 years that followed. She married and divorced twice, the last time to hotel manager J. Miller Frazier of Philadelphia, and lived most of her life in Pennsylvania.
However,  court documents say there were “relatively short periods during which she lived in various cities in California, Kentucky, Nevada, Connecticut, New York, and France. She built or purchased a number of homes. She lived in some of these homes; others she abandoned before completion.”
In March 1946, she paid today’s equivalent of a million dollars for a 13.5-acre estate on North Street. There she lived alone with her servants and was known locally as an eccentric. A Pennsylvania court described her “palatial” 12-room house in Ridgefield where “only a few rooms were furnished. Rugs in rolls were in evidence throughout the house and were never finally laid.” Nonetheless, she had her last will drawn up in Ridgefield by Judge Ralph E. Cramp.
By 1948, she was building a new house outside Philadelphia and planned to move there. That January, she put her Ridgefield estate on the market and admitted herself to a New York City sanatorium where, that August, she died. (The house, just south of Pinecrest Drive, was sold in 1949 to Sherwood Summ. It was later owned by Ridgefield builder Tony Czyr, who subdivided the acreage.)
Frazier left an estate worth $2 million ($20 million today), most of which went to Perryopolis, where “I was born and lived, and where my father and mother lived and my grandfather and grandmother lived,” her will said.
Among 18 much smaller grants was one peculiar one: A $100,000 trust fund to provide a watchman and upkeep for the family mausoleum in a Perryopolis cemetery. As a result of the fund, a 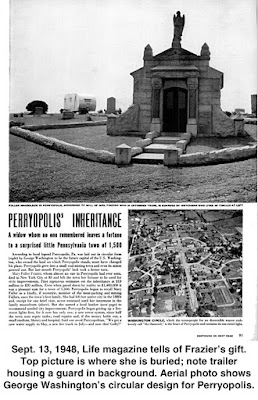 guard was hired and lived in a trailer parked in the cemetery near the mausoleum.

The Perryopolis bequest made national headlines, including several stories in The New York Times and a two-page spread in Life magazine — which included a picture of the mausoleum with the guard’s trailer in the background. (Frazier herself was never pictured.)
The bequest also attracted the attention of a Chicago man named Bales, who a Pennsylvania court later described as “a professional heir-hunter” with a criminal record. Bales and an attorney associate named Berg from Chicago approached six alleged relatives of Mrs. Frazier and offered to fight the will and its bequest to Perryopolis — free of charge if they lost, and for 25% of the value of the estate if they won.
The legal battle took two years. In a lengthy decision in the Pennsylvania Court of Common Pleas, a judge ruled the six could not prove a valid relationship to Mary Frazier. He pointed out that none of the six even went to her funeral — they did not “know that she was dead for a few days until we seen it in the paper,” the judge quoted one plaintiff as saying. He then pointed out that “none of these alleged first cousins ever saw or communicated with [Mrs. Frazier] except Emma Mae and the last time Emma Mae communicated with her was before 1900.”
Clearly irked by the case, the judge accused Bales and Berg of champerty  — an illegal agreement in which a person with no previous interest in a lawsuit finances it in order to share the disputed property if the suit succeeds. “The solicitation and champerty in this case are patent,” he said. “We would be derelict in our duty were we to lend the aid of this court to contestants in this litigation, so begun and so fostered.”
Perryopolis is an unusual community of 1,700 people south of Pittsburgh. Most of it was part of  56,000 acres once owned by George Washington. In a 1770 visit, Washington said the place was “as fine a land as I have ever seen, a great deal of rich meadow; it is well watered and has a valuable mill seat.”
He drew up plans for a town, laying out the roads in the design of a wagon wheel — just  as Washington, D.C. would later be laid out. (There is a legend Washington wanted Perryopolis to be the capital of the United States.) After Washington’s death in 1799, his land was sold and when a town was developed, his circular layout was used. But rather than name the place for its former owner and designer, the town fathers chose to commemorate Oliver Hazard Perry’s famous victory over the British on Lake Erie in the War of 1812.
In August 1948, Perryopolitans were in shock at the news of the enormous bequest. Hardly anyone in town had ever even heard of Mary Fuller Frazier.
“Mining Hamlet That Lacks Lights Inherits Millions in Woman’s Will,” said the two-column headline in The New York Times Aug. 18. The reference to lights was apparently designed to show how poor and backward Perryopolis seemed — indeed, the community had only one streetlight, and lacked many other amenities.
Frazier somehow knew Perryopolis needed help, and specified that her bequest be used for “public, charitable, literary or educational purposes.” Through her financial advisers, she had indicated “she wanted to provide lighting, a water system, schools, roads, and other things the town needed and that funds be provided for the upkeep of these improvements so there would be no burdens on the taxpayers,” said Howard Adams, the town banker, who had been consulted by her attorneys before the will was drawn up.
Today, largely thanks to Mary Frazier, the community has Frazier High School and Frazier Middle School, as well as the Mary Fuller Frazier Library, plus other facilities and services it might not otherwise have had.
Ten years after her death, as the new Frazier School District was building its new high school, the Class of 1958 dedicated its yearbook, The Commodore, to this mysterious benefactor.  “It is only through her generosity and loyalty to her hometown, that our new school is becoming a reality,” the class said. “Mrs. Frazier, heiress of a local coal-mining fortune and native of Perryopolis, made possible by her will, our splendid new building and contributed much to other progress in our community. May her qualities be reflected in the character and conduct of the students who will attend the school dedicated to her, the Mary Fuller Frazier High School.”