Man of Mysteries
“Writing mysteries takes a thief’s mind,” Thomas Walsh told The Ridgefield Press in a 1962 interview. But he also confessed that “the life of a writer isn’t all beer and skittles.
“One good thing is that you can work wherever you hang your hat,” he said, “but writing is a frightening business. You sit down there with a blank piece of paper and you have to fill it. A doctor or lawyer or insurance man gets out and talks to people, but a writer just sits by himself and writes.”
Walsh did plenty of writing. He turned out 11 novels including “Nightmare in Manhattan,” which won a 1950 Edgar Award and was made into the film, “Union Station,” starring William Holden and Barry Fitzgerald.
“The Night Watch,” a 1952 book, became the 1954 movie, “Pushover,” starring Fred MacMurray and Kim Novak.
A native of New York City, Thomas F. M. Walsh was born in 1902 and began writing for his high school newspaper. He dropped out of Columbia in his sophomore year and went to work as a reporter for The Baltimore Sun.
He started writing short stories to supplement his meagre reporter’s salary and began selling to 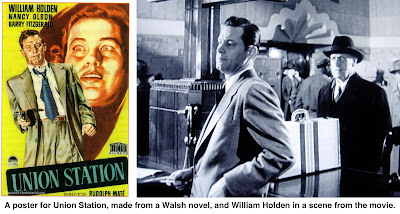 major magazines. Saturday Evening Post carried more than 50 of his mysteries, but his work also appeared in Collier’s, Good Housekeeping, Woman’s Home Companion, and other periodicals.

Most of his stories featured “hard-shelled, tender-hearted Irish cops.”
All 11 novels were set in New York City. He won the first Inner Sanctum Mystery Award for “The Eye of the Needle,” and his other books included “The Dark Window,” “The Action of the Tiger” and “Dangerous Passenger.”