Mahonri Young:
The Greatest Moment
Mahonri Young, a preeminent American sculptor of the 20th Century, was a month short of his 70th birthday when perhaps his most famous work was unveiled: A tribute to his grandfather, Brigham Young, on the centennial of his arrival at what was to become Salt Lake City.
“This is the greatest moment of my life,” Young said at the 1947 unveiling of the 60-foot monument outside Salt Lake City, Utah, attended by 75,000 people.
Yet only two months earlier, his beloved wife, Dorothy, daughter of American Impressionist artist J. Alden Weir, had died.
Mahonri Mackintosh Young was born in Salt Lake City in 1877, the same year his grandfather, Mormon leader Brigham Young, died. Twenty days after his birth, the infant Mahonri received the blessing of his grandfather, who was president of the Church of Jesus Christ of Latter-Day Saints, and the governor of Utah territory.
Brigham Young had led the Mormons to their promised land in the Salt Lake basin, where they founded the city. As their wagon train approached the the basin, Young was lying exhausted and burning up with fever in the last wagon. As he looked down into the valley, he said, “This is the place.”
A century later, his grandson Mahonri engraved those words atop the the famous “This Is the Place Monument”  — a huge work that was created in Ridgefield.
Mahonri Young grew up in Salt Lake City where he began his art studies with J. T. Harwood, a painter. He was hired as a sketcher for the Salt Lake Tribune and by 1899 had saved enough money to move to New York and enroll in the Art Students League, where he later taught.
In 1901 he began studies at the Academie Julian in Paris and also traveled to Italy. In Europe he 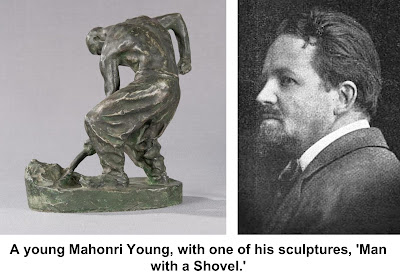 met prominent personalities in the arts including Leo Stein, brother of Gertrude, who took him to Pablo Picasso’s first exhibit in a Parisian furniture store, and Ernest Hemingway, who admired his work. He also associated with Robert Henri and the Group of Eight, leaders of the Ash Can School of American realism (Henri painted the noted portrait of Ridgefield General David Perry, also profiled in Who Was Who).

Young gained international recognition when his work was exhibited at the Salon, the official exhibition of the Académie des Beaux-Arts in Paris.
Like his Ridgefield friend, Frederic Remington, Young was, throughout his career, an exponent of the West. Many of his paintings, etchings and sculptures dealt with Indians, cowboys, horses, and other aspects of Western life.
However, he also created works connected with industrial workers and even prizefighters. “Man with a Pick” and “Stevedore” are bronze figures now in the collection of the Metropolitan Museum of Art, and “Boxer” is at the Whitney Museum.
Young married Cecilia Sharp in 1907. She died ten years later of cancer. Although he had visited  artist J. Alden Weir in Ridgefield early in the 20th Century, Weir wasn’t exactly a catalyst in Young’s second marriage. “No matter how friendly Weir always was to us of the younger artists, he never introduced us to any of his three charming daughters,” Young said. “We never met any of them

until after he died. But it was no use. I married the most beautiful, the finest, the most talented of them, Dorothy.”

That was in 1931 and the next year, he moved to Weir’s farm in Ridgefield where he made his home much of the rest of his life and where he created hundreds of sketches and paintings of life at the farm, including scenes depicting animals, crops and farm laborers.
Soon after arriving Young built a studio behind the Weir homestead and next to his father-in-law’s, roomy enough to handle sizable sculptures and very bright, with large skylights. “At last I’ve got a studio large enough to do anything I want to do in paint or clay,” he said when it was finished. “If I ever have a big thing to do again, I will do it here even if I have to stay the whole winter.” The Young studio has been restored as part of the Weir Farm National Historic Site.
In 1939, he received the commission to create the big, centennial monument to his grandfather that would not be unveiled until eight years later. Most of the work on “This Is the Place” was done 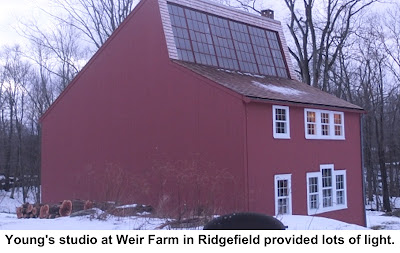 in his Ridgefield studio.

In 1950, Young also created the sculpture that represents the state of Utah in the National Statuary Hall at the U.S. Capitol in Washington: It is a rendering of his grandfather.
Young’s works are also in the collections of many major museums, including the American Museum of Natural History, the Smithsonian Museum of American Art, Metropolitan Museum of Art, the Whitney, Boston Museum of Fine Arts, the Brooklyn Museum, and the Harvard Art Museum.
Skilled at painting, drawing, etching and sculpture, Young taught almost every subject in the curriculum at the Art Students League, said Dr. Thomas E. Toone, author of the 1997 biography, “Mahonri Young: His Life and Art.”
Both this and 1999 biography, “A Song of Joys: The Biography of Mahonri Mackintosh Young, Sculptor, Painter, Etcher,” by Norma S. Davis, point out that despite his ancestry and upbringing, Young was not a participating member of Mormon church. “He liked cigars and wine and he found it humorous when he had to go to church twice in one day,” said Dr. Todd A. Britsch, a Brigham Young University reviewer of both books. Nonetheless, he was devoted “to his Mormon heritage and friends.”