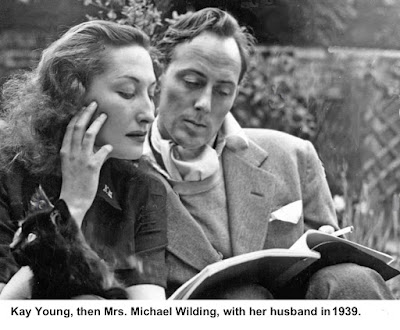 Kay Young Eason:
Actress Who Missed the Battle
Kathleen Young Eason, an actress who was a friend of some of England’s greatest theatrical ﬁgures, was better known locally as a pillar of her church and garden club. A longtime Ridgeﬁelder,  Eason acted on the British stage, a half dozen movies and later became a costume designer for RKO in Hollywood. She had been married to actors Michael Wilding, Douglass Montgomery, and Myles Eason.
A native of England who was born in 1912, Kay Young began her theatrical career as a student at the Guildhall School of Music where she had hopes of becoming an opera singer. “I was a lyric soprano, but I was very tall and decided I couldn’t be a great, fat opera singer,” she said in an interview in 1989, adding that she was five feet, ten inches tall when she was 13.
While still a student, she auditioned for a part in an opera being produced by Australian actor Cyril Ritchard, who was to later live in Ridgefield and be a major catalyst in her life. She did not win the part — “Cyril looked at me and said, ‘You’d be much too tall, taller than me!’ ” — but was picked as an understudy for a major role.
She then turned to acting and studied at the Royal Academy of Dramatic Art. Her ﬁrst break was a part in a Beatrice Lillie revue which, despite receiving poor notices, had a long run because of its star.
She was in various productions during the 1930s and early 1940s, performing with such stars as David Niven, Stewart Granger, Jill Esmond, and Sir Laurence Olivier.
In the late 30s, she met Michael Wilding at an audition, and the two were married in 1939. They later divorced, and he married actress Elizabeth Taylor.
It was in the 1930s that Kay Young met Olivier, then a young stage actor, and the two became longtime friends. “I knew Larry through the theater and was in one ﬂop with him,” she said. “He had even then a commanding presence and remarkable voice. And he had a devastating sense of humor.”
When he was making “Henry V,” Olivier invited many of his friends to a 12th Century abbey he and his wife, Vivien Leigh, owned in the country. Only after they had arrived and settled in did he 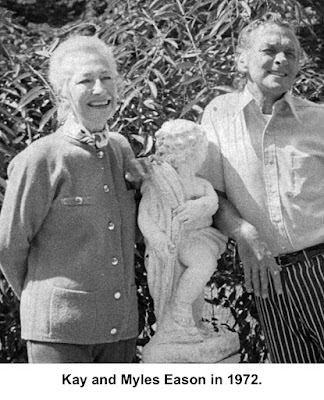 tell his friends he wanted them to perform in what was to be the famous Battle of Agincourt scene that would be shot there.

“We sat on those bloody great horses which we mounted in the stable and the horses were to back out. Mine wouldn’t back and when Larry say, ‘Where's Kay?’ I said, ‘I'm here in the stable.’ He gave my horse a tremendous whack, it shot out of the stable, and I fell off. Then my horse wouldn’t move. So I was never in the Battle of Agincourt.”
Kay Young did appear in a number of British movies, including Noel Coward’s Academy Award-winning film about World War II, “In Which We Serve.”
During World War II, she entertained the troops in North Africa, sharing a tent with Vivien Leigh. “We traveled as soldiers, and many an hour I spent under tanks and trucks and I was scared.”
In 1944, she was sitting in front of a ﬁreplace in a London apartment building when it was hit by a German V-2 rocket. “The building collapsed,” she recalled. “All the windows were blown out and I was drawn halfway up the chimney. My arms were burned…”
The same year, she began studying at the London School of  Fashion Design, and started designing for movies. Her work for ﬁlms brought her to RKO in Hollywood in 1950.
In 1953, a year after her divorce from Wilding, she married actor Douglass Montgomery, whom she had met in London at the end of the war.  Montgomery had become a Hollywood star, but also did   television plays in New York City. She appeared in at least one film, “Woman to Woman,” with him.
She eventually became a successful interior decorator, living in New York. She and her husband decided to move to New England and in 1965, moved to a home on Golf Lane. A year later Montgomery died.
In 1968, she was at a party at the Ridgeﬁeld home of Cyril Ritchard (perhaps best known for his portrayal of Captain Hook in the famous 1954 TV production of Peter Pan). There she was introduced to another actor from Australia, Myles Eason, who had met her many years earlier at the Chelsea Arts Ball in London.
“Who is that girl?” Mr. Eason had asked Laurence Olivier at the ball. “I’m going to marry her some day.”
And six months after they were reunited in Ridgeﬁeld, the two were married.
In Ridgeﬁeld, Mrs. Eason was active in St. Stephen’s Church. She was a frequent lector and for a long while, was head of the lectors. She also worked each year at the Nutmeg Festival, the church’s fair. Both she and Myles were gardeners; she was a member of the Ridgefield Garden Club and he was an honorary member. For many years, she maintained the plantings in the watering trough triangle at the intersection of West and Olmstead Lanes.