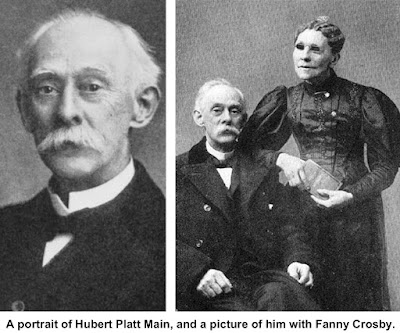 Hubert Main:
Holy Music
Ridgefield has had a surprisingly noteworthy history in the world of religious music: It was childhood home of one of the world’s most prolific hymn writers, it was the adulthood home of a major hymn publisher, and it was the birthplace of a major hymn composer. Oddly enough, Fanny Crosby, Lucius H. Biglow and Hubert Main all knew each other.
Hubert Platt Main was born in Ridgefield in 1839. His father, Sylvester Main, was a music teacher who became a compiler of hymn books and eventually joined Lucius Biglow in the music publishing business.
But Sylvester was also a childhood friend of Fanny Crosby, the blind author of more than 3,000 hymns, who grew up on Main Street. In fact, Crosby fondly recounted how Sylvester often protected her from the local bullies when she was a young girl.
Hubert displayed an early love of both music and independence. According to J.H. Hall in his book, “Biography of Gospel Song and Hymn Writers,” Main had an amazing memory of his early childhood to as far back as 1842 when he was three years old. “He hasn’t forgotten a whipping received in that year for repeatedly running off from home at evenings to the band room, hiding under the benches and listening to the music.”
As a child, he would compose tunes by speaking “do, re, mi, fa...” for the notes. “If, when walking on the street, any air came to his mind, he would apply the syllables to it, and sing away,” Hall said.
As a young man, he moved to New York City where compiled books of music, was a choir leader and organist in churches, and eventually joined Biglow and Main, the music publishing company that his father had owned with Lucius Biglow. (Biglow moved to Ridgefield in the late 1880s, buying the estate that is now Ballard Park — donated to the town by his daughter, Elizabeth Biglow Ballard.)
Over his lifetime, Main composed more than 1,000 works, including “singing school pieces, Sunday-school songs, hymn tunes, gospel hymns, anthems, sheet music songs, love songs, quartets, and instrumental pieces,” Hall reports.
He composed the music for hundreds of popular hymns of the mid-to-late 19th century, among them “We Shall Meet Beyond the River,”  “Blessed Homeland,” and “The Bright Forever”— the words of the last two were written by Fanny Crosby.
In the 1915 book, “Fanny Crosby’s Story of Ninety-Four Years,” she called Hubert Main “one of my most precious friends.” The book includes a picture of the two, seated together, called “Fast Friends.”
Main also collected a huge library on music — he was “a veritable antiquarian in old music books,” said Hall. In 1891, he sold 35,000 volumes to the Newberry Library in Chicago, one of the world’s leading research libraries to this day.
Main was known not only for his independent thinking but for his sense of humor. “In regard to his religious proclivities,” Hall reports, “he was brought up a Methodist, joined the church in 1854 before he came to New York but he quaintly says that he is not outrageously pious, and could laugh at a funeral, even his own, if he saw anything comical, and he could just as easily shed tears at anything tender and pathetic.”
Hall added, “He is full of sunshine and good humor. He is immensely entertaining in his conversation, and one of  the best of companions. His letters to his friends are usually full of wit and humor. He remarks that he might be more dignified, but it would increase his doctor's bills.”


Main lived his later life in New Jersey where he died in 1925. He is buried there beneath a stone that says, “We shall meet beyond the river.”