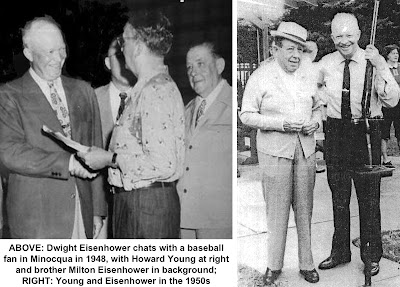 Howard Young:
Art and Ike
One weekend in 1952, four men gathered to discuss a decision that was to affect the history of the nation and even the world.
The four were multimillionaire art dealer Howard Young, Hearst newspaper columnist Bob Considine, former Scripps-Howard columnist Frank Farrell, and the president of Columbia University, Gen. Dwight David Eisenhower.
Eisenhower had been toying with the idea of running for president. At the meeting Farrell told the general that he thought the powerful Scripps-Howard newspaper chain would support him if he were the Republican candidate.
That was enough to make Eisenhower decide to run for president. As Farrell explained later, “without Scripps-Howard support, he would not have ventured into politics.”
The place where the meeting took place was Howard Young’s country estate on lower Branchville Road in Ridgefield.
Young called Eisenhower his closest friend, and over the years the two spent countless hours together, not only in Ridgefield but at Young’s Wisconsin retreat where the two would hunt and fish together.
A number of notable people spent time at the Branchville Road home on the shore of Candee’s Pond, including one of the 20th Century’s most famous actresses. Young’s longtime secretary was his nephew, Frank Taylor, the father of Elizabeth Taylor. As the actress’s great-uncle, Young played host to her on a number of occasions.
Stephen Howard Young was born in Belle Center, Ohio, in 1878, a son of a highway construction supervisor. “His mother told him at the age of nine that Belle Center would never be big enough for his ambitions,” said columnist Farrell, a longtime friend of Young.
He left home at the age of 10, earning a living with a newspaper route and delivering laundry.
By 15, he was working for the sales staff of a printing company that was using a new method of color lithography. Three years later, he had amassed a small fortune, some $400,000, which he promptly lost in the panic of 1896.
Still only a self-educated teenager (he read voraciously), Young started over by establishing his own business of creating custom portraits in oils, hiring artists to do the paintings. He would read obituary notices, obtain a photo of the deceased person, hire an artist to paint a portrait from the picture, and then convince the family to spend $2,000 on the painting.
That soon led him into the world of buying and selling the artworks of established, even famous painters. He opened his first gallery in St. Louis, Mo., when he was in his 20s.
While delivering a Frederic Remington painting to a customer in Oklahoma, Young happened to be invited into a poker game with Harry Sinclair, head of Sinclair Oil, and Frank Phillips, who founded Phillips Petroleum. It was the early days of the automobile, and the two oilmen encouraged him to invest in oil. He did so and eventually gained considerable wealth and with it, the ability to expand and improve his business.
Sinclair also told Young he should move his art business to New York City, even offering financial assistance with the move. Young opened on Fifth Avenue and eventually became what The New York Times called “one of the world’s wealthiest art dealers.”
Over the years Young bought and sold some of the most valuable pieces of art to come on the market, including works worth more than $1 million.
“His proudest single achievement was his discovery of ‘The Lost El Greco,’ titled ‘Christ Healing the Blind,’” Farrell wrote. Young found the picture, then attributed to Tintoretto, on sale at Christie's in London. He bought it for a customer for £37,000 (about $745,000 in today’s dollars), and had it authenticated in the Prado as the original ‘Lost El Greco.” The painting now hangs in the Metropolitan Museum of Art in New York City.
Young admitted making two major mistakes during his career. One was selling IBM stock that would have been worth millions of dollars had he held onto it. The other occurred in the 1930s when he bought a Van Gogh in Rotterdam for $5,000 and soon sold it for $10,000 ($174,000 in today’s dollars). While he doubled his investment, the same painting sold three decades later at a Parke-Bernet auction for $850,000 ($5.2 million today).
Young enjoyed vacationing at Minocqua, near Woodruff and Lakeland, in the north woods of Wisconsin. There, Eisenhower — and sometimes the president’s brothers — would visit to enjoy the woods and lakes; Eisenhower especially liked to swim in a lake on Young’s property.
After learning of his victory at his headquarters on election night in 1952, Eisenhower turned to Young and asked him where he would like to be ambassador. Young reportedly replied: “In Minocqua, Woodruff and Boulder Junction.”
After Eisenhower had his famous heart attack in 1955, Young built an electric tramway — a small funicular railway — down a steep hill from his home to the lake. “Its car carried Eisenhower for his daily swims that he loved so well,” The Lakeland Times reported. “Without it, Ike could not have negotiated the steep hill.”
Young had been a patient of a local Lakeland physician and once promised the doctor to donate to the Lakeland Memorial Hospital. After Young’s death in 1972 at the age of 94, it was discovered that he had more than kept his promise: He left some $20-million (more than $115 million in 2015 dollars) in a trust to build a new hospital. In 1977, the Howard Young Medical Center opened its doors in Woodruff.