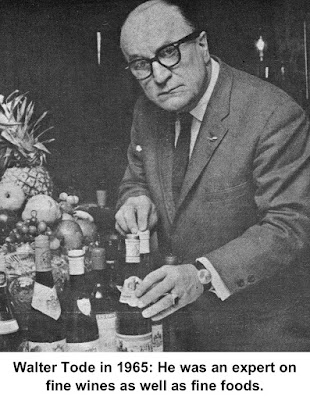 Walter Tode:
A Top-10 Chef
Ridgefield has been the home of the kitchens of some of the finest chefs of the 20th Century, but few were on a level of Walter Tode. Once listed among the 10 best chefs of the world, Tode owned and operated The Inn at Ridgefield — also called Tode’s — for 20 years.
Walker Karl Tode (rhymes with Cody) was born in Nancy, France, near the German border, in 1908 and even as a child, loved to cook. His parents paid to have him apprentice, at age 13, at the Ritz Hotel in Paris. He went on to work at a casino in Germany, then in Rio de Janeiro. He returned to Germany where he earned a degree in hotel management at the University of Heidelberg.
“I was then imported to the Fort Sumter Hotel in Charleston, S.C., U.S.A, the youngest chef they’d ever hired,” Tode told an interviewer in 1965. (The interviewer, Fred Reynolds, also described Tode as a man with “Charles Boyer charm, the Eric von Stroheim authority, the Roland Young [“Topper”] build and walk.”
Tode next worked at the Ambassador Hotel in New York, became executive chef for the Roney chain of hotels, and in 1935, opened and ran Jack Dempsey’s, a famous New York restaurant on Broadway, across from the old Madison Square Garden. The restaurant lasted until 1974, but Tode left in 1940 to open new restaurants in hotels in Miami Beach.
In 1945, he came back north and briefly took over the kitchen at the Silver Spring Country Club. He liked Connecticut and a year later, bought the former Kane Inn on West Lane — once the 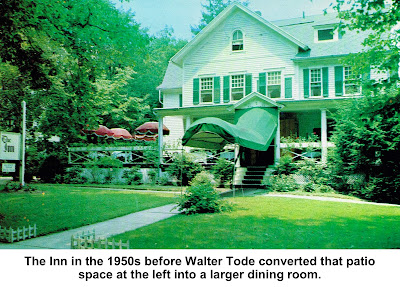 His new restaurant, with what interviewer Reynolds called “elegant, intimate opulence,” drew diners from throughout Fairfield and Westchester Counties, as well as New York City.
Tode suggested he had an advantage over most American restaurateurs. “Too few restaurant owners come up through the fine kitchens,” Tode said.
That “elegant, intimate opulence” of the dining rooms remained largely unchanged during his years at The Inn, even though he’d sometimes try to update the decor. “Every time I get ready to 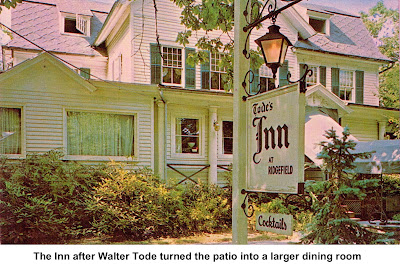 make changes, people scream,” he told a magazine in 1966.

In 1951, Tode was named one of the 10 Outstanding Chefs of the World by the International Societe Gastronome in Strasbourg, France, one of only two Americans so honored.
While running The Inn, he also served as director of food service for American Airlines, was a consultant for Intercontinental Hotels, and was an associate professor at Cornell University, where he taught in the School of Hotel Administration. He also took a shot at producing gourmet foods for wholesale distribution, establishing the “Gastronomical Galley” line of foods in 1959. It did not last long.
Tode also made headlines in 1961 for getting into an early morning disagreement with his 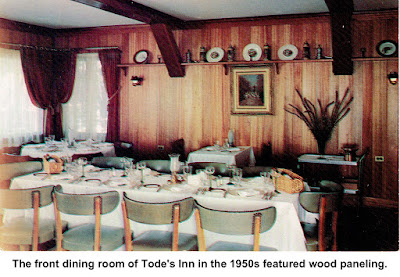 bartender, and punching him in the face which reportedly broke his jaw. He was arrested, and fined $200 for assault and breach of the peace. However, he was also sued by the bartender for $15,000 ($120,000 in 2016 dollars), but a Superior Court judge ruled in Tode’s favor.

In 1967, after 21 years of operating The Inn and 46 years of creating fine foods, Tode sold the restaurant (which is now Bernard’s) and essentially retired, although he taught classes in the area for several years. He died in Danbury in 1984 at the age of 75.