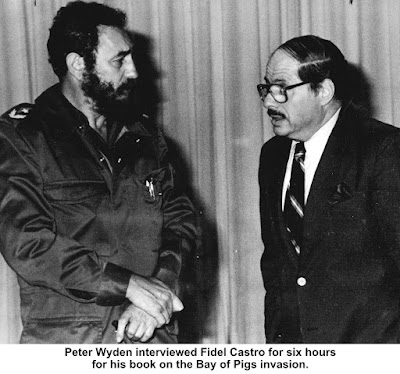 Peter Wyden:
20th Century Issues
Peter Wyden’s 15 books examined such major 20th Century events and issues as the Holocaust, the atomic bomb, the Berlin Wall, mental illness, Masters and Johnson’s sex clinic, suburban kids, and the Spanish Civil War.
But perhaps his most successful book was “Bay of Pigs: The Untold Story,” which won an Overseas Press Club Award. Research for it included a six-hour interview with Cuban premier Fidel Castro. Cautious and distant at first, Castro eventually warmed up, even occasionally poking Wyden in the belly and borrowing his notebook to map out battle movements as he described his victory.
“He was very proud — for a good reason,” Wyden said in 1979. “How many island countries have licked the United States of America? Nobody. Look at it objectively, no ideology attached. He won. It was the most spectacular defeat of the United States in this century.”
Peter Wyden was born in Berlin, Germany, in 1923. His Jewish parents — a businessman and a singer —  fled the Nazis in 1937, and Wyden was 13 years old when he arrived in New York.
He later wrote about his boyhood experiences in Germany in the book, “Stella, One Woman’s True Tale of Evil, Betrayal and Survival in Hitler’s Germany,” in which told the story of a girl he had known who survived the Holocaust by hiding her Jewish heritage and collaborating with the Nazis.
He studied at the City College of New York and began writing for The Daily Metal Reporter, a trade publication, in 1942, but soon joined the U.S. Army, serving as a writer in the Psychological Warfare Division.
After the war, Wyden worked for daily newspapers in Wichita and St. Louis before turning to magazines. He became Washington correspondent for Newsweek, an editor of Saturday Evening Post, a senior editor of McCall’s, and executive editor of Ladies Home Journal.
He began turning to books in the 1960s. Wyden’s writing “combined exhaustive research with a sense of the human and the dramatic,” said Macklin Reid in a 1998 Ridgefield Press obituary of the journalist. His book, “Day One: Before Hiroshima and After,” chronicled the creation and use of the world’s first atomic bomb, and his research included spending five weeks in Japan. The book became the basis for the Emmy Award-winning 1989 CBS movie, Day One.
“I think probably his favorite book — which is not necessarily the one he’s remembered for the most — is the book on the Spanish Civil War,” said his wife, Elaine Seaton Wyden. In the introduction to “The Passionate War: A Narrative History of the Spanish Civil War, 1936 to 1939,” Wyden described the pull that drew idealists from around the world to fight in Spain as volunteers: “The Republican causa stood against Hitler, the priests, the landowners, the military caste, the privileged. The opposing Nationalist Movimiento, led by General Francisco Franco, lined up against Marxism, the labor unions, the land hungry, the blasphemers.”
His last book, published a few months before his death, was one he said he didn’t write for many years because it was too painful. “Conquering Schizophrenia: A Father, His Son and A Medical Breakthrough,” detailed his 25 years of dealing with his son Jeff’s mental illness as well as modern medical treatment of schizophrenia and how families can deal with the disease. “You have to be in there, so you can quietly and diplomatically assist in the treatment,” Wyden said. “It’s a career.”
Wyden’s other son is Ron Wyden, a United States senator from Oregon since 1996. Of his father, Senator Wyden once said, “My dad probably was the one who showed me life can be silly sometimes, and you better accept it.”


Wyden was 74 years old when he died of a stroke. He had lived in Ridgefield for 24 years.