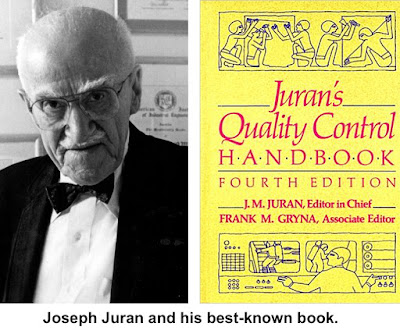 Joseph Juran:
The Quality Man
Dr. Joseph Juran overcame a deprived, even abusive childhood to become an internationally famous expert in “managing for quality.” His work helped transform resource-poor, postwar Japan from a synonym for shoddy goods into an industrial superpower famed for the quality of its products.
Born in 1904 in a dirt-poor, remote Romanian village, Juran and his family came to the United States in 1912, expecting the streets to be literally paved with gold.
“Not only did they find there was no gold, there were no pavements, and they were supposed to do the paving,” his son Charles Juran said at a 2004 testimonial.
He overcame an “abusive childhood,” said his grandson, G. Howland Blackiston. “It was extraordinary to me that he managed to turn that around. He forgave society for the many problems it presented him and decided to devote his life to paying it back.”
Blackiston produced the 1996 documentary, “An Immigrant’s Gift: The Life of Quality Pioneer Joseph M. Juran,” that was aired on public television.
Juran earned degrees in electrical engineering and the law, and went to work for Western Electric. He focused on the quality of work and workers,  and over his career he wrote 16 books – including his famous “Quality Control Handbook” – and hundreds of professional papers.
“Because of the work done by Dr. Juran and his counterpart, Edward Deming, quality tops the list of attributes consumers expect to find,” said Andy Mais in a 1996 profile of Juran in The Ridgefield Press. “But there is more to quality than simply putting parts together. Dr. Juran sees quality as the way for mankind to save itself from itself.”
For many years Juran was a professor and chairman of the Industrial Engineering Department at New York University, where he inspired many students. (Once, when there was a power failure and the classroom turned pitch dark, he remained unperturbed. “I can teach in the dark if you can learn in the dark,” he told his students.)
In 1979, Dr. Juran founded the Juran Institute, then located in Wilton, “to create new methods and tools for making quality happen within organizations throughout the world.”
He and the institute have advised hundreds of major corporations on how to attain high quality products. His concepts and methods have contributed to the creation of the new science of “managing for quality.”
“He created this institute, put a million dollars of his own money into starting that up…[yet] he’s never drawn a salary,” Blackiston said in 1996. “Matter of fact, at one time he owned essentially all the stock. He’s given it away to the employees, most of it.”
The institute is now located in Southbury.
Dr. Juran received more than 40 medals, fellowships, and honorary degrees from 12 countries. These included the Order of the Sacred Treasure, awarded by Emperor Hirohito of Japan for Dr. Juran's “development of quality in Japan and the facilitation of Japanese and American friendship,” and the National Medal of Technology, awarded by President George H. W. Bush “for development of key principles and methods by which enterprises manage the quality of their products and processes.”
Joseph and Sadie Juran lived on Old Branchville Road for 18 years, and moved to an assisted living center in lower Westchester around 2002. He died in 2008 at the age of 103. When Sadie died later the same year, she was six days short of her 104th birthday.
The Jurans had been married for 81 years.


Joseph Juran’s brother was motion picture director Nathan Juran who won a 1942 Academy Award as an art director for the classic John Ford/Darryl Zanuck film, “How Green Was My Valley.”
at November 16, 2016