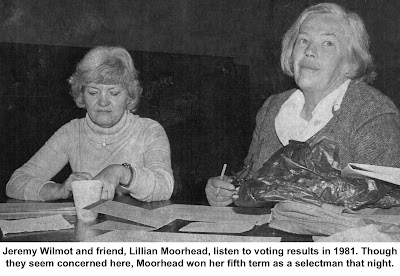 Jeremy Wilmot:
A Sense of Past and Place
Few people have served Ridgefield in more ways for more years than Jeremy Wilmot. A member of five town government agencies over her half century as a Ridgefielder, she was best known as a champion of historic preservation at a time when Ridgefield was losing some of its ancient  buildings and identity.
“By appearance or association, Ridgefield's architecture and local histories provide us with a sense of past and place,” Wilmot wrote in 1981. “Our landmarks root all of us to Ridgefield, no matter whether newcomer or native.”
Jeremy Griffiths Wilmot was born in New Jersey in 1929. Her family moved to Connecticut and she graduated from Greenwich High School in 1947, attended the Colorado School of Mines, and later finished her college education at Western Connecticut State University.
She moved to Ridgefield in 1955 and, along with raising a family, began her involvement with the community by joining the League of Women Voters and by penning letters to The Ridgefield Press on wide variety of issues.
As a member of the town’s first Charter Revision Commission in 1963, she got to know the inner workings of Ridgefield government. She later served on the Historic District Commission and on the Zoning Board of Appeals. In 1989, she was elected to the Planning and Zoning Commission, but in the 1990s, left to be elected a member of the Board of Selectmen.
Her most tangible legacy to the town was in historic preservation. In the 1970s, she was a founder of the Ridgefield Preservation Trust, an organization that eventually grew into the Ridgefield Historical Society. Calling herself a “field director and foot soldier,” she collaborated with fellow trust founder Madeline Corbin in researching and writing the voluminous Ridgefield Historic 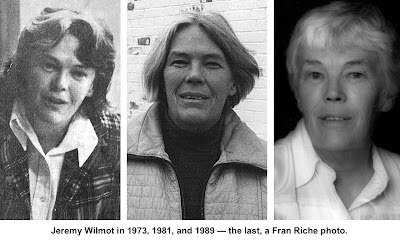 Architectural Resources Survey, cataloguing the construction techniques, architectural style, and significant social history of some 600 of the town’s buildings.

The 1,500-page document was adopted as an official part of the town’s Plan of Conservation and Development, and is still used regularly by the town planning staff to make owners aware of their properties’ history.
“It wasn’t one of those programs that just died,” Wilmot said in a 1980 interview with The New York Times. “Instead it sensitized our people to the history of their houses.”
Her work in “sensitizing” people to Ridgefield’s history didn’t end there. She worked on setting up an early oral history program for the Keeler Tavern Preservation Society,  and organized a Catoonah Street Festival to celebrate that neighborhood’s varied mix of architectural styles; in the process, she helped produce a booklet describing the street’s history and buildings.
Her research and passion for preservation were involved in the efforts to save the Weir Farm as a national park and to renovate the old Ridgefield High School auditorium into today’s Ridgefield Playhouse.
Wilmot was also active in the Democratic Party, serving on the Democratic Town Committee and attending state conventions, often as a delegate and frequently challenging the party establishment on behalf of the liberal or peace wing of the party. She was also involved in the Ridgefield Women’s Political Caucus, a 1970s organization whose legal actions against the town led to the expansion of the Ridgefield Boys Club into the Ridgefield Boys and Girls Club.
For a time she made her skills available professionally as a “house detective,” researching for property owners the architecture and history of their homes. She also led workshops on how to research a property's past.
“When she wasn’t doing her research or running for office, she was in her flower garden,” said daughter, Jessica Wilmot. “This also was a love of hers, so much so that she took a job with the Parks and Recreation Commission solely to care for Ballard Park.” (Jessica, longtime owner of The Ancient Mariner, was one of her six children; another was the late Tony Wilmot, popular RHS baseball coach and restaurateur, who is also profiled here.)
Over her years in Ridgefield, she and her former husband, Clifford, owned several old homes, including one overlooking Lake Mamanasco at the end of Pond Road. She later moved to a large old house on Main Street near the fountain, and then to a historic house on upper Wilton Road West.


In the late 1990s she relocated to Lakeville for a decade or so, before returning to Ridgefield for her final years. She died in 2010 at the age of 80.