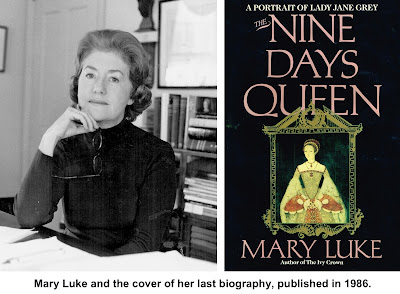 Mary Luke:
Biographer of Ancient Royalty
A long-ago world of Tudor and Elizabethan royalty fascinated Mary Luke, a meticulous and critically acclaimed novelist and biographer whose specialty was the wives and children of Henry VIII.
“History books give you the facts and we all know that Henry VIII had three legitimate children,” Luke told an interviewer in 1970. “What history books don’t tell is their relationship to each other and to those around them.”
From her first book, “Catherine the Queen,” through her last published work, “The Nine Days Queen: A Portrait of Lady Jane Grey,” she set about chronicling the often complex relationships of royal characters of the 16th and 17th Centuries.
Born Mary Munger in 1925 in Pittsfield, Mass., Luke graduated from business school and worked in advertising,   for a documentary film company and for RKO Studios in Hollywood before finding herself as a writer.
Between 1967 and 1986, she wrote seven books on Elizabethan and Tudor royalty, all well received by The New York Times and other reviewers.
Luke researched her subjects thoroughly, visiting the places where the characters lived, reading their letters and journals, and viewing sites where dramatic episodes in her books took place.
A Ridgefielder for nearly 40 years,  Luke lived on Hawthorne Hill Road and was active in the community. She was president of the Ridgefield Library and a longtime board member. She also worked for the District Nursing Association (now Visiting Nurse Association), and the Thrift Shop, and was active in the conservation efforts of both the Ridgefield and Caudatowa Garden Clubs.
A prolific letter-writer, she often penned comments on Ridgefield affairs in the letters column of The Ridgefield Press. She supported some officials and criticized others, backed some proposals and opposed others, all with an eye toward improving the cultural or environmental quality of the town.
“I have lived here long enough,” she wrote in 1971 after being in town 21 years, “to remember many of the things which, in such a relatively short period of time, have disappeared. When, for instance, we had no shopping centers and less wall-to-wall black asphalt. Instead there were historic homes in those areas — homes which might have been restored  and remained useful. When I could have tea at ‘Graeloe’ [the estate that is now Ballard Park] and dinner at the old Outpost Inn [now Fox Hill condominiums] and not be concerned about the disappearance of the majestic old trees along Cornen Avenue, now the Danbury Road, our ‘Gasoline Alley.’ It seems that familiar areas or landmarks are now being swallowed up so quickly, no one has a chance to protest — until it is too late.”
She died in 1993 at the age of 74.