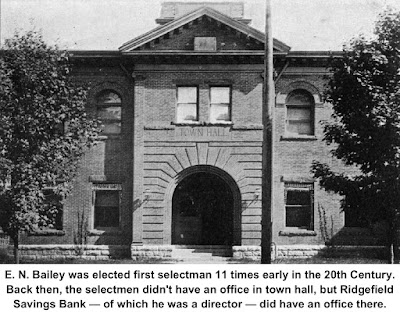 E. N. Bailey:
Frontiersman First Selectman
E. N. Bailey was no ordinary first selectman. He “surprised some and frightened others by arriving frequently in the village with large copperhead snakes twined around his neck and shoulders,” The Ridgefield Press reported at his death in 1955. “He wasn’t afraid of them and gave the impression that he wasn’t afraid of anything else either.”
Eldridge Nettleton Bailey was born in Shelton in 1876. Usually called “E.N.” or “Bill,” he came to Ridgefield at the turn of the century to work for Henry B. Anderson who was then developing his vast estate on West Mountain, now the Eight Lakes Estates (Anderson is also profiled in Who Was Who).  Bailey was a construction engineer, and supervised the building of Anderson’s roads as well as the Anderson mansion on West Mountain. “He was a tall man, carried himself erect, walked with great strides, and wore the striking clothes of a frontiersman,” said Karl S. Nash, Press publisher, who knew the man.
Bailey became head of the Ridgefield Water Supply Company, largely owned by Anderson, as well as Anderson’s Ridgefield Electric Company.
However, he was better known for his political career. Bailey was elected first selectman 11 times. The post was then part-time, and the term, one year, and he held the job most years from 1911 to 1926. But now always.
His political career began in 1910 when he was elected to the Board of Selectmen to serve with Benjamin F. Crouchley, a rare Democratic first selectman. The next year he defeated Crouchley for first selectman, but lost in 1912 to Charles B. Northrop. He returned to power in 1913, and was re-elected in 1914 and 1915. Orville W. Holmes then won the Republican nomination in contests with Bailey for three years in a row, but Bailey did not give up, finally winning the job back in 1919 and holding it until 1926 when Winthrop E. Rockwell was the victor “in a memorable party battle in the town hall,”  Nash recalled. Rockwell went on to hold the job for 20 years — Bailey tried once to return and failed.
He was “a force in Ridgefield affairs and remained a controversial figure throughout his public life,” Nash said in Bailey’s obituary.
Bailey was a director of the Ridgefield Savings Bank, now Fairfield County Bank. He and his wife, Lois, sang in the First Congregational Church choir. He also tried his hand at amateur theater, which led to a bit of a scandal. In rehearsing for a play in the 1920s, he fell in love with his leading lady, Miss Nina Olmstead. He and Lois were soon divorced and Bailey married Miss Olmstead. The two moved to a farm in Bradford, Vt., but, according to Nash, “his marriage foundered and he returned to Ridgefield and spent his declining years at The Elms Inn.”
He died in 1955 at the age of 77.