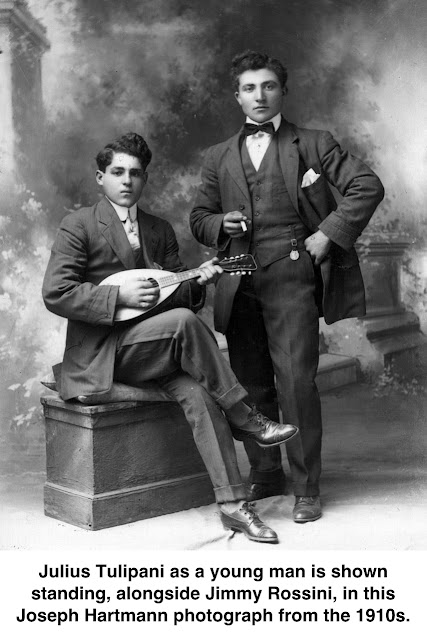 Julius Tulipani:
The American Dream
In reporting the death of Julius Tulipani on New Year’s Day 1983, The Ridgefield Press observed that “he had come to the United States from his native Italy as a boy of 16, achieving thereafter positions of trust and importance in his adopted community.”
Born in 1890 in Ripe, Tulipani arrived in New York in 1907, and made his way to Ridgefield, including walking up the three-mile hill from Branchville to the village. There, on Easter 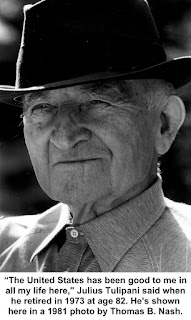 Sunday, he joined friends for his first meal in America — he had not eaten in two days because “we didn’t have any money,” he explained later.

Tulipani went to work almost immediately, building roads and other infrastructure for H.B. Anderson’s Port of Missing Men resort on West Mountain (now Eight Lakes Estates).
“My first home was in a camp,” he told his granddaughter, Beth Tulipani, in a 1977 interview. “I lived in a one-room shack with three or four other boys.” He earned $1.75 a day ($45 in today’s dollars).
Four years later, he began a career of working on local estates, starting out as a coachman, and soon working his way up to a superintendent, a position he held on a half dozen estates for the rest of his career. He did not retire until he was 82 years old.
He was superintendent of Col. Louis D. Conley’s Outpost Farm in the 1920s, but his longest post, beginning in 1927, was as superintendent of B. Ogden Chisholm’s Wickopee Farm on Peaceable Street, a job which he held until Chisholm’s death in 1944.
Chisholm was so pleased with his service that he gave his superintendent the portion of his 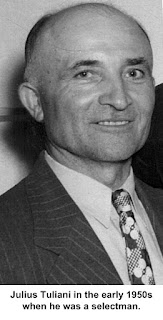 farm that fronted High Ridge, where Tulipani lived the rest of his life.

He later worked for other estates, including Jack B. Ward’s Ward Acres.
For most of his life here, he was active in the community. He was president of the Italian-American Club for 30 years — longer than anyone before or since. He was commander of the American Legion three times, and was one of the last living members of the Last Man’s Club of World War I veterans from Ridgefield.
He served as one of the first directors of the Boys Club and an incorporator of the Community Center when it began operations after World War II.He was elected to the Board of Selectmen three times from 1947 to 1953, and had long been a member of the Republican Town Committee.
An expert gardener, Tulipani was proud of the flowers he raised, once producing an Empire State dahlia measuring a foot in diameter. He began raising flowers while working for Colonel Conley, and continued gardening professionally and for fun throughout his life.
In a 1973 interview when he was retiring, Tulipani told Karl Nash of The Ridgefield Press, “The United States has been good to me in all my life here since 1907. I was out of work in all those 66 years for only a month and a half, and I never had to ask for a job. People always came to me when they needed somebody.”
In 1980, more than 500 people attended a 90th birthday party for Julius Tulipani. There, among several speakers, Judge Romeo G. Petroni described his achievements, saying they symbolized “the ideas of America, freedom and opportunity for all men. His story is the American dream fulfilled.”