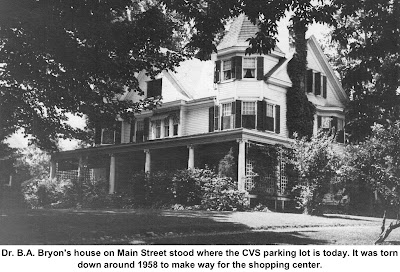 Dr. B.A. Bryon:
Physician and Entrepreneur
Long before “subdivision” was a common word in Ridgefield, Dr. Benn Adelmar Bryon was a subdivider, probably the first. A road and a neighborhood recall his name today.
Born around 1866 in Saugerties, N.Y., Bryon graduated from Bellevue Medical College (now New York University Medical School) in 1890 and came to Ridgefield at the turn of the century to open a medical practice.
He built a house on High Ridge that later served for decades as Frances Cleaners as well as a home to the business’s owners, Mr. and Mrs. Arnold Strouse. However, after a few years there, he bought a house on Main Street where he lived and practiced for many years. It stood where the CVS parking lot is now.
When he came here, there were only three other doctors in town — and one had a drinking problem. “His patients felt that he was an excellent practitioner of the medical profession,” former town historian Dick Venus said of Bryon.
The doctor, who always signed his name B. Adelmar Bryon, was often called “Barney” by townspeople. Venus theorized that it may have been because he drove rather fast, like race car driver Barney Oldfield, or simply because people made up a name for the mysterious “B.”
A small-town doctor didn’t make a lot of money back then so Bryon turned to other endeavors to supplement his income.
In 1903, he bought a piece of land at the top of Titicus Mountain on which a rock spring flowed. He dubbed the spring St. George and was soon bottling its output under the name of  St. George Pure Water. Sales were reportedly respectable.
But his real interest was real estate. “Barney was truly a man of vision and the town is better off because of his efforts,” Venus said.
Between 1908 and 1912, he developed Bryon Park, the subdivision off High Ridge and Barry Avenue that includes Bryon and Fairview Avenues and Greenfield Street. Consisting of dozens of homes, it was the first housing development in the town since the proprietors had laid out Main Street in 1708.
“In that day there were no zoning regulations in Ridgefield, nor any building code,” The Ridgefield Press reported in a 1980 feature on the Bryon family. “Dr. Bryon even enlisted the aid of his 16-year-old son to do electrical work in some of the new houses.” That son was Adelmar R. Bryon, who later became a missionary to China and longtime Presbyterian minister near Woodstock, N.Y.
Bryon also was the original developer of the Lake Kitchawan neighborhood of nearby Lewisboro. While his development there was popular and respected, another project he undertook in that town became famous as an eyesore.
According to former Lewisboro Ledger editor Chris Noblet, around 1940 Bryon wanted to build a service station on Route 123 where Oak Ridge Commons is now. When town officials rejected the plan, Byron apparently decided to seek a sort of revenge and instead erected some perfectly legal, but shoddy houses in a development he called Vista Woods. A half dozen houses were erected, and others started but never finished. “The houses were right up against the road so you could barely get a car in front,” wrote Noblet in 1977, quoting a resident, who also said: “They painted the houses up and put on imitation siding. It looked like shingles, but it was tar paper.”
Writing later about Vista Woods, Lewisboro historian Maureen Koehl said, “Everyone I talked with remembered the collections of derelict cars and household detritus littering the yards — bathtubs, iceboxes, sinks and just ‘stuff’ that never seemed to go anywhere. There were no lawns or attempts to landscape the yards.”
In 1961 a New Canaan firm bought up all the houses, tore them down, and built Oakridge Condominiums  and Oakridge Commons.
Bryon had a much better reputation in Ridgefield. He “exhibited not only a great deal of foresight, but a considerable amount of courage as well,” Venus said of Bryon’s development. “There seems little doubt that it was the biggest, if not the very first, project of its kind ever attempted in Ridgefield.”
Late in life, Dr. Bryon moved his practice and home to Norwalk where he died in 1949.
Incidentally, in 1921 his daughter, Kathryn G. Bryon, founded the town’s first Girl Scout troop, consisting of a handful of girls. She would be astounded at the hundreds of Girl Scouts in Ridgefield today.

Great story on Dr. Bryon! I had the honor of knowing his son Adelmar Bryon. One of my first jobs as a teenager was working for him around his home doing yard work. Eventually we became very good friends and would sit and talk for many hours about events and politics of the day. He was a good man and friend and is surely missed.