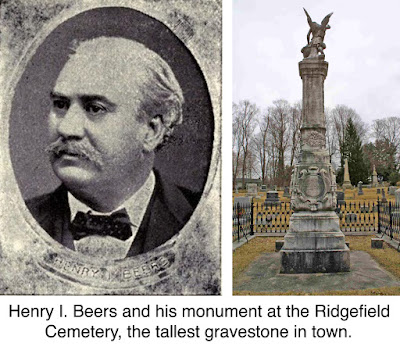 Henry I. Beers:
An ‘Adventure Capitalist’
The financial world today is full of venture capitalists. Back in the 1800s, a Ridgefield native could have qualified as one of the top “adventure capitalists.”
Henry I. Beers was a millionaire several times over who started his career as a Manhattan shop clerk and then cashed in on the California Gold Rush,  where he became restaurateur, newspaper publisher, and a real estate entrepreneur. He wound up a pioneer wildcatter in the Pennsylvania oil fields.
And long before Starbucks, Beers was charging the equivalent of $7 for a cup of coffee.
Born in Ridgefield in 1830, Henry Irving Beers grew up on the family farm until he was 15 years old. His sister, Lydia Anna, had married Peter P. Cornen, who owned a store in New York City where Beers would work while visiting. The young Henry loved the business world and, instead of returning to the farm, joined Cornen as a retailer.
When news of the Gold Rush broke in 1848, the adventurous Peter Cornen headed west, leaving his store in Beers’s hands. But soon Cornen told Beers to sell the business and join him in California.The two-month trip involved taking a ship to Panama, crossing the isthmus, waiting weeks for a steamer, and then sailing up to San Francisco. He arrived in January 1850.
San Francisco was a wild town. Rooms went for $16 a day ($450 in today’s dollars), and Beers and three friends paid $100 a month ($2,875) to live in what was essentially an open tent behind a house.
“The population was barely 2,000; one year later it was over 10,000,” Beers recalled. “We saw the city of San Francisco almost completely devastated by fire. The only buildings that remained were a few shanties and tents on the outskirts.”
Nonetheless, a month after the fire, “it had all the appearance of a flourishing city, such was the energy and push of the people of those days.”
Beers saw a need for a restaurant, and opened a place called the City Hall Lunch. “The fare was meager, but the prices were princely,” said historian John Woolf Jordan. Beers charged 25 cents ($7.20 today) for a boiled egg,  a cup of  coffee, or a piece of pie. Steaks ran from 50 cents to $1.50 ($43). Payment was often in gold dust.
He and his partner were so successful they sold the business three months later at a profit, and then opened a store, which also did a large and profitable business. However, the store was leveled in that great fire of May 4, 1851, which destroyed the city and left Beers almost penniless.
Beers rebuilt the business and within a year had recouped his losses. With a partner, he established an importing and shipping business and then started “True Californian,” a large daily newspaper. Washington Bartlett, later governor of California, was its editor. They sold the paper two years later.
Meanwhile he was also investing heavily in real estate.
In 1859, Beers moved his center of operations to New York City, but three years later, joined with Peter Cornen in buying and shipping petroleum from the recently discovered oil fields of northwestern Pennsylvania. Back then, oil’s chief uses were for lamp lighting fuel, primarily in the form of kerosene, and for lubrication; it was long before the internal combustion engine became  common.
In 1863, Beers and Cornen bought a farm near Rouseville.
“No drilling had been done when the property came into their possession, and they commenced operations in 1864, with such wonderful results that the wells yielded from 25 to 250 barrels a day for a period of two years, during which time the price of oil went as high as $13 a barrel,” said Pennsylvania historian Charles A. Babcock.
After only three years, their farm had generated more than $2 million in oil — over $31 million today. They refused an offer of $4 million for the farm, and Beer kept the land until his death in 1917.
Beers settled in nearby Oil City, Pa., and became a financial and civic leader in the region. However, he also held real estate investments in New York City and, with Cornen, sold Commodore Cornelius Vanderbilt 16 of the lots on which Grand Central Terminal stands today.
A Democrat, he was a delegate to the 1888 convention that nominated Grover Cleveland for president a second time.
He and his wife also maintained a winter home in southern California. (They were in a San Francisco hotel in 1906 when the great earthquake hit, and barely escaped with their lives.)
But it was in his home town that he wished to be buried — his iron-fenced plot in Ridgefield Cemetery includes the tallest gravestone anywhere in the town. He was 87 when he died.
“Truly the life of Mr. Beers has been an active and eventful one, crowned with abundant and wonderful successes that have more than counterbalanced the strokes of ill fortune that he has encountered from time to time,” said historian Jordan. “He has abundantly deserved all his good fortune, which is the natural outcome of his unaided efforts, for if there ever was a ‘self-made man,’ the title belongs to Henry I. Beers.”