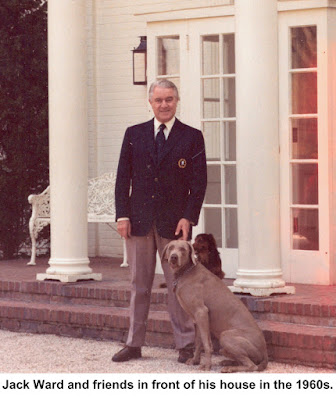 Jack B. Ward:
A Caring Citizen
The front-page headline in the Aug. 6, 1998, told the story: “Jack B. Ward, dead at 82, used fortune to aid others.”
The son of a leader in the baking industry, Ward gave away millions to Danbury Hospital, the Visiting Nurse Association, the Ridgefield Fire Department, Jesse Lee Memorial United Methodist Church, and many other organizations and individuals over four decades.
“All he ever wanted to do was to help people,”  said his longtime companion and business partner, Olaf Olsen.
Born in 1916, Jack Boyd Ward grew up on the family’s 800-acre farm in New Rochelle, N.Y. He was a grandson of Robert Boyd Ward, who founded the Ward Baking Company, later Continental Baking, whose most famous products included Twinkies and Tip Top Bread. In the early 20th Century, Ward was the largest baking company in America.
Ward’s father, William Breining Ward, became president of the company and was only 44 years old when he died of a heart attack in 1929 — son Jack was 13 at the time.
Jack Ward served as a flight instructor in the U.S. Army Air Corps during World War II. He was married and divorced, and had a daughter.
Introduced to the town through visits to dine at Tode’s Inn at Ridgefield and The Elms Inn, Ward moved to town in 1957, buying a spread on Peaceable Street and Golf Lane that was once the Ridgefield Golf Club. The estate had been created in the late 1930s by C. Chandler Ross, a noted portrait painter, and was later owned by Lyle B. Torrey. The 19-room Georgian Colonial house sat on 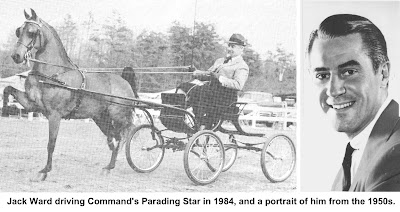 54 acres, most of which have since been subdivided.

Most of his 40 years here were spent at Ward Acres Farm where he and Olsen raised hunter and hackney horses, and maintained a museum of antique carriages that eventually included more than 50 vehicles. Up to 45 horses were stabled at Ward Acres in its heyday, and many were champions – one of his horses sold for $4.5 million.
He had loved show horses since he was a small child. At the age of 6, he participating in his first show, riding a Welsh pony in Madison Square Garden. “Two ponies were in the class,” he told an interviewer in 1990. “The other pony was black with a little girl on it. They asked us to trot and canter. I was bouncing along, having a wonderful time. The blue ribbon, that’s first, went to the other pony. My ribbon was red and I was delighted. I happened to love red. I didn’t care if it was first or second.”
He and Olsen had a pond at Golf Lane and Lewis Drive where Olsen especially maintained a collection of exotic waterfowl, including black swans from Australia. “That was quite an attraction, and many people would come up there and look,” Ward said.
His parents influenced his desire to give. “My family has always been interested in philanthropy in a very quiet way,” he said in 1982. “My father had many large memorials that he made for his parents. One was Ward Manor, an old folks home up in New York State. Another was a place for poor little mountain children down in Baxter, Tenn., and another was for farm boys in 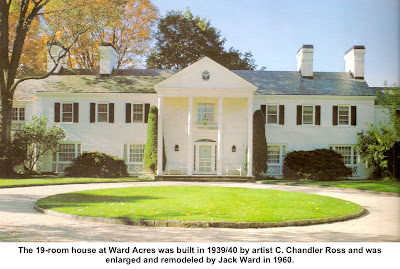 Kentucky. So I really grew up with this interest in giving money, not necessarily just for the poor but for the underprivileged and the sick and the old.”

Perhaps the fact that his father died so young led Ward to focus much of his generosity on health care.  Almost as soon as he arrived here, he bought the town a new, modern ambulance. He equipped the Districting Nursing Association with its first car and fixed up its headquarters on Catoonah Street.
In 1968, he contributed $150,000 ($1 million in today’s money) toward the cost of a new coronary intensive care unit at Danbury Hospital. Later the same year, having heard that cancer patients were having to travel to New Haven or New York for radiation treatment, he donated $100,000 ($690,000) for a cobalt unit to the Danbury Hospital, where he also served as a director and a trustee.
“In the early days when the Danbury Hospital development fund was just getting started, Jack played an enormous role,” said Frank Kelly, former president of the hospital. “The whole region owes him a tremendous debt of gratitude.”
Among his many smaller gifts was $5,000 ($36,000) to expand and fix up the old Titicus School for its use as the American Legion Hall.
Ward was a member of Jesse Lee Memorial United Methodist Church where he made a many donations in memory of his mother, Ethel Haney Ward, who had lived with him at Ward Acres until her death in 1965. These included the altar, stained glass windows, and bells. He helped plan the church’s move from an old building in the center of town to the new brick church at the head of Branchville Road.


Many of Jack Ward’s contributions to people and organizations, including the town, were private and unpublicized, noted Sue Manning, who was first selectman when Ward died. “He was a good citizen,” she added. “He was a caring citizen.”