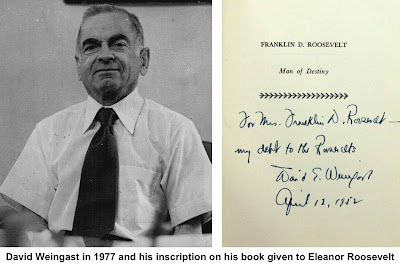 David Weingast:
Superintendent and Scholar
A few days after he accepted the job of Ridgefield superintendent of schools in 1967, Dr. David Weingast was offered a college presidency.
“I have often wondered what would have happened if I had accepted that instead,” said Weingast in a 1977 interview. But, he added, running a college was “no bed of roses” then, and “I have no regrets. Ridgefield has been a tough superintendency, but you have to remember that I became superintendent at a time when the academic world was a very tough place to be.”
Weingast, the second longest-serving of the town’s 20 or so superintendents, had indeed worked through tough times, a decade of turmoil with one crisis seeming to come on the heels of another: school building debates, problems with overcrowding, book burning controversies,  budget battles, a very unhappy teachers’ union, and many lesser issues.
But, he said, it was also a period of accomplishment: the creation of a modern, balanced program of studies, the introduction of greater emphasis on writing, the expansion of fine arts offerings, the increasing use of community resources, the hiring of capable staff, rewriting the whole curriculum from kindergarten through 12th grade using teams of teachers, and the improved management of money.
“I think we’ve achieved a good balance between teaching the basics and promoting student creativity,” Weingast said.
The most scholarly of Ridgefield’s superintendents — he wrote four books — and the only one to settle permanently in town,  David Elliott Weingast was born in 1912 in Newark, N.J., and began teaching elementary school there in 1931 at $1,300 a year.
He received his master’s from Columbia in 1936 and moved to teaching history at Newark’s prestigious Weequahic High School. He got a Columbia doctorate in 1948, was made department chairman, and in 1961, became assistant superintendent for secondary schools in Newark, responsible for nine high schools and six junior highs.
Meanwhile, he was writing four books: “Walter Lippmann: A Study in Personal Journalism”

Before coming to Ridgefield, he received a Ford Foundation grant for study in Europe, concentrating on political systems and the rising tide of communism in Italy.
In 1975,  Dr. Weingast spent a month visiting Russia, Switzerland and England as one of 25 school superintendents on a trip sponsored by the American Association of School Administrators. He admired the rigor, though not necessarily the approach, of the Russian schools.
“The program is academically strong, the spirit competitive,” he wrote  after returning. “Academic offerings in the secondary school are compulsory and there are no electives. The Russians would, I think, be bewildered by our system of electives and of our effort to fit a program to every child.”
He retired here when he reached 65, and became a consultant on education, working out of his Main Street home. Like his wife, Bea, he was an active citizen, participated in Rotary and other organizations,  but seemed content to remain on sidelines of Ridgefield politics.
Occasionally he wrote letters to The Press on issues that interested him — opposing condominiums on north Main Street, supporting expansion of the library.  In 1981, with characteristic thoughtfulness, he opposed a zoning variance to allow an expansion of hotel uses on West Lane.
“The people who ask for exceptions to the zoning rules mean Ridgefield no harm,” he wrote. “But each applicant wants what he wants. The sum of their wants is more cars, more blacktop, more congestion, more noise, more dirt, more pollution... Beautiful towns don’t decline overnight; they surrender, one building at a time.”
In retirement he had been researching and writing a new book, “The President’s Choice: The Story of the Presidential Cabinet,” but the book had not been completed when Weingast died in 2007 at the age of 94.
His longtime home on Main Street is now the residence of First Selectman and Mrs. Rudy Marconi.
Over his tenure here, his employer, the school board, had caused Weingast much aggravation — at one point the board even voted to fire him, then changed its mind and gave him a new contract.
When Weingast retired, he was asked if he might ever run for a seat on the school board.
He laughed loudly.
“Never!” he said. “I couldn’t be dragooned or seduced or bought!”