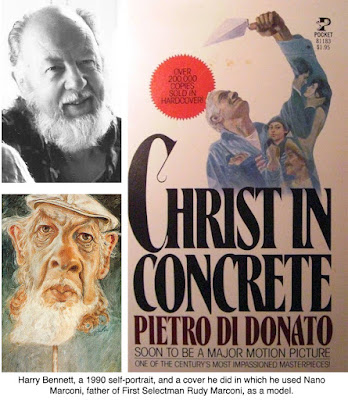 Harry Bennett:
Artist of A Thousand Covers
Literally millions of people have seen hundreds of paintings by Harry Bennett, but few would know his name. Mr. Bennett, a Ridgefielder most of his life, was one of the most prolific paperback book cover artists in the United States and probably the leading painter of covers for Gothic novels — more than 800 of them during a 17-year period from 1965 to 1982 alone.
“The Gothic presents a black and white world,” Mr. Bennett once told an interviewer. “There are the innocents, the dashing and the vulgar. A problem arises and is solved, good over evil — it’s as simple as that. But along the way, there is excitement, mystery, romance.”
And all three qualities are seen in his covers, which have graced the  works of such authors as Mary Stewart, Phyllis A. Whitney, Anya Seton, Susan Howatch, Jude Devereaux, and Martha Albrand.
Harry R. Bennett was born in nearby South Salem in 1919. His father, a Ridgefield native with deep roots in the town, had died a few months earlier in the 1918 influenza epidemic.
Harry Bennett came to Ridgefield when he was a year old, grew up on Gilbert Street, and was captain of the Ridgefield High School basketball team that reached the semifinals of the state championship in 1937. He was also president of the Class of 1937 at RHS.
During World War II, he was a major in the U.S. Army in the Pacific, and painted many of the battle scenes he saw. He also suffered a broken back in the war. Major Bennett earned a Bronze Star for his participating in the 1944 Battle of Hollandia, in which General Douglas MacArthur’s forces cut off the entire Japanese 18th Army in New Guinea.
After the war, he married Margaret Shean of Ridgefield. She encouraged him to attend art school and to follow his passion for painting.  He studied fine arts at the Institute of Chicago, and graphics at the American Academy of Art, also in Chicago, and began doing advertising art for Pepsi, Buick, and other national accounts in the 1940s.
In the late 50s, he switched to books, and began creating covers for Ross MacDonald mysteries and in 1961, Gothics — his first, for Mary Stewart’s “Thunder on the Right.” By 1972, Gothic novels represented 25% of all paperback sales nationally, and hundreds of titles — some selling 15 million copies — bore Bennett covers.
In all, he painting more than 1,000 book covers during his career, often using Ridgefield friends and neighbors for models in the pictures.
Some of his book work was far more sophisticated than Gothics. The New York Society of Illustrators awarded him a bronze medal for the ink paintings he created to illustrate a boxed collectors’ edition of Dante’s “Divine Comedy,” published in 1966.
Mr. Bennett lived and painted for many years at the corner of Main and Pound Streets — a Victorian home that’s been turned into condominiums called “Bennett House.”


Around 1982, he moved west and painted expressionistic works from a studio overlooking the Columbia River in Astoria, Ore. He later moved to Maryland to be closer to his family, and died in 2012 at the VA Medical Center in Baltimore.  He was 93 years old.