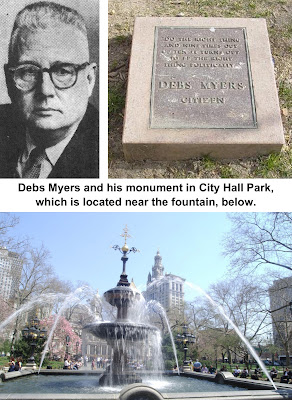 Debs Myers:
Puckish Persuader
In his obituary, The New York Times called Debs Myers “a puckish former newspaperman who became an adviser to nationally prominent political figures.” It added that he was also “a chain smoker of cheap cigars, whose rumpled suits never seemed to fit his football-shaped body.”
Perhaps it’s no wonder Myers tried his hardest to stay out of the limelight. But he had another explanation.
“In government,” he said, “most of the so-called hidden persuaders would do better to remain hidden.”
As an adviser to New York City mayor Robert F. Wagner,  U.S. Senator Robert F. Kennedy, and presidential candidate Adlai E. Stevenson, he believed that, “in a political campaign, the most important thing is the ability to turn lemons into lemonade — to make a potentially damaging issue work for you, not against you.”
Born in 1911 in Kansas, Eugene Victor Debs Myers was named for the Socialist leader who ran for president five times and who was friend of his father. He maintained that he dropped out of school after junior high and at the age of 15, went to work in the sports department of The Wichita Eagle, later becoming its city editor and then Oklahoma bureau chief for United Press International.
During World War II, he served briefly in the regular Army — “I may have been the most inept soldier in the Army,” he said. “It was the about-face that did me in. I had lost a lot of weight and my pants kept falling off.”
Instead of sending him to fight, the Army transferred him to the staff of “Yank,” the Army’s magazine, where he wrote many feature stories. He later edited a book, “Yank: The G.I. Story of the War.”
After his discharge he became managing editor of Newsweek and was soon working for Adlai Stevenson, writing many of his campaign speeches. After Stevenson’s second unsuccessful run for president, Myers quipped: “I will never again work for a candidate who is short and plays tennis.”
He was more successful with Bobby Kennedy, masterminding many aspects of the campaign that got him elected U.S. senator from New York.
In the 1960s, he served as Robert Wagner’s executive secretary, heading what The Times called the mayor’s “personal brain trust.” He was credited with helping keep Wagner popular with the people of New York City.
After leaving the political world in the mid-1960s, Myers founded a public relations firm called Infoplan International, based in New York.
He and his wife, Nellie, lived on Fulling Mill Lane from 1967 to 1969 when they moved to Bethel. He died there two years later of cancer; he was only 59.
In City Hall Park in Manhattan, within view of the window of the office where he worked under Wagner, a monument to Debs Myers stands next to a dogwood tree, also placed there in his honor. The monument bears one of Myers’ most often quoted observations: “Do the right thing, and nine times out of 10, it turns out to be the right thing politically.”


The monument, near the park’s famous fountain, is directly across Broadway from the Woolworth Building, the skyscraper designed by Cass Gilbert of Ridgefield.