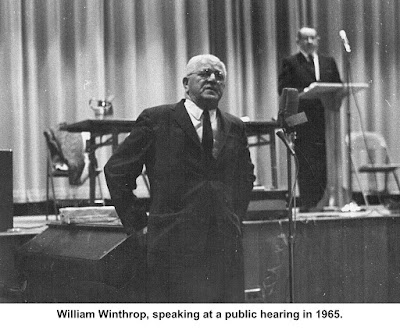 William Winthrop:
Mr. Ridgefield Lakes
William “Willie” Winthrop was one of the most influential  — and colorful — characters in 20th Century Ridgefield. Responsible for the town’s largest development, he frequently clashed with town officials and even ran into problems with the law.
In 1932, Winthrop came to Ridgefield and within 10 minutes of seeing the Fox Hill Lakes, a large subdivision planned around several man-made lakes, he placed a deposit on the development which he renamed “Ridgefield Lakes.” He then spent the next four decades developing the region, involved in the building of more than 325 houses and creating lots for even more.
Many of the houses were constructed as summer cottages, but virtually all have since become year-round homes.
He envisioned The Ridgefield Lakes as “a true haven for people who wanted a home they could afford and a haven for a potential area for their retirement years.”
A native of Minneapolis, William Lawrence Winthrop was born in 1895 and served as a gunnery sergeant with an aviation unit of the U.S. Marine Corps during World War I. He became an attorney, but he did not practice law in Ridgefield.
When he came to town, Ridgefield had neither zoning nor planning. “I hired an engineer and surveyor to plan and lay out this property,” he said in 1966. “Unlike so-called ‘planners,’ I knew this 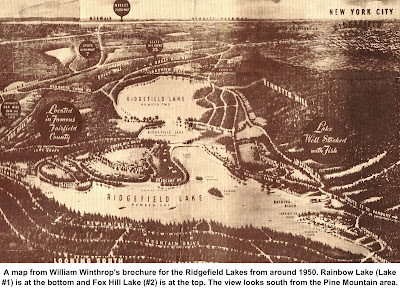 could not be done in three weeks. I did get a plan suitable to my dream for this place in two years and I changed it repeated to achieve a real plan which would not only be suitable for homes but provide for the comfort and recreation of those who chose to build a home there.”

Winthrop maintained that “long before the alleged planners and zoners dreamed up the open space and recreation areas of which they prate, I dedicated by use and deed more than 125 acres of lakes and another 30 acres for open spaces.”
Especially after zoning arrived in 1946, he maintained running battles with the town. He fought zoning and planning officials, complaining that their rules were keeping the little people out of Ridgefield and making it more difficult for the poor to find homes.
When planning — which included the control of the design of subdivisions — was proposed in the 1950s, he said it was “an expression of extreme snobbery, and is designed to eliminate ... the men in overalls.”
He doggedly opposed most of the town’s school building projects, calling them extravagant.
Conflicts between Winthrop and town officials were sometimes quite public and often colorful such as at a Planning and Zoning Commission public hearing on a Winthrop proposal, at which he fought with commission Chairman Daniel M. McKeon over when he could speak.
“Mr. Winthrop, you’re out of order,” said McKeon. “Take your seat.”
“What?!” replied Winthrop.
“Take your seat!” McKeon repeated.
“What was that?” Winthrop asked.
“Please sit down!” demanded McKeon.
“Why?” asked Winthrop.
“Please sit down!” McKeon said again.
Winthrop turned to the audience and declared, “He robs me of a half a million dollars and wants me to sit down!”
Then he turned to McKeon and added, “You never had to work for yours.”
A by-now irate McKeon shouted: “You’re out of order — sit down!”
Ambling to his seat, Winthrop turned toward McKeon and said, “To hell with you!”
Coleman London, who was sitting in the audience, leaned over to Karl Nash, who was covering the meeting for The Ridgefield Press, and said, “THAT was worth the price of admission.”
Winthrop was more liberal in his views on national and international affairs, however, and, 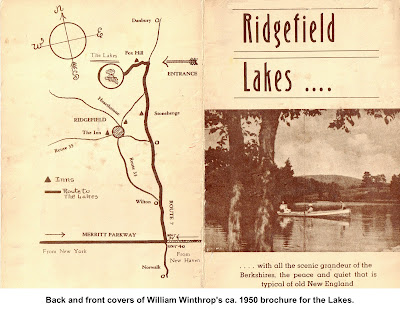 though he was a Republican, he was an admirer of Presidents Roosevelt, Truman and Kennedy. Among his interests were American Indians, and he once proposed a national holiday honoring them.

He also had some run-ins with authorities. He was arrested in 1937 and 1952 for writing fraudulent checks, and was brought to court by the town for zoning violations. In 1967, he was charged with drunken driving after his car on Danbury Road turned  toward Limestone Road, and into the path of an oncoming police cruiser, sending the officer to the hospital.
He died in 1971 at the age of 75.
Winthrop’s wife was Frances Ney Winthrop, a graduate of the Chicago School of Ballet, who was a dancer in several Broadway shows. They included the 1920 and 1921 versions of the revue, “George White’s Scandals,” with music by George Gershwin, as well as William B. Friedlander’s “Frivolities of 1920.” She died in 1982 at the age of 84 and is buried alongside her husband at Fairlawn Cemetery.