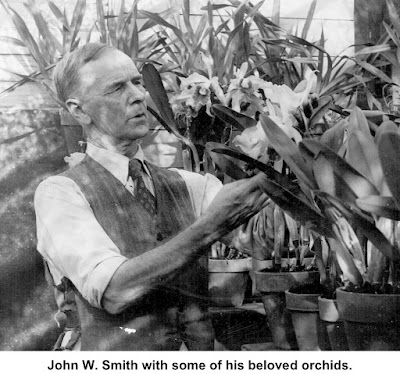 John W. Smith:
The Orchid Man
The many estates that were established around the turn of the 20th Century brought   hundreds of workers to Ridgefield — maids, cooks, butlers, chauffeurs, farmers,  groundskeepers, gardeners, and others. Many found Ridgefield to their liking, wound up settling here and became strong participants in the community.
One of those was Jack Smith, an estate superintendent who was among the best gardeners and also among the most active contributors to his town. His orchids won many national awards and Smith himself was involved in several national horticultural organizations.
A native of England, John W. Smith was born in 1883 in Harrogate. He came to this country in 1910 to work as a gardener at Upagenstit, the West Lane estate of Frederic E. Lewis. After a stint aboard a destroyer in the U.S. Navy during World War I, he returned to Upagenstit and became its superintendent.
It was at the Lewis estate that Smith developed an interest in orchids. Mr. and Mrs. Lewis’s vast greenhouses provided plenty of space for experimenting with a variety of species, and his specialty became the cymbidium.
Town Historian Richard E. Venus said the Upagenstit greenhouses “would match the conservatory in New York’s Botanical Gardens.” He reported that “it was said that John W. Smith…was the one who discovered the secret of growing orchids in this country. Jack isolated the orchid 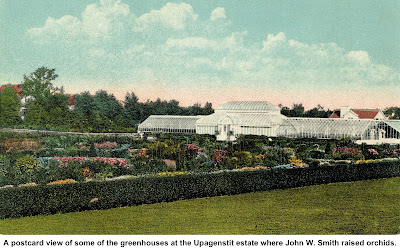 plants in a corner of the greenhouse where the humidity was high. Then, instead of just applying water directly to the plants, he sprayed the water into the air around the plants and let them soak it up….That fine greenhouse produced some of the most beautiful orchids ever grown.”

Smith’s orchids won many awards at the National Flower Show in New York. He was especially known for a variety called Cymbidium Lewis.
As Smith’s reputation became national, he was asked to judge flower shows all over the United States. He was named to the Hortus Committee of the 1939 New York World’s Fair, helping supervise the planting of flower beds on the fair’s grounds.
He was president of the Ridgefield Horticultural Society, then a sizable and active organization, as well as a member of the New York Horticultural Society and the National Orchid Society.
When the Lewis estate was sold to Ely Culbertson (profiled in Who Was Who), Smith moved his orchids to Pinchbeck’s Nurseries for a while until he built a special greenhouse at his Barry Avenue home to house them.
He became superintendent for the estate of Wadsworth R. Lewis, Frederic’s son, on Great Hill Road (later the home of Henry and Clare Boothe Luce).
Smith was involved in the political and civic side of Ridgefield life. In 1947 and 1949, he ran for first selectman on the Republican ticket, but lost to his friend, Harry E. Hull, a Democrat. He did win a seat on the Board of Selectmen from 1949 to 1951.
He was a member of the School Building Committee that built the 1939 addition to the old high school on East Ridge — an addition that included the auditorium that is now the Ridgefield Playhouse. He was an original member of the Park Commission, now the Parks and Recreation Commission, serving for 16 years.
When the town bought the Ridgefield Community Center just after World War II, Smith spearheaded the drive for public support and he personally supervised the remodeling of the Lounsbury house. He later became president of the Community Center.
He was also active in the Rotary Club, the Masons, and the First Congregational Church where, at the alleys in the church’s clubhouse, he enjoyed bowling with the locals.
He died in 1959 at the age of 75.