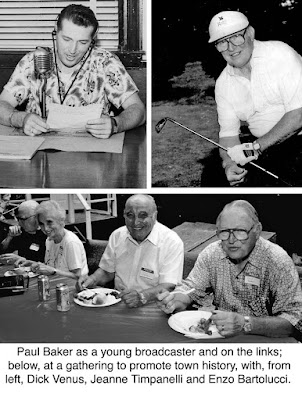 Paul Baker:
Multi-media Man of Words
Paul Baker was a remarkably versatile man of many media. He was best known as a radio broadcaster but was also a local TV personality as well as the voice of the Danbury Racearena, the stock-car track at the old Danbury Fairgrounds (now the mall).
His deep, rich voice was readily recognized, whether it was coming out of a radio, a TV set, or a public address system.
Born Paul V. Baldaserini in 1920 in Ridgefield, he grew up in town and graduated from Ridgefield High School in 1937 at the age of 16.
His distinctive voice was probably a factor in his entering radio, but his career began with a different kind of broadcasting. Mr. Baker was an air traffic controller in the U.S. Army Air Corps during World War II, and later, in the Korean War.
While stationed at an air base in Belim, Brazil, during World War II, he met a fellow airman who’d been a well-known West Coast radio announcer, and who was working at the Armed Forces Radio Service station in Belim. (AFRS provided news and entertainment to American troops.)
Recognizing Baker’s potential on-the-air talent, the friend invited him to do shows at the AFRS station in his spare time.
After  Baker returned to civilian life, he decided he wanted to write. He approached Ridgefield Press publisher Karl Nash in 1947 and got a job as a reporter.
However, his AFRS experiences in Brazil had sparked a fascination with radio so that when an opening occurred at WLAD in Danbury, he grabbed it.
His military experience also inspired his “new” name. When he arrived at WLAD, “the program director asked me what name I was going to use on the air — since I was going on in about five minutes,” he said in an interview. “Since I had dealt with code in the service — it was A-Able, B-Baker, etc. — I said I’d use Baker for now.” And it was Baker ever after.
He was both a newsman and an announcer, and for many years his morning show was probably the most listened to radio program in the Danbury area.
In 1977, he and Abe Najamy took over local cable TV Channel 10, and among other things, produced the only local TV news show ever devoted to this area.
Among the people who got their start in TV during the Baker years at Channel 10 were Ridgefielder Chip Dean, now an ESPN director, and Paul’s own son, Joe, another director at ESPN.
After leaving WLAD, Baker had a weekly interview show on WREF in Ridgefield.
Baker, who had lived in Southbury for many years, served as toastmaster for many area functions, mostly charitable in nature, and was a member of many clubs and organizations. He had a 24-year association with the Southern New York Racing Association — on countless Saturdays in summer, he was the announcer at the stock car races at the Danbury Fair grounds, now the Danbury Fair Mall.
A longtime sports enthusiast, he was a founding member of the Danbury and Ridgefield Old Timers Associations. As a golfer, he carded four holes-in-one — his last at the age of 90.
But for all his vocal and athletic talents, Paul Baker never forgot his first love — writing. Late in life, he produced four books, as well as countless newspaper columns, all focusing on a local history and personalities of the past.
“I would rather write  ... than do all the broadcasting in the world,” he said in 1999.
He died in 2014 at the age of 94.