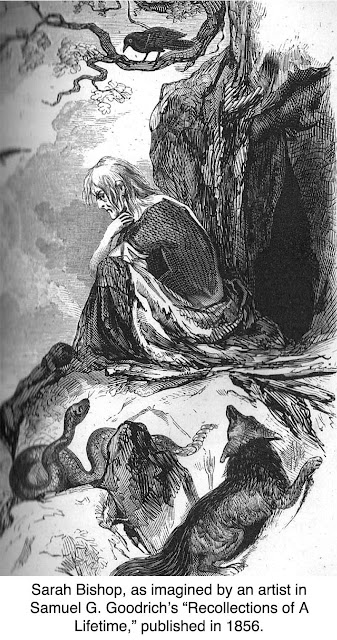 Sarah Bishop:
The Hermitess on the Mountain
Ridgefield has had not only a hermit, but also a hermitess—though, officially, she was a New Yorker. Sarah Bishop lived in a tiny cave in the side of West Mountain in Lewisboro, N.Y., just across the Ridgefield line westward of Oreneca Road and Sturges Park.
She arrived during the Revolutionary War, but no one knows why. Several legends explain her appearance. One said she was in love with a sea captain who deserted her. Another maintained that shortly before her wedding day, British troops invaded her Long Island home and a Redcoat raped her. Full of shame or sorrow, she ran away to this cave from which, on a clear day, she could see Long Island and the place where she spent her girlhood days.
Sarah Bishop lived on gifts of food, on wild plants, and on a small garden she kept near her cave, which was little more than a hollow in some rocks.
A reporter who visited her in 1804 said a few peach trees, as well as beans, cucumbers and potatoes grew in a nearby clearing. There were also said to be many grape vines nearby.
She also got some necessities from kind-hearted people on West Mountain and in Ridgefield and South Salem, whose villages she periodically visited.
A religious woman, Sarah Bishop sometimes attended services at the First Congregational Church here or the Presbyterian Church in South Salem. At the home of Jared Hoyt in South Salem, she kept some fancy dresses from her youth. She would come down from the mountain, dress at his house, attend church, and return to the house to change back into her “rags.”
One of the places she visited in Ridgefield village was the home of the Rev. Samuel G. Goodrich, minister of the First Congregational Church. The house still stands on High Ridge at the head of Parley Lane. His son, author S. G. Goodrich (whose pen name was Peter Parley), remembered as a boy seeing her. “This strange woman was no mere amateur recluse. The rock—bare and desolate—was actually her home, except that occasionally she strayed to the neighboring 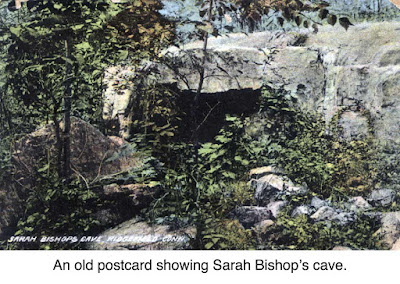 villages, seldom being absent more than one or two days at a time. She never begged, but received such articles as were given to her.

“She was of a highly religious turn of mind, and at long intervals came to our church and partook of the sacrament. She sometimes visited our family—the only one thus favored in town—and occasionally remained over night. She never would eat with us at the table, nor engage in general conversation.
“Upon her early history she was invariably silent; indeed, she spoke of her affairs with great reluctance. She neither seemed to have sympathy for others, nor ask it in return. If there was any exception, it was only in respect to the religious exercises of the family; she listened intently to the reading of the Bible and joined with apparent devotion in the morning and evening prayer.”
Goodrich added, “I have very often seen this eccentric personage stealing into church, or moving along the street, or wending her way through land and footpath up to her mountain home. She always appeared desirous of escaping notice, and though her step was active, she had a gliding movement, which seemed to ally her to the spirit world.”
Sarah Bishop died in 1810. According to George L. Rockwell, “the generally accepted story is that one stormy night, she left the house of one of the neighbors, who lived on the corner of the road leading up to the mountain. Wending her way up the steep mountainside to her cave, she fell, and too weak to continue her way, perished from the cold. She was found among the rocks a short distance from her cave.” She was buried in an unmarked grave in North Salem.
In 1908, Dr. Maurice Enright, a physician who maintained a summer place here, wrote a novel, “The Ridgefield Tavern, A Romance of Sarah Bishop, Hermitess, During the American Revolution.” The book cast Sarah Bishop as the daughter of the operator of the Keeler Tavern (“Ridgefield Tavern”), a photograph of which appears in the book. The account is, of course, fictional.
Goodrich turned to poetry to capture the color of the old hermitess, publishing the following in 1823 under his pen name of Peter Parley, in a Hartford newspaper. It’s a great piece to read aloud on Halloween night.

For many a year the mountain hag
Was a theme of village wonder,
For she made her home on the dizzy crag
where the eagle bore its plunder.
Up the beetling cliff she was seen at night
Like a ghost to glide away;
But she came again with the morning light
From the forest wild and gray.
Her face was wrinkled, and passionless seem’d,
As her bosom—all blasted and dead —
And her colorless eye like an icicle gleam’d,
Yet no sorrow or sympathy shed.
Her long snowy locks, as the winter drift,
On the wind were backward cast;
And her shrivel’d form glided by so swift,
You had said ‘Twere a ghost that pass’d.
Her house was a cave in a giddy rock
That o’erhung a lonesome vale;
And ‘twas deeply scarr’d by the lightning’s shock
And swept by vengeful gale.
As alone on the cliff she musingly sate —
The fox at her fingers would snap;
The crow would sit on her snow-white pate,
And the rattlesnake coil in her lap.
The night-hawk look’d down with a welcome eye
As he stoop’d in his airy swing;
And the haughty eagle hover’d so nigh
As to fan her long locks with his wing.
But when winter roll’d dark his sullen wave
From the west with gusty shock,
Old Sarah, deserted, crept cold to her cave
And slept without bed in her rock.
No fire illumined her dismal den,
Yet a tatter’d Bible she read;
For she saw in the dark with a wizard ken,
And talk’d with the troubled dead.
And often she mutter’d a foreign name,
With curses too fearful to tell,
And a tale of horror—of madness and shame —


She told to the walls of her cell!