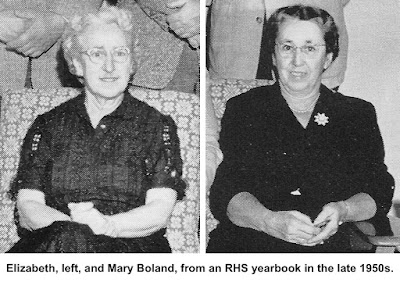 Elizabeth and Mary Boland:
The Teaching Sisters
For two generations of young Ridgefielders, the name of Boland was impossible not to know. Between the sisters Mary and Elizabeth, they taught virtually every child who went through the school system.
Their subjects were the opposites of what their given names might suggest: math for Elizabeth and English for Mary.
Together they worked 93 years in the Ridgefield schools.
Westport natives, the Boland sisters came to Ridgefield as young children, living in a house on 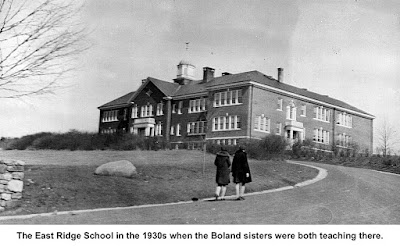 West Lane that had been the first state police barracks in Ridgefield. They attended local schools,  graduated from Danbury Normal School (now WestConn), got master’s degrees at Columbia, and started teaching in 1919.

Mary, who was known as May, was born in 1898. She began teaching at the Center School, then went to the one-room West Mountain School, and from 1929 until her retirement in 1964, taught at the junior and senior high school.
Elizabeth, born in 1899, began at Titicus School, then Center School. In 1947, she moved to the high school and taught math there and at the junior high until her retirement 30 years later.
“Bess” Boland taught for 48 years, three more than Mary.
Both moved to Fairfield where they died, Mary in 1986 at the age of 87, and Elizabeth in 1990, aged 91.
When they began teaching, their salaries were $1,000 a year. When they left, it was only $10,000.