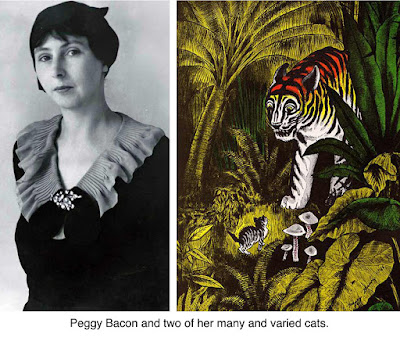 Peggy Bacon:
Artist of Pictures and Words
Peggy Bacon was an accomplished artist in both words and pictures, an illustrator, painter, and printmaker, as well as a writer of books for both children and adults, including an acclaimed mystery.
Margaret Frances “Peggy” Bacon was born on southern Main Street in 1895, the daughter of artist parents, Charles Roswell Bacon and Elizabeth Chase Bacon, who had met while attending the Art Students League in New York. Her parents never had much money; at the time of Peggy’s birth, her mother was managing the Ridgefield Inn on the east side of Main Street, just north of Wilton Roads East and West. (Her father, who committed suicide when Peggy was a teenager, is buried in Ridgefield Cemetery.)
She grew up in Ridgefield, New York, the Bahamas, and France, and was largely taught by her parents and by tutors.
“I had the most charming and amusing parents,” she said in a 1973 interview. “We led a very close life together. There was a great deal of reading aloud. They were both very well read.”
Her first formal schooling came with the help of two Ridgefield women. “There were some 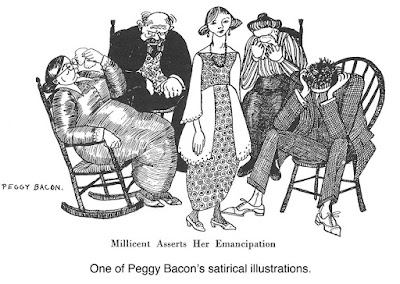 rich friends of my parents who decided that Peggy really should have some solid education,” she recalled. “Also, they thought I should have some young life. I lived entirely with my parents and many of their intimate friends had no children … I really had very little companionship.

“And so the Misses Stone, who were childless — these two sisters in Ridgefield, Connecticut, who were wealthy, took a great interest in me. One of them, Miss Annie Stone, was an amateur painter. She thought I was talented. I had always drawn. So they put me up, so to speak, to boarding school, Kent Place School in Summit, New Jersey.
“And I loved it. Everybody thought I'd have an awful time because I led such a queer life. But I think I was very fortunate in my classmates. They were mostly Summit girls of a rather liberal point of view toward this oddity in their midst.”
After graduating from the Kent Place School, she studied at the Art Students League where she later also taught.
In the 1920s and 30s, she did illustrations for many magazines, including The New Yorker, 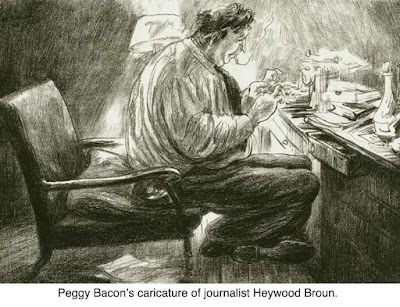 Vanity Fair, and Fortune. She was famous for her witty caricatures of celebrities, and her satirical illustrations of contemporary society.

However, she was also well known for her books. In 1919, when she was only 24, she wrote and illustrated her first, “The True Philosopher and Other Cat Tales,”  and went on to write or illustrate more than 60 titles.
Many of her own books were light-hearted works aimed at children, and included cats in their stories. Titles included “Lion-Hearted Kitten,” “Mercy and the Mouse,”“Starting from Scratch,” “The Terrible Nuisance,” “Animosities,” and the “Good American Witch.” A collection of her satirical illustrations, “Off with Their Heads,” was aimed at adults.
Her work was widely recognized. She won a Guggenheim Fellowship in 1933. In 1980 she received the American Academy and Institute of Arts and Letters’ Gold Medal for “her long and impressive career as a graphic artist and illustrator.”
Bacon also wrote serious fiction; her 1952 mystery novel, “The Inward Eye,”  was nominated for an Edgar Award for best mystery novel of the year.
She also painted serious art.
Her drawings and paintings are in the collections of the Metropolitan Museum of Art in New York, the National Gallery of Art in Washington, and many other museums.
Bacon had married American artist Alexander Brook in 1920 and had two children. They divorced 20 years later.
She died in 1987 in Maine at the age of 91.