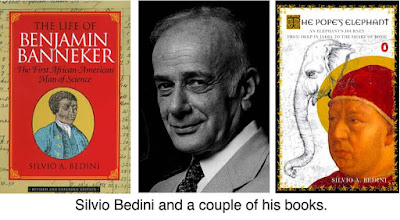 Silvio Bedini:
Ridgefield’s Reviewer
How did a veteran of Army intelligence who had been writing for comic books and helping run the family contracting business wind up a Smithsonian Institution curator and author of many volumes of history?
“One day, I bought a clock, the first clock I had ever owned in my life,” Silvio A. Bedini told me in 1989. It was no ordinary clock, however. Uncovered in a  crate filled with mouse nests in North Salem, N.Y., the timepiece turned out to be a priceless “Silent Night Clock,” with a quiet mechanism invented in 1656 for Pope Alexander VII “because he was an insomniac.”
That North Salem antique inspired him to study and write about ancient clockmakers. His reputation as a specialist in the field became so widespread that the Smithsonian wooed him for five years before, in 1961, Mr. Bedini went to Washington to become a curator. “From the first day I was there, I felt that’s where I should have been all my life,” he said.
Mr. Bedini’s interest in history started much earlier than the clock purchase, however. He was born in 1917 on North Salem Road and as a boy, he would walk to town along that road, wondering at the historical markers along the way (it was the route of the Battle of Ridgefield). His real awakening came when a librarian allowed him to visit the dank, dusty historical room in the Ridgefield Library basement where, among other things, he could view—but not touch—the sword of Sgt. Jeremiah Keeler, presented to him by the Marquis de Lafayette for heroic service in the Revolution. “It was a special treat to be allowed into the library’s ‘Holy of Holies,’ even under the librarian’s watchful eye,” he said. “I never forgot what I had seen and could recall details of the weapon for years to come. I doubt that many Ridgefielders were even aware of the room’s existence.”
During World War II, he left college to volunteer for the Army Air Corps, but wound up in G-2 intelligence at Fort Hunt, Va., a facility so secret it was blown up as the war ended. After his discharge, he returned to the family business, wrote for children’s magazines and comic books, and did freelance research for the Encyclopedia Americana and The Book of Knowledge.
In 1958, he was asked to write a ‘brochure’ about the history of Ridgefield for the town’s 250th anniversary. In only three months under his extensive, painstaking research, the brochure turned into Ridgefield in Review, 411 pages long and the only modern history of the town. After joining the Smithsonian, his talent for careful research and his interest in the “little men” of early science led to write some 20 books of history dealing mostly with such subjects as clockmakers, navigators, mapmakers, surveyors, and “tinkers,” but including a Renaissance pope and his elephant. He won many awards for his work including, in 2000, the Leonardo da Vinci Medal, “the highest recognition from the Society of the History of Technology.”
Though he retired in 1987 as deputy director of Smithsonian’s National Museum of American History, Mr. Bedini continued to research and write books, uncovering new information on old subjects. “This is what I enjoy most,” he said, “the historical detective work.”
He died in 2007 at the age of 90.