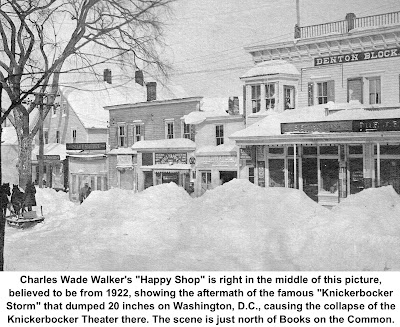 Charles Wade Walker:
Happy, Musical & Armed
Music was Charles Wade Walker’s first love and primary profession, but this prominent, many-faceted Ridgefielder also ran a magical Main Street store that entertained a generation of kids and adults. So Walker doesn’t seem quite like the kind of fellow who’d be a pistol-packing leader of a posse, and perhaps he should not have been.
Born in 1880, the Albany, N.Y., native came here in 1910 after having been an organist in several New York City churches. Over the years he was music supervisor for the schools, a tenor in the Ridgefield Male Quartet, organist and choirmaster at the Jesse Lee Methodist Church, a piano tuner, conductor of the St. Cecile Choral Society, and a trumpet player in the Ridgefield Band.
For many years he operated Walker’s Happy Shop on Main Street, a popular newspaper and novelty store. The sign in the front said, “Toys to make the kiddies happy, sweets to make the ladies happy, and smokes to make the men happy.”
In 1917, when he installed a soda fountain, he put up a window shade with the sign, “Meet me here at the fountain.”
Walker was also a justice of the peace and town constable, long before Ridgefield had its own formal police department. It was, perhaps,  a job for which the musician and merchant was not always well suited, as evidenced by the story told by Town Historian Richard E. Venus in a 1987 “Dick’s Dispatch” column in The Ridgefield Press.
It was in mid-winter one evening in the 1930s when Irene Zwierlein heard a noise in the 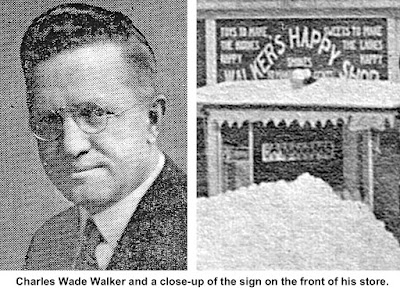 basement of her Barry Avenue home. Her husband, Joe, was attending a meeting in town, and she was alone in the house. “She opened the kitchen door that led to the basement and there, in the darkness, was the outline of a man,” wrote Venus. “The man hurled a rubber boot at Irene and then fled out the back door of the basement.

“Irene quickly recovered and soon had the police, in the person of Charles Wade Walker, on the scene. Word spread quickly through the neighborhood and soon a posse of neighbors was organized. It was led by a very nervous, part-time policeman.
“The trail of the intruder was easy to follow as there was a light, freshly fallen snow….The tracks led north through the fields to Ramapoo Road and an old hay barn that had a ground floor basement. The barn was part of Irving Conklin’s dairy farm and while the upper part of the barn was used to store hay, the basement sheltered a dozen young heifers that Irving used to winter there.
“The basement doors were always left open, in order that the herd of heifers would have easy access to the tiny pond where they got their water. The tracks of the culprit led directly to the open barn door.
“At this point, a decision had to be made: Do you barge into the barn or do you wait for the quarry to come out? Perhaps this is a good time to explain that the officer carried a gun, but, as he said later, he was terrified at the thought of ever having to use it. In fact, he said that he had never used it, even in practice.
“By now the posse had grown to a considerable size and they wanted some action. The man had managed to enter the barn without disturbing the heifers and they remained quietly in their shelter.
“However, at the approach of this small army, led by Charles Wade, a distinct rumble could be heard. Just as they reached the door, the herd, probably encouraged by the man, stampeded out the barn. Several people were knocked flat, including the officer, whose gun went off harmlessly into the air.
“The heifers raced across the open field, with the perpetrator keeping pace in their midst. He sure could run and with all the tracks made by the crowd, it was impossible to follow him.
“Several people thought they knew who he was, but positive identification could not be made and he got away scot-free.”
Walker may not have like toting a gun, but he was probably more knowledgeable than most about the law; before he came Ridgefield, he had studied law in New York City. His knowledge was put to use as a prosecutor in the town Justice Court. He was also a village traffic officer from 1938 to 1951,  and a volunteer fireman. And if that wasn’t enough, he belonged to the Masons, Odd Fellows, Lions, and the Grange — and contributed poetry to The Press.


He continued to live in Ridgefield until about a year before his death in a Hartford nursing home in 1961 on the eve of his 81st birthday.