S.D. Keeler:
The Major Merchant
If he were around today, S.D. Keeler might have become a modern Sam Walton. Or at least a Carl Bennett.

Walton founded Walmart, Bennett started Caldor (remember Caldor?), and Keeler at one time had three retail stores in various parts of town plus other retail operations. The Ridgefield Press observed in 1950, “His business enterprises began with a small grocery stand in the village and mushroomed into perhaps the biggest single business of its character in the town’s history.”
During one year early in the 20th Century, his local enterprises had a gross income of more than a half million dollars — close to $15 million today.
Not bad for a merchant in a small town of around 3,100 people.
Samuel Dauchy Keeler was born in Ridgefield in 1852, and grew up in town. He was known as S.D. while Samuel Keeler, a prominent attorney, was often referred to as “Lawyer Sam” — not to his face — to avoid confusion between the two.
His career began in 1884 when he opened a small grocery stand in the village. It grew into the first up-to-date market in town, open nightly till 9 and until 11 Saturdays.
The store was located in the space today occupied by Deborah Ann’s Sweet Shoppe. In the sidewalk out front, he had embedded into the concrete his initials, S.D.K., in brass letters that were around two by two feet in surface size — one set facing each direction. They may  still be there today, covered over by today’s brick surface.
In the 1890s, the store was selling not only groceries, but a wide variety of  “general 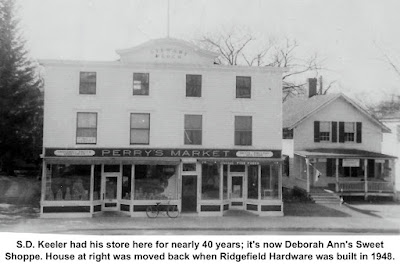 In 1901, Keeler built the first cold-storage warehouse in town – a predecessor of the modern freezer. Outside the village he eventually owned the Titicus Store at North Salem and Mapleshade Roads, and the Corner Store by the Fountain.
“Expressing admiration for Mr. Keeler’s aggressive business tactics,” one businessman once “declared that his delivery system was so good that he would even take a yeast cake over the dirt roads to a home up on West Mountain if anyone were bold enough to ask,”  The Press reported in 1950.
One of Keeler’s big sources of income was his grain and feed elevator on lower Bailey Avenue, much of which still stands. Town Historian Richard E. Venus described its operation in a 1983 “Dick’s Dispatch” column in The Ridgefield Press.
“At one time when farming played an important role in the daily life of Ridgefield, farmers brought in their wheat, oats, rye, corn, and barley. These grains were taken up in the elevator to the top floor where they were processed and mixed.
“Different ingredients were required in the diets prepared for horses, cows, sheep, hogs and 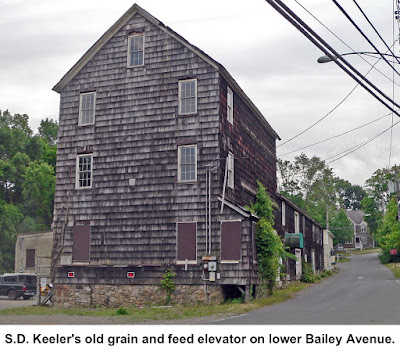 chickens. The proper amount of each of the grains for the diet of each of the farm animals was mixed and placed in large bins on the top floor. From each bin, a chute was extended to the ground floor. Through these shoots the mixed feed would filter to be bagged and sold back to the farmers who had previously sold some of the ingredients to Mr. Keeler.

“This whole operation was of great importance to Ridgefield’s economy and provided employment for a number of people.”
By 1921, Keeler had sold all his businesses. His village market was went to Walter Stewart Company of New Canaan, but soon became Perry’s Market and then Gristedes. (The building was purchased in 2000 by the Rabin family of next-door Ridgefield Hardware.)
Samuel D. Keeler died at his Branchville Road home in 1926 at the age of 73. Strangely, The Press at that time gave him only a terse, three-paragraph obituary, on an inside page. Typically, such a prominent person would have been on the front page, with a much longer tribute.


Around that time the newspaper was owned by Lawyer Sam. One wonders whether there was some sort of animosity between Ridgefield’s two prominent Samuel Keelers.