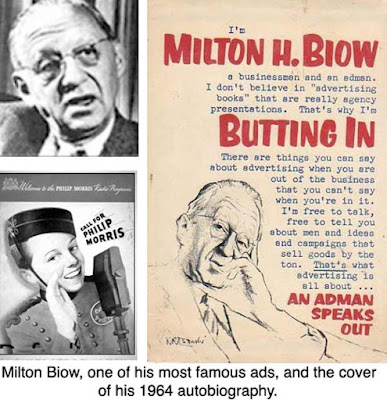 Milton Biow:
Modern Advertising Leader
What do the Mimosa subdivision, Philip Morris cigarettes, Lucille Ball, and box-top premiums have in common? Milton Biow.
A leader in modern-day advertising techniques, Mr. Biow rose from humble beginnings to operate one of the largest ad agencies, write now-classic ad copy, create radio and TV shows, and come up with the name of what is now a North Street neighborhood.
Milton Harry Biow (pronounced “be-o”) was born in 1892 in New York City. Although he barely graduated from grade school, he had set up his own advertising agency by the age of 25. The Biow Company grew to become one of the nation’s largest agencies, grossing at times hundreds of millions in today’s dollars.
He created such advertising slogans as “It’s Bulova Watch Time,” “Pepsi Cola Hits the Spot,” and “Call for Philip Morris.”  He is also said to have originated the idea of sending in cereal and other product box tops for premiums.
The New York Times once said that among the products “he made household names” were Anacin, Eversharp, Ruppert beer, Schenley whiskey, and Lady Esther cosmetics.
“We moved them by the ton,” he’d often say. “We are a tonnage agency.”
Although he promoted the sale of  many tobacco and alcohol products, Mr. Biow never smoked or drank himself.
Also involved in radio and TV, Mr. Biow created the “Take It Or Leave It” radio show which became the $64,000 Question on TV. He  also brought to television ”The Lucy-Desi Show,” starring Lucille Ball and Desi Arnaz.
He was credited with being an originator of the modern school of advertising and the first to use radio and TV “spot” commercials to saturate the national market, especially for watches.
“All watches offer time,” he once explained. “Bulova watches not only give the time, but provide beauty, a source of pride, an added measure of value to the user. It’s advertising which sells the plus difference.”
Although he shied away from publicity most of his life, Mr. Biow published an autobiography in 1964, called “Butting In: An Adman Speaks Out.” Promotional notes for the book said, “He never really cared much about money — and he made millions. He was not in politics — yet he ‘ghosted’ some of the smartest lines ever spoken by a president of the United States….He still doesn’t know an adverb from a preposition — but he has just written the gayest, wisest, frankest, most hell-raising book on advertising ever published.”
The president was Franklin D. Roosevelt who, according to one author, used “the catchy slogans that Milton Biow passed along for his speeches.”
Mr. Biow came to Ridgefield in 1952, buying as a weekend and summer retreat a 37-acre estate on North Street that had been called “Wood Acres.” He changed the name to “Mimosa” after planting trees of that species around the house. (Accustomed to warmer climates, the trees had died off by the 1960s.)
In 1964 he sold the estate to Ernestine Tuccio whose husband, Jerry, subdivided the property into Mimosa Estates.  (Mr. Tuccio at first wanted to call the main road into the development “Airline Circle” because so many airline pilots were buying his houses in the early 1960s.
The Planning Commission felt the name wasn’t an appropriate and Mimosa Circle was used instead.)
The estate house, painted “Mimosa yellow,” was retained and still stands.
In 1956, Mr. Biow closed his agency to devote himself to other interests, including his autobiography and work with the National Conference of Christians and Jews, of which he was a founder. He was also active in the United Jewish Appeal, the United Hospital Fund and the Muscular Dystrophy Association.
He died in 1976 in Manhattan at the age of 83.