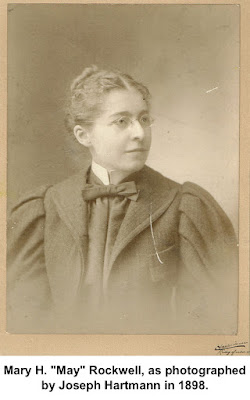 Mary “May” Rockwell:
A Hotel of Culture
A house with a lot of history was torn down in 2014, but little of its former glory was left by then. The large Victorian on Governor Street, which had long been an office building, was razed to make way for the new Ridgefield Visiting Nurse Association headquarters. It was a building that had led four lives in its two centuries, including several decades as the House of Friends.
The building originally stood on Main Street, in front of today’s Community Center, where it had been the home of the Perry family, which produced three prominent Ridgefield physicians. It then became the home of Gov. Phineas Lounsbury, who turned a colonial-style structure into a Victorian. When he decided to build a grander place, today’s Community Center, he moved his old house to Governor Street where it became the home of  Mr. and Mrs. John W. Rockwell and and their daughter, Mary. John, longtime owner of The Elms Inn, probably paid a modest price because the Rockwells and Lounsburys were relatives.
Mary Hester “May” Rockwell was born in 1874 and received an education that was well above the average schooling for a Ridgefield native of the era. In 1889, when she was only 15 years old, she was studying at Centenary Collegiate Institute, a Methodist-owned college preparatory 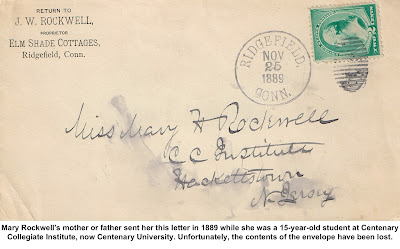 school in Hackettstown, N.J., that is now Centenary University.

In 1891, when she was 17, her parents sent her to Europe and she spent six months studying music in Berlin, Germany. She later also studied at Oberlin College.
“Miss Rockwell was a tall, stately woman whose life was clouded by poor eyesight,” wrote Karl S. Nash in 1980. “She was an albino with one-quarter of normal sight in one eye and none in the other.
“In the 1920’s when she was in her forties, she left the Methodist Church where she had grown up and embraced Christian Science. She threw away her thick-lensed glasses and never wore them again. In embracing the teachings of Mary Baker Eddy, she became more calm of spirit and more able to cope optimistically with her infirmity.”
Rockwell was an accomplished pianist who taught piano to hundreds of Ridgefield children over more than 30 years, at first with her cousin Faustina Hurlbutt. The Hurlbutt-Rockwell School of Music regularly gave public recitals at her home.
Her house became rather large for a single woman, so in the 1910s May Rockwell began 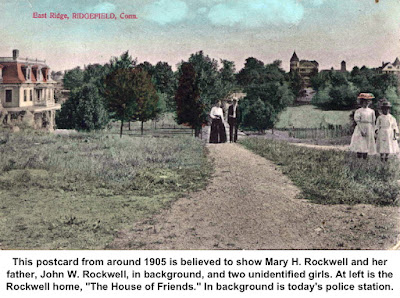 renting rooms in a boarding-house fashion. She didn’t rent to just anyone, however; she sought guests who were intellectually interesting as well as congenial, and she called the place the “House of Friends.”

Among those friends, best known was Mabel Cleves, her companion of more than 40 years (previously profiled in Who Was Who).  Columbia-educated and Montessori-trained,   Cleves began teaching here in 1898, and established not only the first kindergarten in town but also a public preschool.  She also founded the PTA in Ridgefield.
In late life, Miss Cleves bought an automobile and learned how to drive it. She would take Rockwell and other friends on fairly long rides around the countryside. “Sometimes Mary and Mabel would go wading at Compo Beach or Sherwood Island,” Nash said.
Besides long-term clientele, guests at the house included actors and actresses doing summer theater, and teachers and professors on summer break. The place had a “high cultural level,” The Ridgefield Press once reported.
At Oberlin, Rockwell had studied under Professor Charles K. Barry who later became a regular summer visitor at the House of Friends.
Among the more unusual guests there were Mr. and Mrs. William Picke. Mr. Picke was a tutor 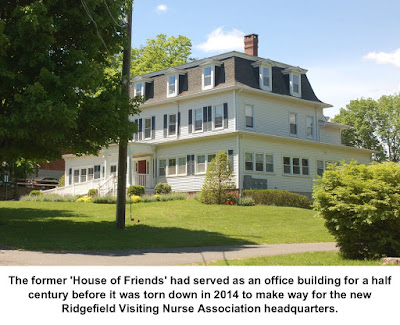 for the Doubleday family of Westmoreland. “He was a distinguished-looking man with a goatee and a British accent,” said Nash, who then recounted this widely told incident:  “At the silent movies in the town hall one Saturday night, Mr. Picke looked about and whispered to his wife — loud enough for somebody to hear— ‘Oh, my dear, we are the only ones of the upper class here.’”


Frail and infirm, Rockwell sold the house in 1947 and died two years later in a nursing home. Mabel Cleves died in 1952.