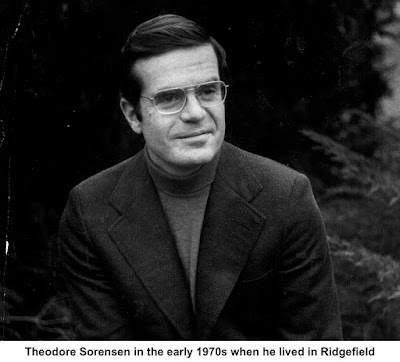 Theodore Sorensen:
The President’s Man
When President John F. Kennedy challenged the nation at his inauguration,  “Ask not what  your country can do for you, ask what you can do for your country,” he was relying on the wordsmithing of a young man named Theodore Sorensen.
Sorensen was not only a speechwriter for the president, he was a trusted adviser and confidante.
Even Richard M. Nixon was in awe of his abilities. “You need a mind like Sorensen’s around you that’s clicking and clicking all the time,” Nixon once said.
Sorensen, who lived in Ridgefield in the 1970s, headed  Kennedy’s staff for the eight years he was a U.S. senator, and then spent three years as the president’s special counsel on domestic affairs.
Theodore Chaiken Sorensen was born in Nebraska in 1928.  His mother was a social worker, feminist and pacifist and his father, a Republican lawyer and Nebraska attorney general, had named his son after Theodore Roosevelt.
He graduated from the University of Nebraska with a law degree and in 1952 moved to Washington where he worked as a government lawyer. He was soon hired by Kennedy, a new Democratic senator from Massachusetts. The two shared many political ideals and values.
Kennedy often made use of Sorensen’s skill with the English language and, according to The New York Times, when Kennedy’s bestselling book, “Profiles in Courage,” was published in 1956, “it was no great secret that Mr. Sorensen’s intellect was an integral part of the book. Sorensen later admitted he drafted most of the chapters. “I’ve tried to keep it secret,” Sorensen told The Times.
During several years of traveling the country with Kennedy in preparation for his 1960 run for president, the two worked closely together on honing a message and voice. “He became a much better speaker,” he said. “I became much more equipped to write speeches for him. Day after day after day, he’s up there on the platform speaking, and I’m sitting in the audience listening, and I find out what works and what doesn’t, what fits his style.”
One of the Sorensen-written campaign speeches has been widely credited with helping turn the tide toward a Kennedy victory. The nation had never elected a Catholic president, and millions of voters were suspicious of his Catholicism. On Sept. 12, 1960, in an address to the Greater Houston Ministerial Association, Kennedy said,  “I am not the Catholic candidate for president. I am the Democratic Party candidate for president who also happens to be a Catholic. I do not speak for my Church on public matters – and the Church does not speak for me.”
While Sorensen’s job in the White House was domestic policy, Kennedy often sought his help with international issues, including when the Cuban missile crisis confronted the new president in 1962 after the CIA discovered the Soviets building missile sites in Cuba. “When he became president and was faced with the Cuban crisis, the first nuclear confrontation in history, I was involved,” he told Linette Burton of The Ridgefield Press. “The president had his own foreign policy advisers including, of course, the secretary of state, in the White House, and he called in 12 men whose judgment he trusted” — Sorensen among them. “No one had had experience in a thing like this, but we hammered it out together.”
Sorensen wound up drafting a sensitive letter from Kennedy to Soviet premiere Nikita Khrushchev. “Time was short,” he later told The Times. “The hawks were rising. Kennedy could keep control of his own government, but one never knew whether the advocates of bombing and invasion might somehow gain the upper hand.
The letter called for a peaceful solution to the conflict. “I knew that any mistakes in my letter — anything that angered or soured Khrushchev — could result in the end of America, maybe the end of the world.”
Soon, however, negotiations and a U.S. quarantine on Soviet ships approaching Cuba led to Khrushchev's withdrawing the missiles.
Sorensen admitted worshipping Kennedy and when the president was killed, he was devastated. He dropped out of government service for a while, but returned in 1970, two years after Robert F. Kennedy was assassinated. He ran for Bobby Kennedy’s senate seat from New York. He later admitted it was a mistake. “I simply thought that if I were to carry on the Kennedy legacy, if I were to perpetuate the ideals of John Kennedy, as Robert Kennedy tried to do, that I would need to be in public office. Frankly, it was an act of hubris on my part.”
After his defeat he returned to his law practice. But when he moved to Bennett’s Farm Road in 1972, Sorensen told interviewer Burton, “I’m young enough to think I’ll be back in government.”
And he was right.
In 1976, President Jimmy Carter nominated Sorensen to be director of the Central Intelligence Agency. However, after a storm of protest connected with charges he had leaked classified information as a Kennedy adviser,  Sorensen withdrew.
The next year, Carter named him to the Presidential Advisory Committee for Trade Negotiations and he was involved in the late 1970s negotiations that led to turning the Panama Canal over to Panama in 1999.
He served President Clinton as a member of the President’s Commission on White House Fellowships and endowed a grant of his own: the Theodore C. Sorensen Research Fellowship at the John F. Kennedy Library in Boston; it helps scholars of domestic policy, political journalism, polling, and similar subjects.
Sorensen wrote several books, including “Kennedy,” “The Kennedy Legacy,” and “Watchmen in the Night: Presidential Accountability after Watergate.”


He later lived in Bedford, N.Y., and practiced law in New York City.  When he died in 2010 at the age of 82. The Times called him “one of the last links to John F. Kennedy’s administration … who did much to shape the president’s narrative, image and legacy.”