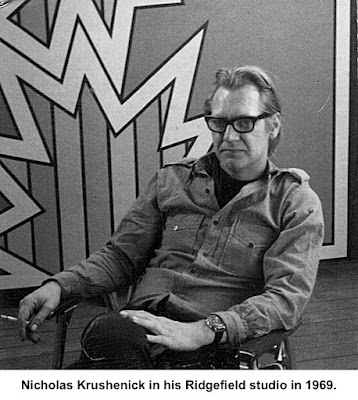 Nicholas Krushenick:
No Apples on A Table
“There are thousands of apples-on-a-table paintings,” abstract artist Nicholas Krushenick   told The Ridgefield Press in 1969. “I have a vocabulary of shapes that I hone and define. I can have no cliches of known values.”
A self-described “former starving artist,” Krushenick once supported himself by framing paintings and delivering them in an old Cadillac hearse.
His work, which has been called a combination of  Pop Art, Op Art, Abstract Expressionism, and Minimalism, was discovered in the early 1960s and his work is now widely known and displayed; The National Gallery of Art owns a dozen of his paintings, and his works are in the collections of the Metropolitan Museum of Art and the Museum of Modern Art, The Whitney Museum, and the Smithsonian Museum of American Art.
A native of New York City, Krushenick was born in 1929. One of his childhood memories was “of his fascination in watching a colorful mural progress toward completion in the Greek Orthodox church his family attended,” says the National Gallery.
While he was in the U.S. Army, he decided on a career as an artist and as soon as he was discharged, he entered the Art Students League in New York, studying from 1948 until 1950 under the GI Bill. He later studied under Hans Hoffman, a leading artist.
He then rented a studio and began to paint. “I revolted against commercial art,” he said in 1969. “I felt it would be ugly to sell myself that way.”
While he painted, he went through a decade of working at a variety of jobs to support himself including construction work and doing store window displays. “If you removed the mannequins, it would be art,” he said of his displays.
His career began to move in the early 1960s. While he was framing pictures, one of his clients was a man named Patrick Lannon and “one thing led to another and he bought seven paintings in 1963, long before the galleries became interested in me,” he said.
About the same time he was invited to paint the posters for the film, “Tom Jones,” which was 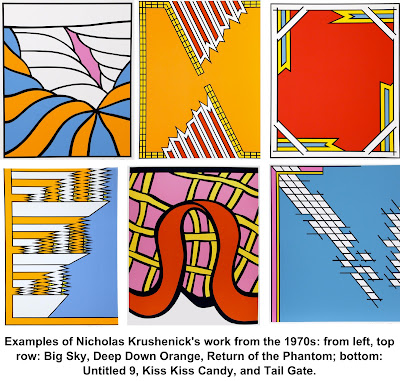 then playing in New York, and that spread his name and reputation as an artist. He began receiving invitations to exhibit at galleries and shows, and by 1967, he was invited to exhibit at the Expo ‘67 in Canada. Over the years his work has been shown in museums throughout North America, including the Aldrich, as well as in Europe and Australia.

He and his family moved to Ridgefield in 1967, living on West Lane. It was during the Vietnam War, of which the Army veteran was an outspoken critic. In 1970, he was among a group of artists who withdrew their paintings from the U.S. Pavilion at the Venice Biennale in protest against the war. He also donated a print to the Yale Art Department, which had organized an exhibition to raise money for the lawyers for the Black Panthers.
He moved to Stamford in 1972.
Krushenick eventually devoted less time to painting and more to teaching. He taught at such institutions as Cooper Union, Dartmouth, Cornell, the University of Wisconsin, Yale and especially, the University of Maryland. He also designed sets and costumes for stage productions including the Tyrone Guthrie Theatre's production of Haydn’s comic opera, “Man in the Moon.”
Krushenick died in his native New York City in 1999 at the age of 69. In recent years originals of his paintings have sold for more than $11,000 at auction.